Another good night on the South Steyne! Over 100 retailers and suppliers were there to celebrate a number of  events and awards. Not to mention Christmas! 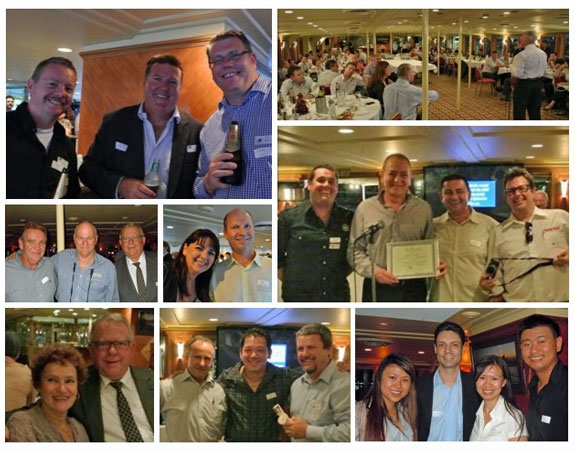 Our NSW PMA chairman, John Ralph, presented a special gift to Margaret James to commemorate her retirement after 39 years in the Industry, and the past 33 years in various roles with the Camera House organisation. Marg has been a major contributor to the group’s success and will be sorely missed. Hope you and Ian enjoy the South Coast, Marg!

Another industry stalwart who was mentioned last night and is retiring in December is Peter Cosham. Peter’s history in the industry goes back a long way, as a retailer in Victoria, then with his own business in Coffs Harbour and later with Haldex.We wish you well Peter!

It was great to see the strong support for a raffle in aid of The Cystic Fibrosis association.Thanks to PMA attendeees’ and sponsors’ generosity, over $762 was raised. Hopefully Qld and Vic will be able to raise a similar amount over the next week. Delighted to see my old friend Bob Myron of C-Direct winning first prize.

Independent Photo Supplies generously supplied a 12 months free membership to the IPI group which was won by Ken Tran from Macarthur Camera House.

And thanks once again to our sponsors Camera House, Fujifilm, CR Kennedy, Kodak, Adeal, Nikon, Maxwell International and Independent Photo Supplies for their generous support in enabling staff to attend at a subsidised price. We appreciate your help!