After 44 years  in the photo industry in the UK, USA and Australia, industry icon John Swainston has announced he is stepping down as managing director of Maxwell International Australia Pty Limited. 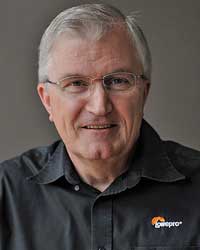 John Swainston will also pass on his remaining international responsibilities for the Asia Pacific arm of parent company DayMen, (Lowepro, JOBY, Acme Made) to Hong Kong-based senior vice-president, Robin Riley, who has led DayMen’s manufacturing arm in China over the past decade.

Maxwell will, from April, be under the leadership of long-time general manager, Sales & Marketing, Malcolm Pirie, who joined Maxwell International early in 2007.

John Swainston will continue on with DayMen in a part-time consulting capacity outside Australia. He said he is also looking forward to working with other non-competing businesses.

For the next 24 years John Swainston grew that business and acquired complementary distributorships until in October 2006, the company split into two. The Nikon business reverted to Nikon, which started its own Australian subsidiary, and a new entity, Maxwell International was established, handling Tamron, Lowepro, Velbon and Cokin.

In the new business, John ‘evangelised’ the value of accessories to specialists and consumer electronics retailers alike. Maxwell International more than doubled in size during the digital camera boom. Of recent times Tamron has been a star growth engine, as consumers seek out premium performance lenses to expand their capabilities.

‘Our industry has grown enormously overall, despite the recent retreat. Retailers like Paxton’s in Sydney, Camera House and Ted’s nationally, and individual specialists such as Michaels in Melbourne, Diamonds in Adelaide and Camera Electronic Services in Perth, have ensured that consumers still have excellent sources of quality advice and value, along with the popular consumer electronics houses such as Harvey Norman, JB HiFi, The Good Guys and Dick Smith,’ said John.

‘Australian pros are incredibly well served today by the likes of L&P and Kayell, under the leadership respectively of Bruce Pottinger and Rob Gatto. Canon’s commitment to the Canon APPA awards and Nikon’s with The Event, as well as their own several-thousand strong national body, the AIPP, under Ross Eason as president, also ensure success for the profession.

‘Over the years,’ said John, ‘I have had the wonderful privilege of making some great friends in this business, amongst dealers, competitors and professional customers. In that time I’ve also developed a passion for photographs and plan to keep up that involvement in my consulting days ahead.

He has mentored five young AIPP members this past year, which he described as one of his most fulfilling experiences yet, involving coaching, mentoring and business development.

‘Seeing how one’s experience can help guide new entrants into the photo-video profession, and go beyond the undoubted craft skill they all have into a profitable business model, is such an important step. I hope that the AIPP (mentoring) initiative previously under the late Ian McKenzie’s guidance, now under Queensland-based Eric Victor, will prove enduring.

John was quick to respond when asked to nominate his highlights over the years.

‘There are four things I think were really important. First, soon after I arrived in Australia, by coincidence, PMA established itself under Les Brener. For two decades it served the retail industry incredibly well. Also under Terry Rimmer and Peter Rose. That, in collaboration with the PICA/IDEA trade shows kept photography to the forefront of consumers’ minds.

‘Second, at Maxwell and Nikon we made an early commitment to Press Photography and the profession, starting Nikon Professional Services (NPS) in 1982 for the Brisbane Commonwealth Games and pioneering annual Press Photo awards that run to this day as the Nikon-Walkley Press Photo awards. Many of those winners have gone on to be recognized globally in the World Press Photo awards.

‘Third, Nikon Club Australia, which reached a peak membership of over 16,000 active members receiving a quarterly magazine with expert advice, encouraged and rewarded serious amateurs in a way that few other loyalty programs worldwide have reached or exceeded since. Under the editorship of Melissa Coleman and editorial backbone of Glenn Watson, this kept our brand right up there in a highly competitive environment against a very strong and worthy competitor, Canon Australia.

‘Lastly, in recent years, through Maxwell, especially with Lowepro and more recently with JOBY, we have delivered some great accessory opportunities that have made money for retailers and delivered great carrying and support experiences for consumers. Brand remains immensely important, much more so than price. I hope in the future that retailers continue to recognize just what a large proportion of their margins have and should come from quality branded accessories.

‘Buying better means nothing if the consumer does not get the value or quality they want. Retailers get significant contributions of support from local suppliers and cutting them out will ensure the consumer never hears the voice of great brands, which is what they seek out.’

The future
After fulfilling some commitments in April, a short family holiday in Europe is on the cards early in their summer. Then the focus will be on a book he’s planned for over a decade. It will be about Australian photographers, and is due for publication by the end of next year. And with some free time at his disposal at last, he also has plans to work on his own photography.

He will be in Perth later this month for the half-yearly Camera House Conference to say a few personal farewells.

‘Alan Small as the then-chairman of Camera House, re-launched the organisation just two weeks after we started Maxwell Optical in May, 1983. No one should under-emphasize the contribution that Alan made to the whole industry at that time. His drive and passion created a whole generation of very successful retailers in Camera House across the country.

‘Mark Alderson and most recently Lance Miller have continued to ensure specialist retailers survive and prosper in times of great change. This industry was built by people with passion for great retailing and expertise. It’s what consumers most respond to. It’s wonderful to see some of those names still doing great business. Richard Robertson, formerly MD at Ted’s, was another visionary leader, who made a great deal of difference and, as the late Ron Evans often said, “you always want to be seen to be successful in a successful industry. ”

‘While the future will be very different from the past, I am convinced that images will remain one of the most valued things in people’s lives for decades to come. It’s up to a new generation to take the torch forwards to the bright future that’s ahead for retailers and distributors ready for change, excited by technology and able to deliver great experiences for their customers, at a price people are prepared to pay for,’ he concluded.

Unmatched industry contribution
As well as distinguishing himself year in, year out, as the man with the camera in his hand at industry functions (mostly a top-end Nikon with a serious-looking Speedlight) John Swainston, has more than anyone else in the industry over the past three decades, contributed continuously and generously to industry associations and initiatives.

‘When I came to Australia the industry, except for Kodak, had no market data. Within the PIC, in 1979, we started data gathering for the first time on a sell-in basis, using a public accounting firm as the independent arbiter. I headed that up with Derek Plante.

‘As President of PIC in 1982 we worked to merge the wholesale industry and succeeded in reaching agreement with PIMA to form PICA, covering both consumer and pro markets. John Koens, Brian D’Arcy and Peter Rattray all made that much easier. We then tried to pull off one leg too far in APIA, which was to be an umbrella body. But in doing so it set the scene for possibly the closest working relationship between associations and photo interests, for we have always since had strong dialogue with the profession, something absent in much of the rest of the world. Val Forman and Ian McKenzie of the then IAP were key players in making that happen.

‘Paul Curtis also managed to cover both amateur and professional subject matter when he produced copy for regional newspapers and radio stations and was a tireless contributor.

‘I was twice president of PICA, in the tough times of the first Gulf War where we succeeded in scaling back Ben Hur-like exhibition stands and cut our coat according to the tough times of the day. Again in 2006-7 I felt a lower operating cost for the association was essential as the industry experienced rapidly falling hardware prices and revenues. I worked consistently with Roy Pung (PMA) and his staff to ensure Australians regularly spoke at US conventions and people like Rob Tolmie (National Photo), Michael Warshall (Nulab) and others became valued global players in their fields, as they still are today.

‘In 2000, several of us were concerned that the founding objectives of the Australian Centre for Photography in Paddington, Sydney, has lost their way. Working with Les Brener of PMA and professionals David Moore, Chris Shain and North Sullivan, we managed to get Les and me onto the Board at the same time as a new director came on board. Working hard to support Alastair Foster in his new role, and under the outstanding leadership of Joanna Capon as chair, the ACP rapidly became once again a leading International player for the promotion of photo media and photo education.

‘One of the most enjoyable tasks was working for a decade every month as the photo correspondent on ‘Australia Overnight’ for the Macquarie Network, hosted by 2GB in Sydney. Initially I worked with radio legend Owen Delaney, and the 90 minutes passed rapidly between 12.30 and 2.00am on the first Saturday night of each month. There were 600,000 listeners on 35 stations, and we had both technical and artistic dialogue that still leaves a warm spot.

“And I can’t overlook the importance of camera club talks. I still go there. They remain the best possible feedback for where enthusiast photographers are at with photography, and I am privileged to be the junior patron of St. George Leagues Club Photo Society, under the senior patron, legendary photo educator Des Crawley. I learn as much as I impart at these events, and the warmth and fellowship and the huge influx of new younger members is both exciting and uplifting.

‘Participating in one’s industry in all its aspects has made for a very rapid transition of 44 years. Happily I am not fully retiring, but I am happy I won’t be faced with another 200 days of travel each year, as I have in the past year.’