John is the first AIPP president who is not a working photographer. (It’s also unlikely that the AIPP has ever had a co-opted Board member elected president, but we were unable to check records prior to publication.) His decades of photo industry experience and contributions on many business and industry association boards over the years see him as a canny choice to guide the AIPP following the tumult of the last 12 months or so.

John moved to Australia from the UK in 1979, working as group general manager for Bell and Howell Australia, responsible for Audio Visual and Consumer Photo operations. Three years later John, along with John Bleakley, started a new company, Maxwell Optical Industries, to take on distribution of Nikon.

John has been an active participant in many industry events and initiatives over the years.  He is also an accomplished photographer. Read more here. He says he’s committed to growing and strengthening the Institute.

Bruce Pottinger was the principal of respected, much-lamented Sydney distributor and reseller, L&P Digital Photographic, which sadly shut its doors last year after almost four decades of operation. L&P was a long-term trade partner of the AIPP, and Bruce will use his marketing experience and extensive network of industry associates to help the Institute develop and maintain partnerships with sponsors. 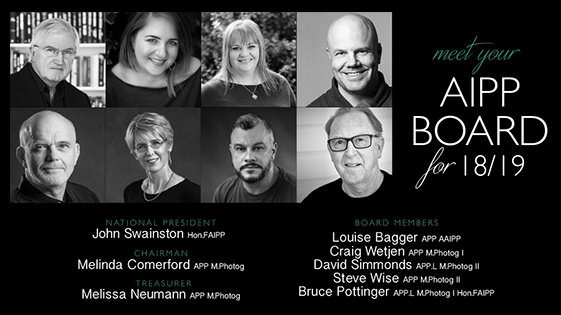 John Swainston and Melinda Comerford will focus on their duties as president and treasurer respectively.

‘As we explained after our first meeting, we decided to hold off on immediately electing the roles of president and treasurer as we wanted to get to know each other’s strengths as fellow directors before installing these pivotal roles,’ the AIPP e-mail to members said.
‘Having just had our third meeting, we are happy to announce that John Swainston has been elected to the position of president. John has served on the Board for over 12 months as a co-opted director, making him eligible for the position under section 50 ii of the Constitution. Previously, John was the Board’s treasurer from 2017-2018.’

John said in an e-mail to members that so far the AIPP has cut around a quarter of a million dollars from base operating costs.

‘If membership stabilises at a level 10 percent below today’s level, we can assume a healthy recovery over the next 24 months. There is still a six-figure sum in the bank. We are not broke,’ he said. ‘Through brilliant volunteer skills and hard work over the past seven weeks, the Institute is rapidly transforming itself back into a much more self-run organisation, bringing out member capabilities we didn’t even know we had. In recent years we almost never asked. That’s a big change. 20 years ago our local chapters knew where the skills were, even without email or social media. The AIPP for tomorrow will be much more organic and grassroots, and with a greater role for States to once again have some autonomy, naturally within appropriate levels of accountability and responsibility. ‘

Volunteers have undertaken tasks previously held by the paid staff at National Office. John says this isn’t sustainable, as it will eventually affect the volunteers’ businesses. The board is exploring ‘new methods to operate IT services, contract accounting, ensure your privacy and confidential data remains that way, as well as starting to reach out to our partners’.

The board has prioritised seven points to work on: member communication; regional membership involvement; restoring financial strength and streamlining operations; education and professional development; mentoring program development; operating the awards; and promoting the AIPP brand and its membership, along with maximising advocacy efforts on issues affecting professional photographers.

These are areas that disgruntled former and current AIPP members demanded the Institute address at the beginning of the year.
– Will Shipton, ProCounter