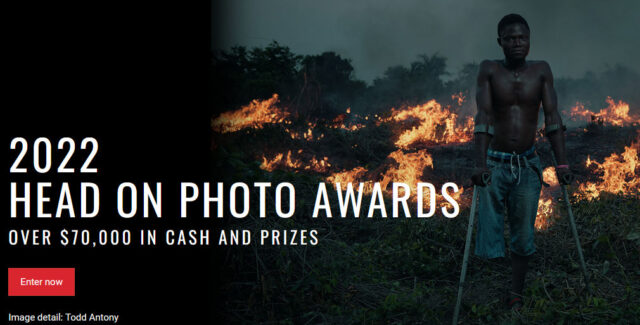 The Awards are divided into three categories, with the Portrait and Landscape first prize a meaty $15K cash, as well as an additional prize pack to be announced. The Student Award, for K-12 youngsters, first prize is $500. Head On also awards runner ups for both international and local entrants.

All finalists images also feature in a centrepiece group exhibition at the photo festival, scheduled to run in Sydney from November 5 to November 20. The diversity of entries into the contest solidifies the contest as a crowd favourite and a major drawcard for visitors.

Last year the Portrait Prize exhibition showed at the stunning Paddington Reservoir Gardens, while the Landscape Awards appeared along the iconic Bondi Beach promenade. The exhibitions would have been viewed by tens of thousands of people for the festival’s duration, particularly with the heavy foot traffic along Bondi. Both venues will be utilised again this year.

For those unfamiliar with the Head On Photo Awards, it’s one of the finest and most prestigious international contests based in Australia. The Head On Portrait Award is the foundation of the festival, first running in 2004 after organisers became irritated with the repetitive nature of institution-operated photography prizes. They always seemed to award big cash prizes to the same photographers, particularly those with celebrity subjects, and it was all a bit predictable.

In response to this, Head On was born as a photography contest run by, and for, photographers. An anonymous entrant system, where the name of the photographer is hidden, was adopted to ensure each work is judged solely on the merit of the photo resulting in a contest that endeavoured for a fair playing field. It was so popular that by 2010, organisers were in a position to expand the portrait prize into an international photo festival.

This philosophy of equality and fairness carries over into all aspects of the festival, including the exhibition selection, resulting in a naturally diverse program each year.

Past Awards exhibitions have also toured to New York, Auckland, Pingyao, and India.