Head On: How to win photo contests

The Head On Foundation has dished the dirt on how photo contest entrants can stand out from the crowd and improve their chances of winning. 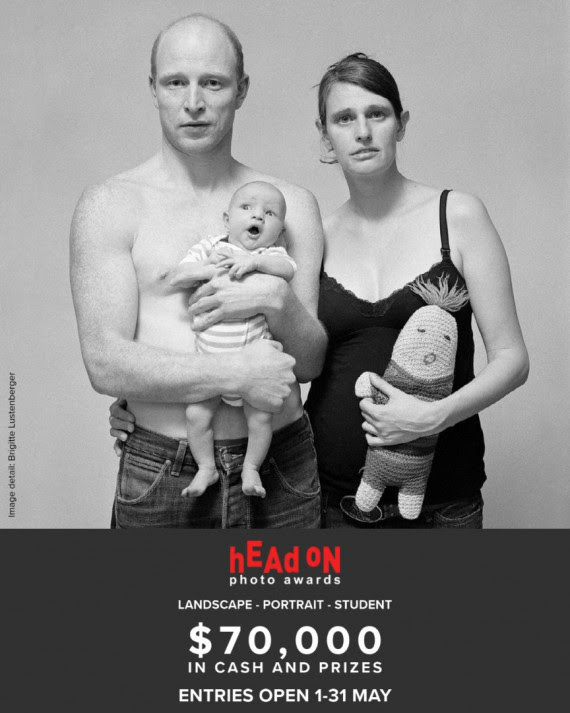 The photo contest tips appear in a free recorded online workshop, with the information ideal for entering all competitions including the Head On Awards, which close on May 31.

The workshop is hosted by Head On founder, Moshe Rosenzveig, who has entered and judged more photo contests than most.

The Head On Foundation is most well-known for hosting Australia’s largest international photography festival in Sydney. But it all began in 2004 as a portrait prize that sought to select winners based on the merit of their photo, rather than be influenced by their professional credentials. This was in response to the big institutional photo prizes, which has a tendency to pick a big name winner.

‘We decided to do something that would allow everyone equal opportunity to get in,’ Moshe says in the workshop. It was a huge success and laid the foundation for the massive annual photo festival.

The workshop starts off with practical basics on why photographers should enter contests, and how to pick the right one. This involves a similar assessment to what Inside Imaging has promoted: Read the Terms and Conditions; find out who is running the contest, and how long it has been running for; what are the prizes and sponsors; who is on the judging; what is the cost for entry; what pictures won in previous years; and what sort of publicity is generated from the awards. By collecting this information, a photographer can determine whether the contest is credible and right for them.

When it comes to the Head On Awards, there are a number of reasons why an image may not catch the attention of judges. Here’s a list!

It’s great image, but not the greatest

For example, there are always aerial photos entered in the landscape prize, so only the best aerial photo/s will win. If entering an aerial photo, consider whether it’s a standout of this style as the competition will be fierce.

Most photographers submit entries at the last minute and while they manage to just squeeze in, they still do themselves no favour. Each year Head On receives hundreds of submissions in the final hour before the contest closes, and this has caused the website to crash. But it’s beneficial to enter images sooner rather than later, as judges view the entries in order that they are submitted and may be feeling image fatigue towards the end.

‘They will see image number one at the beginning, and end up with the last image submitted on the final day at the very last minute. At that stage they might be very tired – they have “image fatigue” and you have less likelihood to be chosen.’

Ideally, judges are responsible and wouldn’t allow fatigue or hunger impair their judgement. But the subconscious is a powerful thing, and even the best judge cannot be 100 percent sure that hidden internal forces aren’t influencing their decision making. Back in 2019, Inside Imaging spoke with Dale Neill, founder of the Fremantle International Portrait Prize (FIPP), who observed that ‘accidental bias‘ happens in photo contest judging. After a tea or lunch break, judges tend to be more forgiving thanks partly to a full belly and sugar rush.

Avoid this at all costs. Sunsets or iconic and famous landmarks , for example, rarely score well. But Moshe highlights there are always exceptions to his tips, including this one. Sometimes new or exceptional happens during a sunset or at a famous landmark.

This is an obvious one. If there is a shooting style or trend taking over photography, judges are usually aware of it and won’t be won over. A few years ago, it was trendy to de-saturate images, and leave one section with colour. These images never boded well at the Head On awards.

Most photo contest judging is done online, meaning the images are viewed on a computer screen. The first round of Head On judging is done like this, however the finalists’ submissions are printed and judged in person. Complicated images are generally harder to digest in digital form, so when there is too much information a judge may be inclined to immediately dismiss it. Again, there are exceptions to this rule, but it’s possible the nuance or important elements will be missed if there is too much information.

When there are thousands of images being assessed, a judge may only spend a handful of seconds on each submission.

This is another obvious one. If the image isn’t a great file, or lacks technically, then it may be ignored. At Head On, the judges are mindful that the finalists’ pictures show in an exhibition, so they must look good as high quality prints and this requires a good quality image file. Now onto the exception to this rule. Some photographers deliberately fudge the technical aspects for a conceptual reason that may prove beneficial. Also a photographer may capture an amazing moment in time, and this renders the technical quality less important.

It’s a good idea to be familiar with the rules of the contest. Sometimes there might be a specific theme, and fantastic images don’t win because they ignore the theme. The Head On Portrait Award often receives images that aren’t considered portraits, such as wildlife pictures. Although there have been instances where a submission doesn’t show a traditional portrait and pushes the boundaries in a meaningful way. This may catch the judges’ attention and perform well, but it’s a bold move.

Think about who they are, and what may grab their attention. If it’s a curator or picture editor, check out what they’ve done and consider whether there could be something that resonates with them. If the judging panel includes ‘landscape purists’, it’s possible that heavily manipulated images won’t perform so well, and vice versa.

Photographers can enter contests with the intention to build connections with a jury panel. Sometimes having work seen by an individual on the jury panel is a standalone reason to enter, and this outcome can be even more valuable than winning the contest.

Inside Imaging attended a 2018 Head On workshop featuring American photographer, Nancy Borowick, who explained how she got a personal project off the ground by entering a contest she had no plan of winning. A well-known picture editor was on the jury panel, and she hoped they would take an interest in the project. It worked, and was the catalyst to opportunities that ultimately resulted in her being a guest of honour at Head On.

More practical advice and information is available in the online workshop. Click here.

Entries for the Head On Photo Awards are closing on May 31, with over $70,000 in prizes available, and the opportunity to be included in a major festival exhibition.

The Head On Photo Awards consist of two primary categories, Portrait and Landscape, along with a Student prize for Australia K-12 photographers.

Winners of the Portrait and Landscape Award win $15,000 cash and photography equipment. In total there are 40 finalists across all three categories, whose images are exhibited at a key venue during the Head On Photo Festival. In previous years the Portrait exhibition shows at the Festival Hub and the Landscape show appears at Parliament House.