OLYMPUS OM-D E-M5 Mark III: The long-awaited (and worth the wait) update to the popular E-M5 brings higher resolution, the latest TruePic VIII processor and an updated autofocusing system to a popular consumer-level camera. It’s been designed for photo enthusiasts who want the benefits a smaller and lighter camera system can bring over larger and heavier DSLR cameras.
RRP: $1999 body only. 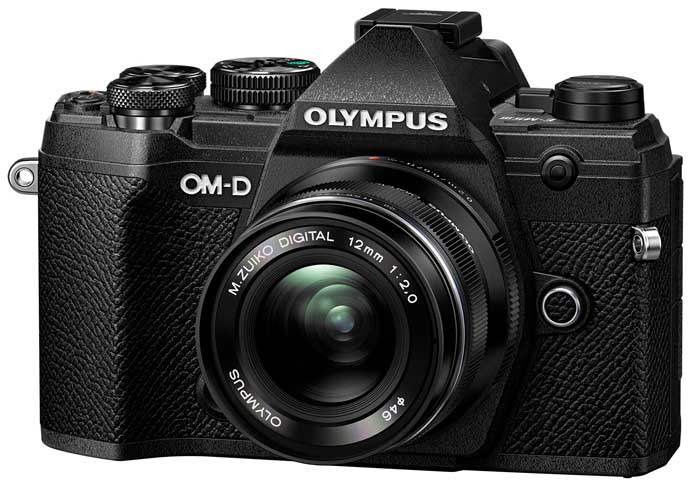 Olympus has made some significant improvements to its OM-D E-M5 camera, with the Mark III model arriving in a slightly smaller and lighter weather-sealed body and sporting the same 20.4-megapixel sensor as the OM-D E-M1 Mark II. It also inherits the E-MI II’s 121-point, all cross-type On-chip Phase Detection AF system, along with updated processing algorithms as well as the articulated LCD touchscreen monitor on the rear panel. A few changes have been made to the control layout to make it more like the E-M1 II, and the grip and thumb rest have been enlarged. Five millimetres has been added to the viewfinder eye relief to make it more comfortable for glasses wearers.

Internally, improvements have been made to the SSWF (Super Sonic Wave Filter) and in-body 5-axis Image Stabilisation (IS) system, with the latter claiming up to 5.5 stops of shake correction. Digital IS has been added for shooting movies, albeit with slight frame cropping. Continuous shooting is supported at up to 10 fps with the mechanical shutter or up to 30 fps with focus locked on the first frame in the Pro Capture mode.

The bundled FL-LM3 flash is relatively weak, but the hot shoe above the EVF can accept more powerful flashguns. The only real downside is the use of the BLS-50, which was chosen because of its light weight. It’s the same as in the E-M10 III and only rated for approximately 310 shots/charge. Fortunately, an optional battery grip (ECG-5) is available for those who need greater capacity.

1. The same 20.4-megapixel Live MOS sensor as the OM-D E-M1 Mark II with the latest TruePic VIII processors to deliver faster image processing and support 4K video recording.
2. The 121-point all-cross-type hybrid AF system supports face and eye detection and provides better precision and tracking performance for moving subjects as well as convenient centre priority and centre start modes with the C-AF setting. Touch AF is supported and the AF Targeting Pad can be used to move the AF point while looking through the viewfinder.
3. Improvements to the 5-axis sensor-shift image stabilisation system enable it to synchronise with in-lens IS systems to enable up to 5.5EV of shake correction.
4. The control layout is much more like the layout on the E-M1 Mark II, making the E-M5 Mark III a viable choice as a second camera body.
5. A separate memory card slot is provided on the right hand side panel and the camera is compatible with the fastest UHS-II cards.
6. In-camera effects include 16 Art Filters, Live Composite and HDR Composite modes and focus bracketing and stacking capabilities.
7. The camera also provides a similar Tripod High Res Shot mode to the E-M1 Mark II with the ability to combine eight sequential shots to produce a 50-megapixel image.
8. Both C4K and 4K video can be recorded at 25 fps or 24 fps with a 237 Mbps bit rate for the former (or 102 Mbps for regular UHD 4K. A ‘Flat’ Picture Mode to make colour grading easier with Blackmagic’s DaVinci Resolve software and a dedicated LUT (look-up table) file is available for downloading from the Olympus website.
9. The Live Time setting provides plenty of scope for taking long exposures, again with the camera tripod-mounted.
10. The Focus Bracketing setting can record up to 999 frames in a single exposure while shifting the focal position slightly between each shot with 10 levels of shift selectable. In-camera focus stacking is also supported.
– Margaret Brown