CANON EOS-1D X Mark III: Released ahead of the 2020 Tokyo Olympics, Canon says its third generation flagship professional DSLR has been developed with feedback from professional photographers. The EOS-1D X Mark III enables Canon to remain at the cutting edge of digital SLR technology.  The introduction of the HEIF file format and RAW video recording will help it to maintain this position. Almost every feature has been improved in the latest model, including a much-needed upgrade to touch-screen capabilities.
RRP: $11,299 (body only, with 512GB CFExpress card). 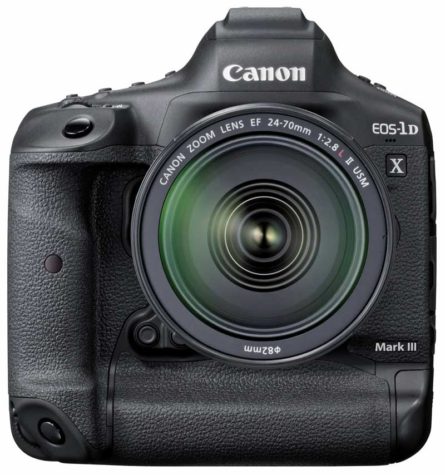 As expected, the new camera’s magnesium alloy body retains the trusted ergonomics of previous models and includes extensive weatherproof sealing. Its new-generation 20.1-megapixel sensor is paired with a new DIGIC X processor that is 3.1x faster than the Dual DIGIC 6+ processors in the EOS-1D X Mark II. A new High Detail Low-Pass Filter over the sensor samples light over a greater number of points to produce sharper, more detailed images while preventing moiré. The Mark III comes with buttons that light-up in dimly-lit conditions and when the display light button is pressed. New ‘smart controller’ functions are integrated into the AF-ON buttons, making it easy to shift AF points on-the-fly in both landscape and portrait orientations.

The phase-detection AF sensor is new, with 191 selectable AF points, 155 of them cross-type. It’s coupled to a DIGIC 8 chip with ‘deep learning’ programming, which is used in the camera’s AF system to enable the focus to lock onto a subject’s head or face even when the subject’s eyes are covered by a helmet or goggles. Dual Pixel CMOS AF is supported when shooting in Live View mode with 525 segments covering 90 percent of the frame horizontally and 100 percent vertically.

The EOS-1D X Mark III is the first camera to include HEIF image files (High Efficiency Image File Format), which enables images with 10-bits of data to be saved in a file that is the same size as a JPEG, but with fewer compression artefacts and a noticeably wider dynamic range. It is also the first non-cinema Canon camera to feature RAW recording in movie mode, enabling a wider range of colours and tones to be extracted in post-production. Video can also be recorded as 12-bit CRM file at 5.5K (5472 x 2886) resolution, allowing very detailed oversampled 4K footage to be extracted. Clips can be recorded using Canon Log Gamma and captured as a 10-bit HEVC/H.265 file, which is ideal for post-production editing. The Mark III is also the first with 5-axis image stabilisation for video.

Wi-Fi and Bluetooth are built-in, as is GPS for data logging. The Wi-Fi can be used for FTP or connecting via EOS Utility as well as connecting to a smartphone. 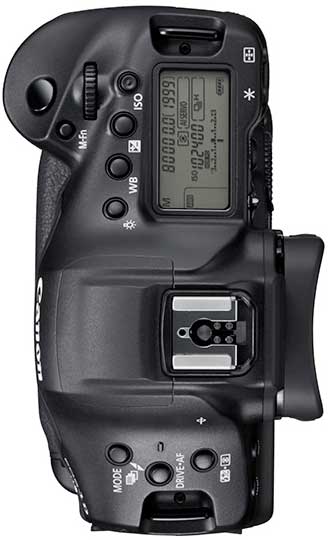 1. The body of the new camera is 90 grams lighter than its predecessor without sacrificing weatherproof sealing or ergonomics. Transitioning from the Mark II to the Mark III should be virtually seamless.
2. The mirror mechanism has been totally redesigned and is robust enough to support high-speed continuous shooting (up to 16 fps with the mechanical shutter), including with long and heavy super-telephoto lenses. Sub-mirror bounce is substantially reduced, giving the AF system more time to get a stabilised view of light rays directed to the AF sensor.
3. The shutter has been durability tested to 500,000 exposures, up from 400,000 on the Mark II. It includes friction-reduction and a new wet-type braking mechanism to reduce bounce and improve performance.
4. Dual media slots are provided for CFexpress cards, Type B size. XQD cards cannot be used in this camera and there are currently no plans to provide support through firmware updates.
5. Power management has been dramatically improved. The LP-E19 battery is now rated at approximately 2580 shots/charge with the viewfinder or 610 shots/charge or over four hours of movie recording in Live View mode.
6. The hybrid AF system has been improved, with the viewfinder-based system having its own 191-point AF array and roughly 100 times more pixels than previous Canon 61-point AF sensors. Every point in the 191-point AF array can be manually selected by the photographer, and a variety of AF Area selection possibilities are available.
7. Live View focusing uses Dual Pixel CMOS AF with a 3869-point array covering 100 percent of the frame vertically and 90 percent horizontally. Up to 525 AF points can be selected for Face Detect + Tracking (automatic AF point selection). Servo AF is available with Live View at up to 20 fps with the electronic shutter for capturing moving subjects. Depth information makes it easier for the camera to isolate subjects from backgrounds with similar tones and/or colours.
8. The Mark III allows RAW+JPEG image pairs to be recorded at various sizes, including Canon’s C-RAW format. There’s also the option to record RAW+ HEIF (High Efficiency Image Format) pairs, which can record a much wider dynamic range than JPEGs. HEIF files are saved with the *.HIF suffix, but they can only be captured with the mechanical shutter and must be converted into editable formats with Canon’s Digital Photo Professional software.
9. In addition to the video recording capabilities of the previous model, the Mark III is the first non-cinema EOS mode capable of recording 5.5K 12-bit RAW video with a 17:9 aspect ratio at frame rates up to 60 fps. Users can also choose between the movie-centric 4K DCI production format or the television/web-centric 4K UHD production format, as well as the Full HD format (where frame rates up to 120/100 fps are available for recordings without audio).
10. Uncompressed 4K (DCI or UHD) video can be output to an external recorder via the HDMI interface and non-linear editing plugins are available from both Avid and Apple, with the Canon Digital Photo Professional (DPP) software another option for video development.
11. The EOS-1D X Mark III is the first EOS-1 series camera equipped with built-in Wi-Fi and Bluetooth. It also includes integrated GPS technology for location data logging.
12. Wi-Fi can be used for connecting to an FTP server or to a computer via EOS Utility software, as well as to a smartphone via the Camera Connect app. The optional Wireless File Transmitter WFT-E9 can connect the camera to a wireless LAN and provide transfer speeds and capabilities to meet most professional requirements.
– Margaret Brown

The Canon EOS-1D X Mark III has been awarded an Editor’s Choice award in Margaret’s more extensive review on the Photo Review website.