JA Davey has flagged early 2015 availability of the DNP DS80-DX, a dye sublimation photo printer which produces both double-sided (duplex) and single-sided (simplex) prints up to 8×12 inches. 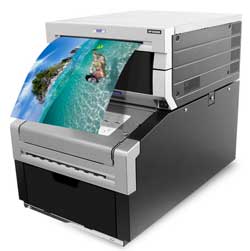 The DS80-DX is effectively a duplex-capable version of the proven DNP DS80 printer. It expands dye-sub printing to products such as photobooks, calendars and double-sided cards, at a much higher quality than electro-static duplex printers.

Single-sided prints use roll-type receiver paper and duplex prints use sheet-type paper, which can be set at the same time, avoiding media switching and enabling a single printer to cater to both duplex and simplex demand. Media is loaded from the front of the printer.

Gloss or matte finish can be chosen for either duplex or simplex prints. An overcoat finish makes the DS80-DX attractive for products such as photobooks, that demand a non-sticky print surface.

The DNP DS80-DX will be available in Australia first quarter 2015, with pricing to be released closer to release date. JA Davey says that it will be offered with a range of sofwate options for photo books, etc.