On Sunday afternoon, September 15, as things were beginning to wind down at the Melbourne Exhibition Centre on the final day of The Digital Show, Photo Counter asked a few exhibitors and show visitors for their impressions…

Peter Rose executive director, PMA Australia said that the numbers at The Digital Show seemed good based on the exit counts IDEA was conducting.

Responding to rumours – which PMA was doing little to hose down – that the retailers’ association was considering a Big Picture Show-type event for Australia – he said that PMA did not want to compete with IDEA, but rather find ways of working together.

When Photo Counter followed up with Mr Rose today, he confirmed that PMA had put a proposal to IDEA for a Big Picture Show event next year ‘which the IDEA executive has responded to in a positive vein’.

He said there were a range of issues to be worked through before any kind of official announcement could be made.

Addressing the PMA Convention, he said that it had worked better this year as a single stream of sessions.

‘There was not as much quantity (of sessions),’ he said, ‘but feedback is that the quality was much better.’

He conceded numbers at the convention were disappointing.

‘There’s no question that we would like to see more more people here. Each year numbers seem to diminish, and it’s the same faces. I don’t know the answer to that.’ 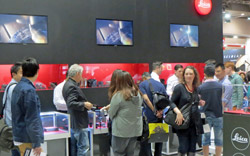 He said that one of the reasons numbers were down was that Camera House holds its annual member convention and trade show next month so there was a clash in timing. Also, we now have a show which is aimed at the public for the full three days. ‘There is less trade here, so our show suffers too.’

One notion being considered was to work with both Camera House and Leading Edge Digital to organise a kind of ‘omnibus event’.

‘In discussions with both Camera House and Leading Edge they agree it would be preferable to all hold an event together and have break-out sessions for each group,’ said Mr Rose. ‘The trade is shrinking and we need to find ways of being more cost-effective.’

James Murray, (IDEA president and Nikon) who we also spoke to today, said IDEA was happy with how it went, and feedback from most exhibitors was positive

Although measurement of visitors wasn’t as rigorous as in previous years,when each visitor wore a barcoded name tag, he was confident from measures IDEA had made – supported by his own experience on the Nikon stand over the three days, that numbers were well up on last year.

‘This is the first time we have had three full consumer days, so you would expect that.’ he said.

‘It shows that when we engage the consumer the response is that they are ready to get more involved.’

He said that while there had been flat spots on Friday and again on Sunday afternoon last year, this year the stand was steadily busy over the three days.

Wearing his company hat, Mr Murray said that Nikon was retailing from the stand, though not particularly aggressively, and at prices between RRP and retail street pricing. Overall, some retailer offers available from the the stand were more attractive than the prices Nikon itself was asking.

By contrast, across the aisle Canon’s retailing was far more ‘in your face’ and highlighted low price points.

Mr Murray described Nikon’s retailing approach at the show as providing ‘a consumer solution rather than an aggressive retail proposition.’

Stuart Holmes, managing director, IPS, had one of the few business-to business exhibition stands and was pleased with the outcome.

‘It’s been a good show. There has been a smaller number, but high quality attendees. In the last two days we’ve seen all the people we want to speak with and have a full prospect list. The stand has been well-attended and products well-received.

He singled out the new Kodak WiFi kiosk as a stand-out on the stand.

He said the organisation of the PMA sessions helped IPS and ‘the quality of the sessions is a drawcard for our kind of customers.’

‘The people who come to events like this are the survivors, pushing their businesses forward and assuming leadership roles in the industry.’

He added that overall the range of exhibitors was disappointing, and suggested the event should be held every second (non-Photokina) year, and it should be held in August rather than September.

David Burlew, the newly-appointed Adeal chief operating officer, was clearly positive about his first annual photographic equipment exhibition – and particularly happy that it co-incided with Manfrotto’s launch of lens filters.

He said the filters have been very well-received, with people seeing their introduction as a natural progression for Manfrotto. He added that is was also an opportunity to show Manfrotto’s LED lighting range, which some people were unaware of until the show.

‘The Manfrotto filter launch begins a new chapter,’ he said. ‘The three days have been terrific, with lots of traffic, high enquiry levels and high energy levels on the stand.

Adeal invited retailers (DigiDirect, Vanbar and Borge Anderson) each to attend for one day to handle sales. He said Adeal had no intention of following the trend towards wholesalers going direct to the consumer.

‘We are definitely sticking to our knitting,’ he said. ‘We are wholesalers, and that’s what we will continue to do.’

He nominated the Manfrotto BeFree miniature tripod as one particular product which was ‘flying off the shelves’.

Joe Tizzone, sales and marketing manager, OIympus, said the show was ‘a huge hit for us’ and set the scene for a successful lead-in to Christmas.

Star on the Olympus stand was clearly the newly released Olympus OM-D EM1.

‘The priority for us for the show is to showcase the EM1 and a full range of accessories. There’s been a steady flow of traffic and we’ve given away 5000 showbags in two days. It’s definitely been a success for us, with lots of pre-sales enquiries,’ said Mr Tizzone.

‘The EM5 was a game changer for us. We are hoping the EM1 will take us to next level, and from feedback at the show, it will.

‘It’s great when you have something new to show people’, he added.

Olympus was not selling from the stand as were its competitors Canon and Nikon.

‘We would rather work with retailers so we have their support,’ said Mr Tizzone.

Clem Kennedy (CR Kennedy) said the show was worthwhile for CR Kennedy in providing an opportunity to engage with the end user and get feedback from the enthusiast market. 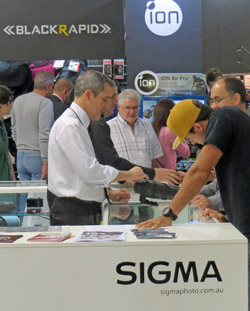 It also provided a platform for CR Kennedy to show its new Tokina, Hoya and Black Rapid lines.

‘Another good thing about a show like this is we can put every single product on display,’ he said.

‘It’s still a valuable event. Although I don’t like the time of year, especially the clash with Photokina.’ He said March or perhaps October would be preferable, and he pondered whether the show format requires a re-think, as it is currently trying to be ‘all things to all people’.

He also suggested a name change to something like The Camera Show’: ‘The audience we are attracting is enthusiast – so why not?’

CR Kennedy was selling accessories from the stand but not cameras, and that was largely to fulfill consumer expectations.

‘One of the top reasons for some people coming to a show like this is to get a good deal. We are not doing it to steal sales or make extra margin but basically as a service,’ he said, adding that it would good if retailers were able to play a role.

Bruce Connelly (Giclee Media Supplies) a regular exhibitor at previous annual photo shows, this year decided to do something different, taking a smaller stand in the adjacent Art and Frame 2013 event.

With an investment in the thousands of dollars rather than tens of thousands, Mr Connelly was happy with the outcome.

‘The number of qualified leads was excellent,’ he said.

The several show goers we spoke to also enjoyed themselves:

Craig, a keen enthusiast, noted it was not as big as last year’s show ‘but still thoroughly enjoyable’. He also noted there weren’t as many demonstrations of studio photography as last year. A ‘Nikon man’, Craig didn’t notice the absence of Panasonic or Sony.

He thought the free entry hinted that the show wasn’t a success, and wouldn’t be held next year.

Andrew, a hobbyist, said he enjoyed the show and all the brands he was interested in were present, although he did notice the absence of Panasonic.

It was his first time at the show and he wouldn’t have known about it but for reference on a social networking site he is involved in (Meetup).

He said he would come again, and noted the big discounts on offer at the Canon stand.

Antonio, a film student with an interest in stills photography, was sporting a light reflector he had purchased on the Dragon Image stand for the knock-down price of $25.

He just happened to be walking past the exhibition centre and didn’t know it was on. He checked out the Canon lenses for about 20 minutes, made his purchase and was on his way again.

Amanda, ‘just a snapshooter’ described the show as ‘fantastic’. She and her partner had been there for about 90 minutes. She was a little confused and miffed about the free entry though, having already pre-registered.

They spent a lot of their time on the Olympus stand but praised the quality of the exhibitors and staff overall.

‘If you ask questions, they are able to give you good feedback,’ she said.