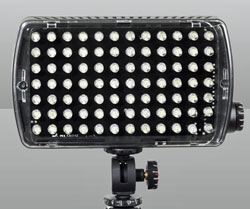 The ML840H is the largest and most powerful in the Manfrotto continuous LED light range. A neat ‘ball head to hotshoe’ system allows the ML840H to be pivoted, angled and turned to direct the light. It can be mounted on a flash hotshoe either horizontally or vertically thanks to the DUO feature with its two shoe attachments. This also allows multiple ML series lights to be stacked together to give an even stronger light. The ML840H can also be hand-held or fitted to numerous Manfrotto supports via its standard ¼” thread.

The ML840H has a flash setting, triggered by a sync cable, that emits a pulse of light four times brighter than the maximum continuous light it can produce. Plus, two useful light modifying accessories are included – a diffuser and two gels.

When used as a continuous light source, the ML840H’s 84 LEDs emit continuous light at a constant temperature of 5600°K (daylight), with an luminance of 850 LUX at a distance of 1m, but its variable dimmer allows precise control over light output and exposure, enabling the camera operator to reduce the glare of the light if the subject is close. The ML840H is a convenient, compact and portable light source. Like the smaller LED lights, it can be used off-camera as a photography light close to delicate subjects without overheating them. When fitted onto a DSLR hotshoe, the soft orange LEDs provide light so you can view the camera controls under low light conditions.

The ML840H has an in-built rechargeable lithium battery which will keep it lit at full brightness for approximately 1.5 hours. LEDs also have a longer lifespan than traditional bulbs and are shock-resistant.