The Canon EOS R5 has no clothes on!

Canon’s EOS R5 revolutionary 8K video capabilities now appear half baked and crippled by overheating issues. But before we got here, the Canon marketing department’s inflated claim of ‘cinema-standard specs’ was swallowed whole and amplified by the photo media, with the turn of events resembling the fable of The Emperor’s New Clothes. 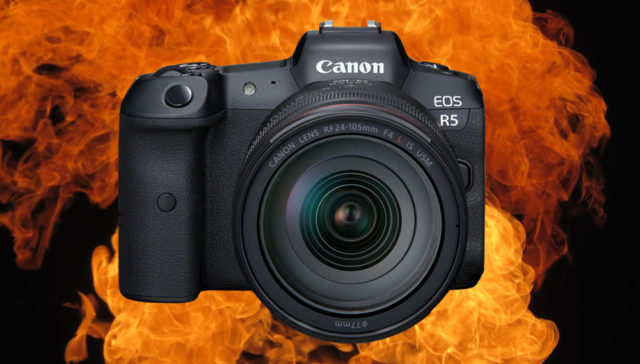 The Hans Christian Andersen story follows a vain emperor who is obsessed with spending lavishly on new clothes. Two swindlers claiming to make the most magnificent fabric are commissioned to weave new threads for the emperor. The don’t make anything, but inform the emperor that the clothes are so sophisticated they are invisible to anyone unworthy of seeing their magnificence. No courtier is brave enough to say they see nothing, so they heap praise on the ‘garments’. In the end, when the emperor struts out into public naked, a child innocently speaks the truth – the emperor has no clothes on – making everyone else involved seem either stupid, venal or cowardly.

The Canon R5 marketing campaign has been a wild ride. Through a program of deliberate leaks later confirmed by drip-fed specs, the R5 was sold first-and-foremost as a camera that shoots 8K/30P video. It seems likely Canon sought to re-visit one of its proudest moments, when it introduced groundbreaking video features in the 5D Mk II in 2008.

Before the curtains were pulled back and the R5 was finally revealed on July 9, the Canon marketing machine was firing on eight cylinders. A high point was in April when Canon confirmed the rumours it had previously leaked: the R5’s 8K video capabilities – ‘cinema industry-standard’ formats – would allow it to ‘shoot comfortably on high-end production sets’.

‘On the set of high-end productions such as commercials, dramas and documentaries, the EOS R5 is an ideal partner to the likes of Canon’s brand-new EOS C300 Mark III,’ the Canon Australia press release said.

Technical experts, who hadn’t tested or even held the yet-to-be-announced R5, began proclaiming the magnificence of Canon’s achievements.

‘The more we learn about the Canon EOS R5, the more excited we get. It significantly outmuscles everything else on the market, including the powerhouse Panasonic S1H – a camera so capable that it is certified by Netflix as a broadcast camera,’ wrote James Artaius for Digital Camera World (DCW).

Petapixel contributor, Jaron Schneider, described the R5 as ‘the most exciting camera‘ in over a decade. ‘I’m not one to generally heap praise on camera products that one, I haven’t tested or two, haven’t even been fully announced yet let alone released. But given what we know about Canon’s upcoming EOS R5, I have to change precedents, sit back and just clap.’

Why? Well, the ‘unprecedented gigantic technology leap’ that ‘puts to shame every other hybrid camera currently available and even outperforms almost every high-end cinema camera available’.

‘That body is tiny compared to any video camera with half the specifications that this camera will surpass. That fact alone will have major rippling effects on the industry. Not only is it pushing technology limits beyond anything we’ve seen before, but it’s also doing it in a body that’s arguably one of the smallest on the market.
That body also has no fan. Is all this more impressive from an industry standpoint than putting video in a DSLR for the first time?’

We felt obliged to call out Petapixel for ‘‘jumping the shark‘ on this one. Probably a good idea to actually double-check the specs against reality before such unqualified (in both senses) claims.

Here at Inside Imaging, we had the discomforting sense of being used. On the one hand you don’t want to be seen as not being across the stories of the day. On the other hand, you don’t want to feel you are the plaything of some Machiavellian spinmeister.

DPReview editor, Dale Baskin, compared the R5’s ‘technological achievement’ with what was shaping up to be another 5D Mk II moment. ‘It’s difficult to believe that the R5 wasn’t heavily influenced by Canon’s experience developing cinema products,’ he wrote. While Baskin does later qualify that spec sheets ‘don’t tell the whole story’ and 8K video will ‘generate a lot of heat’ without a fan, the article concludes that Canon has its mojo back.

‘The R5’s headline feature is 8K video. You may or may not need 8K video, but let’s acknowledge Canon for the technical achievement. After all, if it was easy other manufacturers would have done it already. From a marketing perspective, just having ‘8K’ on the box goes a long way.’

On July 9, the day of the big reveal, British filmmaker Andrew Reid from the EOS HD videography blog, was the first person to point out the flaw in the R5’s perceived brilliance. He published an overheating chart, which stated a best case overheating scenario: that after recording 8K for 20 minutes, the camera will overheat. It must then turn off for 10 minutes, and can then only record in 3 minute increments before overheating. Likewise, 4K was also prone to overheating.

Canon acknowledged the overheating, explaining it didn’t install a fan as it would jeopardise the size. With this ‘headline feature’ now appearing significantly limited, are the likes of Sony, Panasonic and Nikon really ‘put to shame’, as Schneider claims? Should he apologise to those camera makers?

It is little surprise, given the uber-hype, that overheating is now the big R5 story – also apparently impacting the R6 – and goodwill towards Canon seems to be running thinner than usual. Amazon’s camera marketing website, DPReview recently dived deep into the overheating issue, and it’s findings were not good.

While performing ‘in line with the limitations Canon acknowledged’, ‘the practical implications are that the cameras [R5 and R6] are prone to overheating if you shoot for extended periods and if you have crew or talent waiting to re-start shooting, they may take too long to recover’. Details also emerged emerging about the numerous variables outside of shooting video which contribute to overheating.

‘Even set to the mode designed to limit pre-recording temperature build-up, the clock is essentially running from the moment you turn the camera on. Video recording is the most processor-intensive (and hence most heat generating) thing you can do, but any use of the camera will start to warm it up, and start chipping away at your recording times.’

The article makes one head-scratching statement: ‘Canon did not design either the EOS R5 or R6 to be professional video tools, nor does it primarily market them as such’. That’s a pretty misleading claim when we look at the marketing materials. And anyways, who else is 8K video (or even 4K) for, other than serious videographers?

The R5 (and R6) may ultimately be forgiven by stills photographers – early reviews rate them highly for stills performance – but filmmakers and videographers are rightfully feeling duped. Cinema 5D reviewer, Johnnie Behiri, wrote about a disastrous experience shooting a short documentary with the R6, which overheated and left the talent awkwardly waiting for it to cool down.

Canon engineers knew this was going to be an issue as far back as October 2019. Last week DCW, still boosting Canon (it makes it’s revenue from camera sales commissions) published an enthusiastic article about the company filing a patent in October for an ‘ingenuous mount adapter’ that cools a sensor. Oh, yeah, they still have Canon’s back.

Usman Dawood, writing for Petapixel, also turned the R5 overheating into an opportunity to bash Sony in a click-baitey article titled, ‘Canon just won mirrorless with the EOS R5 and R6‘.

‘Will overheating ruin these cameras? In short, probably not. One of the reasons why Sony was impacted so heavily by the overheating issue was because it was the customer base that found out about it. Customers bought Sony cameras and then felt cheated afterward because the camera did not perform the way they expected. For Canon, that’s not the case.
Canon is being completely upfront about the potential for overheating and has also provided potential time limits before overheating could occur. This means customers are fully aware of any problems and can either accommodate for it or simply avoid the camera.’

Right. Canon addressed overheating after a chart was published, and has made no efforts to discuss the shortcomings in press materials.

Canon has manufactured a top notch full-frame mirrorless stills camera, there’s no argument against that. And while 8K may well be unprecedented in such a teenie-weenie body, Canon’s marketing department blatantly took advantage of an increasingly unsceptical photo media. Knowing we’re hungry for fresh content that generates clicks, and let’s face it, dependent on the meagre advertising crumbs that fall off the table – Canon strung everyone along for too long. It reeks of corporate hubris, and is looking more and more like a marketing failure. Focus was drawn towards a ‘gee whizz’ feature nobody really asked for, and turned out to be half baked. That ultimately overshadowed features and benefits of real interest to its target market – photographers.

A recall of the R5 – which has to be still on the cards given the furore in the marketplace  – will be a body-blow for the putative market leader. The camera is currently on back-order with no new supply until November.

It’s a fine line writing for specialist media. To a certain extent one needs to support as well as a report on the industry. But there’s always the danger of slipping into a de facto marketing role. Perhaps uncurious, largely untrained photo industry writers as well as Canon come out looking a little threadbare in this saga.