Manfrotto has expanded from its traditional role as a manufacturer of premium camera and lighting supports into the lighting category, with a range of LED lights ‘designed and built for ease of operation and portability’. 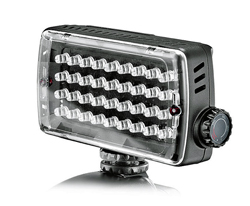 This follows the brand’s move into premium camera bags with its Lino range, launched in Australia last year.

The continuous LED Lights range has been designed for both video and still photography. There are initially three units offered: Pocket (ML120, with 12 LEDS, RRP $70 ), Mini (ML240, with 24 LEDs, RRP $125) and Midi (ML360 , 36 LEDs, RRP $165) that differ in lighting power and battery duration. Each can be mounted with existing Manfrotto supports via threading on the bottom of the mounts. They are light and extremely portable. All three feature a double flash shoe universal attachment and operate on AAA alkaline or rechargeable NiMh batteries.

The units have reduced energy consumption and long lifespan through low heat generation, and are highly shock resistant. They carry a two-year warranty.