January 25, 2011 (Unedited press release): The Imaging & Digital Entertainment Association (IDEA) has finalised its team appointments for the inaugural The Digital Show to be held at the Melbourne Convention and Exhibition Centre May 25 – 27. 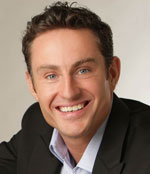 The organisation, formerly known as PICA, restructured in late November to recognise the product convergence issues within the imaging and home entertainment industries. IDEA is managed by a board of the senior management of such famous brands as Canon, Epson, Fujifilm, Hewlett Packard, Nikon, Olympus and Pentax.

Said IDEA president Dave Marshall, ‘Our mission is to grow the industry by increasing consumer awareness of the full benefits of today’s technology. Although as an industry we have been running a successful annual show for more than 20 years ago, we felt the time had come to strike out in new directions to ensure the show acts as a powerful catalyst to boost business for us all.

‘We now have in place the team to help us achieve that goal. This week we appointed Judd Ferguson (pictured above right) as director of Sales and Business Development. Judd has a strong background in business development consulting and he will enable us to service a wider range of exhibitors than in previous years.’

Dave Marshall said that Ferguson would report to Katherine Singson who joined IDEA early last month. Katherine spent the first 15 years of her career in California’s Silicon Valley where she established brands such as Next Computer, Apple and Pixar Animation Studios before moving onto Europe and Australia.

Katherine is a specialist in consumer marketing, public relations and strategic partnerships. Social media consultant Jerrel Dulay has been appointed to handle The Digital Show’s social media campaign and Eve Phillips, formerly manager of PICA, continues that role with the new organisation. The Digital Show team will be lead by industry veteran Paul Curtis in his role as chief executive officer of IDEA.

COMMENT: ‘…where she established brands such as Next Computer, Apple and Pixar Animation Studios.’ REALLY? I thought that was a fellow called Steve Jobs. But I guess if Al Gore can claim he invented the internet…