Boetker-Smith joins the CCP team after the eight years as dean of Studies at Photography Studies College, and nine years as director of the Asia-Pacific Photobook Archive. He was also previously the managing editor of Photofile magazine, and has curated events and exhibitions in the USA, Aotearoa/New Zealand, England, Malaysia, India, Ireland, and Australia.

Boetker-Smith is also a critic and writer for a host of national and international publications – including FOAM, British Journal of Photography, Voices of Photography, Lens Culture, Magnum and GUP Magazine.

‘I’m looking forward to leading this fabulous and important institution, and working with the dedicated Board and staff,’ said Boetker-Smith in the announcement. ‘CCP deserves to be at the centre of Australia’s creative and cultural life, and I’m going to work day and night to get it there. Photography is the medium of our age, and as such the CCP is vitally important in developing and determining what the future looks like.’

The chair of the CCP Board, Patrick Pound, said of Boetker-Smith’s appointment, ‘We are hugely excited to announce Daniel Boetker-Smith as the new Director of CCP. Daniel has a substantial breadth of knowledge and experience along with an impressive record of active engagement with all things photography. We look forward to a dynamic new phase for CCP.’

It’s relatively easy to make crap colour film. To make colour-accurate colour film which delivers a credible two-dimensional facsimile of what the human eye sees is up there in the ‘elaborately transformed manufacturing’ realm alongside the manufacture of computer chips.

Kodak and Fujifilm have the sophisticated equipment and technological prowess to make colour accurate film. It took them about 50 years to actually master the technology.

Latest off-colour cab off the rank is Dubblefilm Cinema, an 800-speed film which delivers ‘epic colours, insane tones at night, halo effect around bright red lights and a bluish tone in daylight’ – all this insane epicness for just $30 a roll! This is roughly what Kodacolor looked like in 1983:

Dubblefilm Cinema is 35mm movie film with the protective remjet layer removed and then respooled as 35mm rolls. Remjet is for anti-halation and anti-static purposes and also offers scratch protection.

Dubblefilm concedes that there might be light leaks in the first two or three frames – but hey, there are another 33 or 34 exposures left. And if you’re using a camera with a DX  reader (film speed and exposure length), you must manually apply an included DX code sticker.

For a deeper dive into the not quite right world of Dubblefilm, click here.

Some camera makers offer their products in a range of colours. But ‘colours’ is such a 20th Century word. So Polaroid has taken a bit of jargon from the fashion industry and (mis)applied it to its Polaroid Go cameras: ‘Colourways!’ 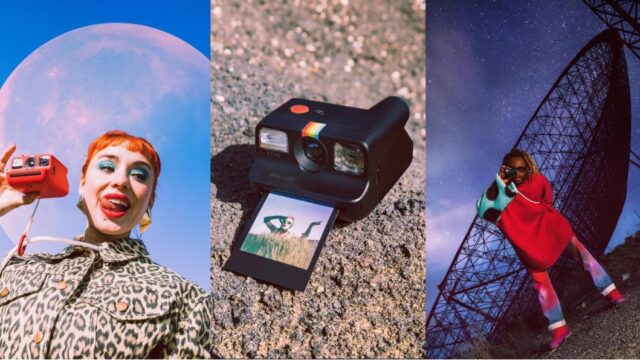 The Polaroid Go is available from this month in the black colourway, and in September it will be joined by a red colourway Polaroid Go. Both will retail for $169.95. Sixteen frames of 66.6mm x 53.9mm Polaroid Go instant film is $36.95. A white colourway version is also available.

But it’s not just the colourways which are new to the Polaroid Go. There are also ‘new creator–centric additions: a filter set for blue, red, or orange–tinted photos, and a matte–black frame instant film for drama that kicks.’

The Polaroid Go is ‘the smallest analog instant camera in  the world.’ It features a selfie mirror, self-timer, ‘dynamic flash’, double exposure, and now the lens filters and black framed instant film.

Australian pet photographer, Jo Howell, has won the Siena 2022 Creative Photo Awards ‘Experimental category’ for her image, Just in Time. The photo shows the ‘evident geometric connotations that enhances the impressive ability of the ants for social interaction’.

The 2022 Creative Photo Awards is one of photo contests ran by the Siena Awards, a festival run in Italy.