Media fact checkers have the monumental new task of verifying online images and videos, with a plethora of misleading or wrongly attributed content being spread about the Russian invasion of Ukraine.

Eastern European nations like Russia and Ukraine have reputations for being havens for cyber crime and spreading online misinformation. And so the conflict hasn’t only manifested with violence on the ground, but also a fierce online battle of misinformation, unverified claims, propaganda and censorship.

Russia has a well-documented history of disseminating lies and censorship to further its agenda. It comes from many sources, whether that’s Russian government officials or  mainstream and fringe media outlets, as well as web brigades sowing seeds of political disorder. And while Russia is credited for having perfected this art of public deception, let’s not pretend the rest of the world, including the West, has clean hands.

But misleading information – such as wrongly attributed images and videos – aren’t necessarily part of some calculated plot by bad actors to manipulate an audience. Social media has cultivated an environment where users feverishly share and consume information without much thought. And when content grows distance from its original source or context and takes on a faux life, the end result is more people are exposed and may spread the inaccurate information.

It’s not the first, and certainly not the last time that well-meaning people are caught up in the fervour of a dramatic global news event and unknowingly share ‘fake news’.

During the 19/20 Australian bushfires, Inside Imaging unearthed a photo in wide circulation on social media that was captured in Tasmania almost a decade beforehand. It showed children taking shelter under a jetty from a bushfire, and seamlessly fit the visual narrative of the 19/20 event, where coastal holiday goers were evacuated to the water’s edge. The image was mostly shared on social media to raise awareness of the tragedy unfolding in Australia and, to the disapproval of the picture’s author, weaponised in memes criticising the Federal Government.

Since the start of March, Reuters has issued more than 40 Fact Check articles on content mostly related to the Ukraine invasion that’s circulating on social media. The likes of Twitter and Facebook then flags content as ‘false information’, citing the news wire agencies as debunking the factual inaccuracies.

Here are just a handful of photos wrongly attributed to the Ukraine conflict. 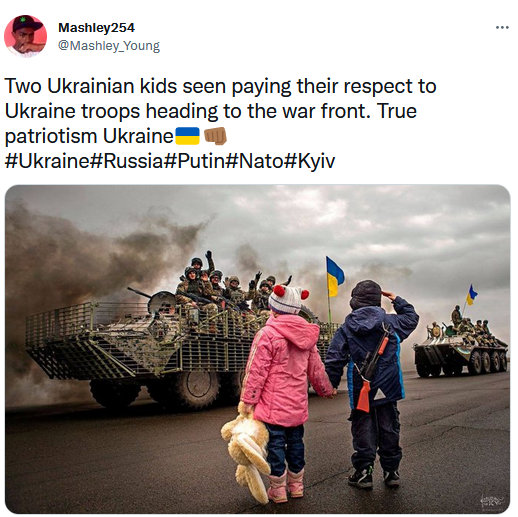 A picture showing two children facing soldiers in Ukrainian tanks, with one saluting and smoke billowing in the background, was posted to Twitter on February 26. The users captioned it with ‘Two Ukrainian kids seen paying their respect to Ukraine troops heading to the war front. True patriotism Ukraine🇺🇦👊’

The photo was ‘Liked’ 8975 times and ‘Retweeted’ 1293 times. It carries the watermark of Ukrainian photographer, Dmitry Muravsky, who shared the picture in a Facebook album, Children Of War, in March 2016.

The now-deleted picture, posted by an Indian couple who are very active but sparsely followed, didn’t pick up much traction with just 1378 Likes and 174 Retweets. The picture was tracked back to Getty Images, and credited to Daily Mirror Gulf Coverage, captured on March 21, 2003.

It’s unclear how this image from almost two decades ago re-surfaced and was re-contexualised, but it seems unlikely it was solely the work of this Indian couple. Could it be some bad players with a dark sense of humour drawing a parallel between the US invasion of Iraq and the Russian invasion of Ukraine? 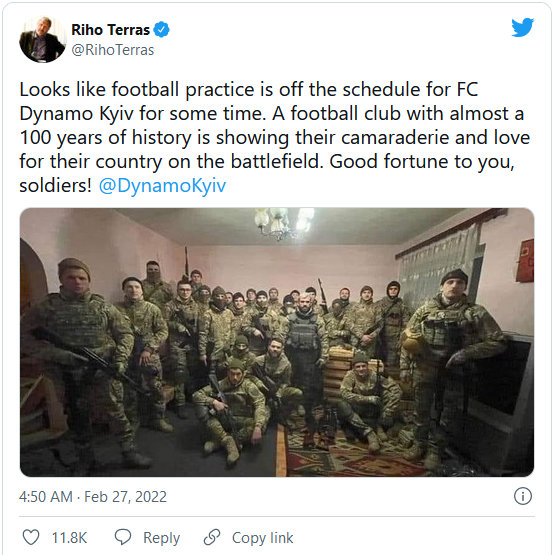 One of the big talking points of the conflict is how the Ukrainian government has armed civilians, resulting in powerful stories about every day people preparing to defend their homes. One photo showing a group of 25 men wearing military gear and brandishing arms went viral, as it allegedly is the Ukrainian soccer team, FC Dynamo Kyiv. But no, this is not the case.

It actually shows members of the Ukrainian nationalist organisation, Gonor, which is nowhere near as moving as the idea of professional soccer players taking up arms. Reuters found one example where a single Facebook post with the caption was shared more than 15,000 times. Even a member of European Parliament, Riho Terras, Estonia’s former chief of defence, shared the image on Twitter with the caption:

‘Looks like football practice is off the schedule for FC Dynamo Kyiv for some time. A football club with almost a 100 years of history is showing their camaraderie and love for their country on the battlefield. Good fortune to you, soldiers!’

Photos showing people injured during conflicts in the Middle East have seeped their way into the current visual narrative coming out of Ukraine. Spanish fact checking agency, Maldita, found an image of a man carrying an injured child away from rubble circulating on Twitter with Spanish captions claiming Russian detonations have injured people, including children. The photo, published in Al Jazeera and The Telegraph on May 16, 2021, is credited to Haitham Imad and is the result of an Israeli air raid in Gaza City.

It shows a ‘Palestinian father evacuating his wounded daughter. Beyond the subjects looking Middle Eastern, they’re also wearing short sleeve t shirts in full sun – hardly attire for the Ukrainian winter. As stated by Maldita, the current circulation is a bunch of ¡Bulo!

AFP found an image [top of article] of a young Syrian child injured with head wounds. It has been circulating with the caption: ‘One of the most heartbreaking images from the Russia/Ukraine war. Putin must end this for humanity’s sake’. The photo was captured on January 3, 2018 by Mohammed Badra and the BBC licensed it via the European Pressphoto Agency (EPA). The caption states: ‘a young girl is treated at a hospital after a bombing in Mesraba, Eastern al-Ghouta, Syria’.

One of the first widely-circulated images to come from the conflict was shot by US photographer, Wolfgang Schwan for Anadolu Agency on February 24, 2022. It shows a woman with bandages on her head, who was injured in a Russian shelling attack on a residential building in Chuhuiv, Ukraine. She was later identified as 53-year-old teacher Olena Kurilo, and was interviewed by AFP about the war. It’s a front page picture, as it shows the ugly truth of how innocent civilians are victims in this invasion.

But claims emerged on social media that this photo was fake or staged. A TikTok user claimed the same woman appears when Googling ‘gas leak injures lady’, from a story occurring in a 2018 event in Russia. This led to trending Google search terms ‘gas leak injures lady 2018 Ukraine’. Reuters found online allegations – conspiracy theories – that Kurilo was a crisis actor.

While a 2018 Russian gas leak explosion did injure a lady, Reuters found no photo evidence from the event shows the woman or anyone who resembles Kurilo. Reuters also found the Russian building bares no resemblance to the one behind Kurilo. The fact the newswire agency is compelled to even research this is a sad state of affairs, but many people are lost down the rabbit hole of these wacky theories and it’s worthwhile setting the record straight.

There are plenty more examples of old photos with misleading captions circulating on social media. Many images appear as memes, which use persuasive or emotional language to elicit certain responses from an audience.

War images play a vital role in documenting events and informing the public. Press photographers strive for their images to be as objective and as close to ‘the truth’ as possible – it’s pretty much the foundation of journalistic ethics.

For the most part, press photo departments do quality work in regards to accurate captioning and context.

But in the age of social networks a barrage of information is constantly being shared and circulated, and this is now where many people get their news. Despite efforts by social media platforms to flag misinformation, inaccurate content will always seeps through the cracks. In the ‘fog of war’ – an uncertainty of situational awareness that happens during conflicts – the spread of misinformation has potential to impact real life events.