Until quite recently, revered British photojournalist, Tim Page, had barely bothered to survey his Vietnam War archive – a collection of photos that caused numerous injuries and close brushes with death.

There could have been a trauma-related motive for Tim to avoid his pictorial memories of war. But it simply boiled down to there not being a damn good enough reason to re-visit the old times.

‘For me, it’s like I’ve been there and done that, and it’s over. Bye bye. No more Vietnam,’ Tim told Inside Imaging.

The maverick photojournalist’s career is the stuff of legend. From a youthful 20-year-old stumbling into the Vietnam War, to tripping his way Gonzo-style through America on the payroll of music magazines, Tim eventually settled for a life in Australia. And at 76-years-old, he’s finally found cause to blow the dust off his archive and immerse himself in his old contact sheets.

‘Ploughing through the archives is a kind-of PTSD in its own right, but it’s nice to simply find stuff you haven’t seen before,’ Tim said.

The photographer is enjoying an idyllic life with his partner, Marianne Harris, on acreage in Bellingen, a beautiful rural bohemian town on the NSW Mid North Coast.

Three years ago, around the time they moved to the countryside, Marianne convinced Tim to finally do something great with his archive: An art book, Nam Contact – a pictorial compendium that would serve as his biggest retrospective of wartime Vietnam. Tim is best known for his colour photography of Vietnam, and this was an opportunity to bring together the unknown or overlooked black-and-white pictures that lay dormant.

Such a monumental project would require assistance. He brought in an expert in photo book design and editing, and a close friend and colleague whose work he had profound respect for, photojournalist Stephen Dupont.

‘When I saw this black-and-white work,’ Stephen told Inside Imaging, ‘it’s way stronger and more artistic in my opinion, and has a real powerful rawness to it.

‘Often photographers aren’t their best editors, and they overlook images. I started to see elements in Tim’s contact sheets that no one had ever seen, and there are these incredibly dramatic images of war. There is a side to his photography that was overlooked, and it’s the first time we’re bringing out this work.’

It was on Stephen’s first major overseas assignment in 1989 that he became aware of Tim’s extraordinary life. He was covering the Vietnamese withdrawal from Cambodia for Playboy Magazine Australia with fellow budding Australian photojournalist, Ben Bohane, who brought along a battered copy of Tim’s autobiography, Page After Page.

For two wet-behind-the-ears photojournalists heading off to SE Asia to cover the end of a conflict that has direct lineage to the war captured by Tim, the book was an enlightening read. Stephen later read Dispatches by Michael Herr, a famous, quasi-journalistic account of the Vietnam War which paints Tim as a tripped-out oddball photojournalist tokin’ his way though the conflict alongside other hedonistic crazies. This stranger-than-fiction character would go on to inspire Dennis Hopper’s character in Francis Ford Coppola’s epic war film, Apocalypse Now.

‘He was a big inspiration for me, especially connecting to this young guy heading out to cover the war. At that time, I had similar ambitions and felt a connection with Tim. Then I was lucky enough to meet him, and we became friends instantly and have become very close.’

The pair spent weekends in Bellingen whittling down the hundreds of Vietnam contact sheets using a fairly ‘primitive’ process – a light table and magnify glass. Most of the materials are originals from the 1960s, and made a few ’round the world trips before ending up in rural NSW, leaving them in a less-than-perfect state.

For many photographers it would be tempting to seamlessly fix these defects with a bit of digital post-processing magic. Vintage prints – whether they’re overexposed, discoloured, scratched or marked – can be doctored into a flawless creation.

But Vietnam was a raw and uncensored conflict, and the pair wanted this ethos to carry on in Nam Contact. It was decided to display the images ‘warts and all’. Stephen also noticed the contact sheets held a narrative. By having the exposures appear side-by-side, they create a natural storyboard. Even the messy chinagraph scribbles provides insight into Tim’s thoughts.

‘Everything looks like it did in its original state,’ Stephen said. ‘If it’s a badly printed photograph, it stays that way. If it’s a little under or over exposed, we kept it to its true authenticity. We didn’t want to glamorise it.’

Nam Contact appears like a rough diary or scrapbook, almost as if it were buried by Tim somewhere in the jungle and discovered decades later in mint condition. Tim describes this design as having a ‘Peter Beard influence’, however the pair were more inspired by Gilles Peress’ remarkable photo book, Telex Iran.

After whittling down the archive, Stephen returned to his studio on the NSW South Coast and went into overdrive. He spent days on end immersed in Tim’s Vietnam, to the point where he felt as if he were in the jungle with him.

‘I can start to smell and visualise everything in such a raw and real way, as if Tim has taken me along for a ride,’ he said. ‘It’s as close as you can ever get when you haven’t had that actual experience. It was a real honour, and an incredible experience for me to go through.’

Stephen felt a heavy responsibility to ensure Nam Contact honoured Tim’s vision and personality. ‘At the heart of my intention was to highlight what an incredible photographer, and what an amazing human being, this guy is,’ he said. And in doing so, the book pays the utmost respect to the people of Vietnam, the soldiers, and other subjects.

It’s printed by Momento Pro in an extremely limited run of nine copies, with most already accounted for by private collectors. The 448-page book weighs over 7kgs, and comes in a case that’s a reproduction of a 1966 Kodak flexographic box, along with a vintage photography loupe.

‘It was an honour to work on such an historically significant project like this, and to collaborate with photography legends like Tim and Stephen,’ Momento Pro product manager, Geoff Hunt, told Inside Imaging. ‘They were after a custom format so Stephen and I worked closely together to choose materials that did Tim’s archive justice, and the result was a unique package including an oversized book, a handmade box with an insert for the loupe, and an embossed print case for holding a photo print.’

Tim said Stephen really brought his top game to the table, and was almost more enthused than he was to create Nam Contact.

‘The way Stephen’s done it is so unique. There might be big blobs of pictures, a dense piece of writing, followed by a blank page or a letter or something,’ Tim said. ‘It forces you to read what’s there, then jumps into a section of pictures. The chinagraph on every few pages gives some colour to the black-and-white that lifts you a little bit, even if it’s a scruffy line around a picture. Some pictures are drained, others are bled right out on the double truck.

‘After looking at it a few times, there is a rhythm like as if you’re at a concert. It’s a complete symphony. It blows me away. It’s my twelfth book, and I’ve worked with some of the best designers on the planet. This is just an all-Australian madness.’

Along with the hundreds of black-and-white images, full original contact sheets, and other ephemera such as letters and diaries, Tim wrote numerous passages to complement the pictures.

‘It was a real cathartic experience – a really good way of dealing with the PTSD,’ Tim said. ‘Totally cathartic. Writing the text, some of them I’d do two or three short ones in a day. A couple of the longer texts, I might have been wounded or it was a bad day, would take me days to write.’

Some of Stephen’s picture editing choices surprised the veteran photographer, but the left-field calls are why Tim brought him in. The mission was, after all, to unearth the overlooked and forgotten, but strong, pictures. Back in the day if a photograph was soft or slightly out of focus, it was tossed aside. ‘The style of images regarding what is acceptable and printable has changed a lot since the 1960s,’ Tim noted, and Stephen was drawn to many ‘imperfect’ images.

Tim highlights a double-page spread in the opening section of Nam Contact that shows a group of Rhade minority jungle mercenaries lined up after an attack on their camp.

‘These mountain tribe [Rhade minority] mercenaries. They’re all terrified with blank looks. The picture is really soft, and it’s a copy of a wire photo. I would’ve probably not gone with it, but looking at it again it’s a “wowie” picture. Stephen has this way of picking the obtuse or weird, and then it’ll go on to be admired and win awards.’

As for Stephen’s favourite picture in the book, it’s a hard call but one image stood out to him showing Australian soldiers walking through long jungle grass at dawn.

‘There are all these Hueys (helicopters) flying over the top of them. The picture is slightly soft, it’s got a low aperture. It’s not action-packed – it’s pretty. A beautiful photograph, that’s more like a painting.’

Producing a trade copy of Nam Contact is the next step. The team is carefully considering how to tackle this challenge, given the nine copies and additional artist proofs printed by Momento Pro are such superb quality.

‘The blacks are just so black – it’s so graphic,’ Tim said. ‘You can’t really reduce the paper or ink quality and make it look that dramatic. I’m not quite sure how you scale that down to a trade version. Momento Pro has done an awesome job. Expensive, but awesome.’

As they say, ‘you get what you pay for’, and the team believes this will go on to be one of the great photographic documentations of the Vietnam war.

Nam Contact will be Tim’s last hoorah with this era of his life. It follows him from 1964 until 1969, when he was almost killed and left for America with serious injuries. The pair have already started on the next book, American Whiplash, which follows the photojournalist’s life through the 1970s. This era could be described as a wild hedonistic LSD-fuelled Gonzo road trip around the USA. Subjects and destinations include Hunter S. Thompson, The Doors, hippies, veterans, Woodstock, and San Francisco. Stay tuned! 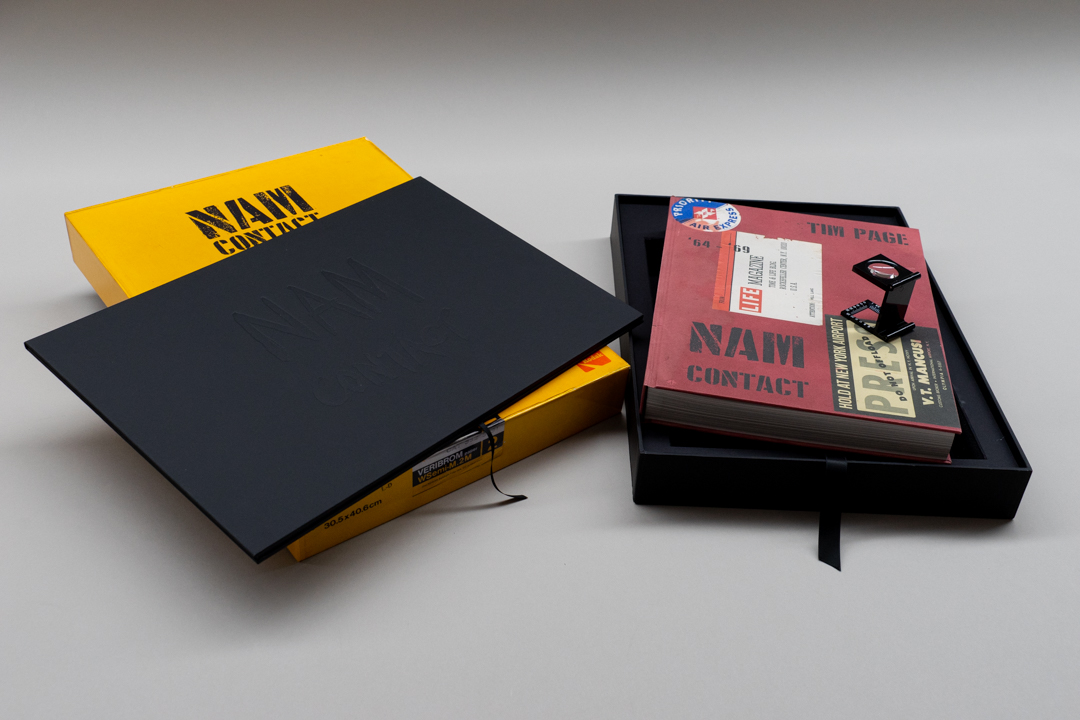