Australian photojournalist, Andrew Quilty, has won two awards at the Walkley 2021 Mid-Year Celebration of Journalism for feature articles and a podcast covering the war in Afghanistan. 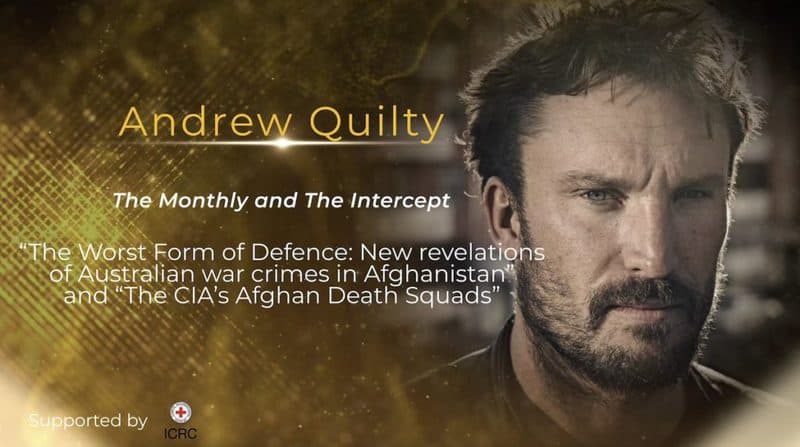 Quilty has lived in Afghanistan since 2013 and remained there throughout the pandemic. And while Western newsrooms have intensely shifted focus to Covid-related stories, bumping affairs in the Middle East back a few spots, Quilty has continued to dedicate his career to the region.

This commitment has won him the June Andrews Award for Freelance Journalist of the Year for a podcast and two essays – one published in Australian magazine, The Monthly, and another in US publication, The Intercept. The two essays also won Quilty the Humanitarian Storytelling Award.

Although Quilty is best-known for his award-winning photography, he’s proven to be a capable writer who combines both skillsets to publish in-depth investigative stories. The Intercept essay, for example, masterfully adapts both mediums to tell the story, but it’s his writing doing more talking than the photos.

It’s a similar formula to that which earned him the prestigious 2015 Gold Walkley for The Man On The Operating Table. That story uncovered the unknown identity of a man killed during an US attack that destroyed a Médecins Sans Frontières hospital in Afghanistan.

The pivot into journalism has been partly forced on Quilty, whose photojournalism career was unjustly smashed in 2019 by the World Press Photo Foundation (WPP) after it publicly ‘disinvited’ him to its awards ceremony over allegations of inappropriate behaviour. Not only did the WPP refuse to publish the details of the allegation, but Quilty wasn’t informed, of the reasons behind the decision, or asked to verify any information. Quilty’s regular clients, fearing the ramifications of being associated with someone set to be ‘cancelled’, chose to no longer work with the photographer.

Despite proving his worth as a photojournalist by covering important events and winning numerous awards, two years later the photography jobs still aren’t showing up. So Quilty has now, by necessity, branched out into writing to continue reporting from Afghanistan.

The Intercept article, The CIA’s Afghan Death Squads, was published in December, 2020 and covers how there are US-backed militias which violently serve a US agenda, and will remain there long after American troops pull out of the region.

Lastly, Quilty was awarded for his podcast, Afghanistan After America, launched in the second half of 2020. It features nine episodes, with each including a guest expert who discusses what has, and may, happen in the region.

‘Covid brought disruption and uncertainty to journalists and newsrooms just as it did to all Australians, and people around the world. But for all those challenges, the winners we celebrate tonight show how Australians can rely on our journalists for ethical, impactful reporting that informs, educates and serves,’ said Walkley Foundation chief executive, Louisa Graham. ‘With common threads of exposing abuse of power, inequality and disadvantage, these winning stories reflect the defining issues that we’re facing as a nation.’