Head On an online triumph

Rather than forget about the whole thing, organisers of Sydney’s Head On Photo Festival have pioneered in presenting a brilliant international arts event during a worldwide pandemic and shut-down.

Rather than cancel or postpone Head On 2020, the team at Australia’s cherished annual celebration of photography shifted the entire event online in just two months. It’s the first photo festival to ever go fully digital.

The new format is simple. The 100+ exhibitions appear in online galleries, and the participating photographers and industry leaders run their artist talks and workshops through Live Webinar, an advanced online video conferencing solution rivalling Zoom. Live Webinar allows hosts to share content on screen, whether that’s a slideshow of images, video, or another visual presentation. There is also a chat box, where attendees can ask questions, or comment among themselves.

AS we’ve noted in earlier years, artist talks are one of the elements that make Head On great. It provides a platform for international and local photographers to engage with an engaged audience. Head On organisers go to great lengths to include as many participating photographers as possible. In a normal year flights from Europe, North and South America, the Middle East and Africa, and across Australia bring numerous photographers to Sydney to exchange ideas with a local audience.

So this online format presents Head On with new opportunities. First, more participating photographers are hosting events, since no long-haul flights or assignments stand in the way.  Second, the talks have a global reach, rather than just benefitting those who visit Sydney in May. Third, the event is spread out nicely over the full two weeks, rather than jamming as much as possible over the opening weekend when most visitors attend. Lastly, since it’s online attendees don’t need to scramble between galleries and venues to attend events.

Global reach
Head On organisers informed Inside Imaging the events have clocked over 40,000 ‘attendees’ from 125 countries, proving the new format (the new normal!?) is a success. Australian journalist and Head On regular, Alison Stieven-Taylor, hosted two events this year and remarked in the panel discussion, Australian Photojournalism, there were 155 attendees tuning in to hear from the likes of Brian Cassey, Jessica Hromas, Tracey Nearmy, Meredith O’Shea, Ben Bohane, and Moshe Rosenzveig. ‘Can’t imagine that would have happened in the real world,’ she wrote in her weekly newsletter, Photojournalism Now.

There are clear weaknesses to running an event online, but in these weaknesses are strengths. For instance, streaming an artist talk isn’t going to be as social or interactive as a live, in-person event. However, providing attendees a cloak of anonymity led to noticeably more discussion, particularly in the Q&A sessions following the talks. An audience at an in-person Q&A session can sometimes feel restrained – for certain individuals briefly grabbing the spotlight from a presenter can be a daunting task. Even the confident types may be challenged to ask a difficult question, which consequentially may be the most interesting. Online, this ain’t the case.

Cairns-based photojournalist, Brian Cassey, was hammered with questions about his series – Me Too! Where the boys are, the girls are. The photos show scantily clad male ‘performers’ dancing erotically with willing female participants, who were also happy to strip down. Over 20 queries asked about the general background, how the subjects responded to the photos during and afterward, technical aspects, and a few harder questions were respectfully lobbed at Brian regarding whether the political incorrectness of the project upset anyone.

Attending Head On from home 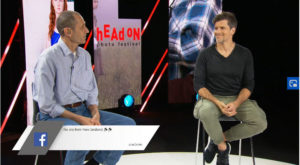 On Friday night, May 1, the festival launched via an online stream from a high-production TV studio, replacing the usual launch party at the UNSW Art & Design campus in Paddington. Host, Osher Günsberg, the TV presenter formerly known as Andrew G, was the evening’s charismatic Master of Ceremonies, alongside Head On founder, Moshe Rosenzveig (pictured right) They unveiled the winners of the Student, Landscape, and Portrait prize, and crossed over live to each of the winners, who accepted the award and provided background to the photos.

The next morning, American award-winning photojournalist, Paula Bronstein, gave Head On’s first live streamed artist talk, on her exhibition, Elderly Lives Frozen by War: Ukraine’s War. She was joined in the stream with her fixer and translator, Oleksandra Hrybenko, who lives in Denmark where it was 4am.

Paula and Oleksandra’s talk went for almost an hour. They spoke in-depth about how the conflict in Eastern Ukraine with pro-Russian separatists has left thousands of elderly people vulnerable. Paula heaped praise on Oleksandra regarding the pivotal role she played, highlighting how critical a professional fixer is to a foreign photojournalist.

The conflict began in 2014, and worldwide attention peaked when a passenger plane, Malaysia flight MH17, was shot down in July, 2014 by pro-Russian separatists. Interest in the region then waned, yet the conflict continues and today the death toll stands above 13,000. Peace negotiations are currently ongoing, yet Oleksandra explained the area remains extremely volatile.

‘The young people left the front line villages, because it’s very dangerous,’ Oleksandra said in the artist talk. ‘There is occasional shelling from mortars and rocket launches. Only the elderly are left, because they have nothing to lose but their houses. Maria [a subject in Paula’s series] lives 200m from trenches and tanks. Every day she can hear it.’

Immense suffering appears throughout the series – many subjects are alone, vulnerable, and dealing with physical and mental illnesses – but they also show resilience and hope. Their struggle is a demonstration of a strength stereotypically ascribed to hardy eastern Europeans – they would prefer to die in the freezing winter or from shelling, than submit to fear brought upon by war. In a time when the mortality of the elderly is of great concern to society, the series shows that everyone has a fighting resilience in them.

Straight after viewing Paula’s images and hearing the talk, Inside Imaging jumped over to Watch and Act, a collection of images curated by the Walkley Foundation captured during the 19/20 Australian bushfires. A photo by Tracey Nearmy shows an exhausted and defiant elderly woman, Nancy, standing outside her Nowra home as a bushfire moved toward them. Like the Eastern Ukrainians, Nancy refused to leave her home despite an imminent threat. There was a haunting similarity between Nancy and the subjects in Paula’s series. 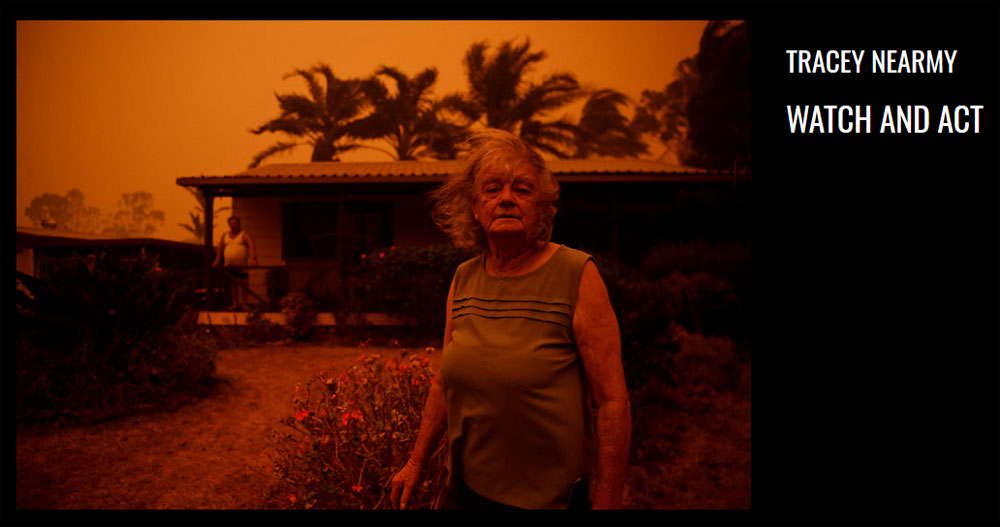 The next artist talk was a pre-recorded video with Marrickville street photographer, Emmanuel Angelicas, and legendary Australian curator, Alan Davies, who handpicked the black-and-white images in Silent Agreements Marrickville 50.

In the talk, Emmanuel listed 50 words that have been used to describe his images. A few include cultural, menacing, pornographic, romantic, shocking, bold, dark, desired, confronting, graphic, collected, composed, real, unreal, sadistic, bullshit, portraiture, disturbing, clever, sexist, iconic, political, global and Australian. Alan Davies did a nice job to have the series cover just about all those descriptive words.

That afternoon, Professor Richard Sawdon-Smith took to the floor, so in anticipation we checked out his project, The Unknowing… X.

The well-hung homosexual university professor and self-portrait photographer is, well, exhibiting himself in a theatrical manner. Richard views his photos through an academic lens – an exploration of his various identities – while maintaining a playful demeanour by dressing up. It was not my cuppa tea. Perhaps a Freudian psychoanalyst will suggest this is somehow related to the confronting male nudity or overarching themes of sexuality. But my superego, ego, and ID insist it’s due to something else – the repetitiveness of the self-portraits, perhaps?

Montreal-based documentary photographer, Pierre Dalpé, also explores issues of gender identity and sexuality in Wigstock, a series captured in the early ’90s of an outdoor drag festival in New York City. Dalpé explained he is quite shy, and so he’s been drawing to photographing performers, including drag actors, as he admires their courage and ‘lives vicariously’ through them.

Dalpé provided quality advice to any budding portrait photographer regarding how to establish trust to capture authentic moments. This response was in reference to his series of performers getting ready.

‘Ideally, I will arrive earlier when the performers are not in that last minute rush. So I talk to them, bring samples of my work as they’re slowly getting ready. That’s a situation where I’m establishing a relationship with the people – talking to them, gaining their trust. That will usually allow me to, at a certain point, simply disappear into the background. Even though I’m really close, they won’t mind me being there’.

Dalpé’s artist talk, which included a video of his portfolio, was a highlight.

Photojournalism and documentary photography has the greatest presence of any genre at Head On, but rest assured there is something for everyone – from HDR landscapes through to fine art.

During a panel discussion titled Australian Photojournalism, Head On founder, Moshe Rosenzveig, made the following statement:
‘Photojournalism is so underrated right now. It’s becoming less important in the eyes of publishers, and even in the eyes of the audience. I think this is wrong, and also something that needs to be changed. People who produce the images, in a way they write the history. Besides the Walkleys, we don’t really have something that quite celebrates this.’

This was said in reference to a discussion about Paper Tigers, a collection of great Australian news photos curated by Head On. But Moshe was being modest about there not being anything other than the Walkleys. Head On most certainly celebrates photojournalism and the people who produce the images, on both a local and international scale.

With Head On firmly established as a permanent fixture in the arts calendar – rain, hail, shine, lack of rich benefactors or global pandemic – the organising team’s resilience in not only continuing to overcome challenges, but produce an outstanding festival every year, deserves our gratitude and applause.