90 not out for Snapshot!

Established by the Bell brothers in 1928 the business was sold 18 years later to Maurice Boswell who gave it the name ‘Snapshot’. When he retired in 1992 due to ill-health Graham and Jill Boswell took over the business and took it into the digital age.

The 90-year milestone was celebrated at a VIP function on April 13 and the highlight was the unveiling of a new installation to celebrate both the history of the business as well as cameras.

For nearly 50 years Graham has been collecting cameras and always had a dream of opening a camera museum in Hamilton. This was at the back of his mind when looking for new premises in 2015, but never came to fruition. When planning began in earnest for the 90th celebrations three months ago, son Sam suggested creating a museum wall by installing a 2-metre high shallow glass cabinet to fill the entire side wall of the studio/classroom.

With the custom-built cabinet installed, Graham started sorting through his camera collection and was surprised by how many it took to fill all the shelves – four trips into the storage shed later and the display was deemed complete enough for it’s unveiling. Pride of place is a floor-to-ceiling collection of Kodak cameras spanning a period of 110 years.

At the same time a massive montage of Snapshot photos was created, printed and installed on the opposing wall. All this was done behind closed doors and hidden beneath large cloths during the day to hide it from visitors. The installation was revealed at the VIP function following speeches by two dignitaries who also cut the ribbon. These were former mayor Margaret Evans (who served on council with Maurice Boswell many years ago) and MP Tim Macindoe. Both have since written some kind words about the evening.

Margaret noted that, ’90 years in retail is a significant achievement, especially in the city of Hamilton which had a small population in 1928 when the Bell brothers opened their photographic business – a year before the Wall St crash and Great Depression which also can’t have made things easy in the early days. It was a pleasure to cut the ribbon to open Snapshot’s fascinating on-site Museum of Photography. What an amazing industry of change and innovation it is. Congratulations to Graham, Jill and all the Snapshot team for embracing those changes and constantly adapting to them.’

Opposition MP Tim Macindoe said: ‘Snapshot are celebrating their 90th birthday this month – and surely must be among the oldest surviving family businesses in the city and an inspiration for their survival through the turbulent times of technology change. They have developed a “cave museum” at the shop to celebrate and that’s worth a peek for the equipment displays plus the historic photographs.’

A customer of Snapshot who shoots commercial videos was asked if he could capture a few videos on the night. He took the request very seriously and using commercial gear broadcast his first ‘Live Facebook Feed’ of the speeches. At the other end of the scale ‘Very Old Movies’ were played in the museum and projected onto the white studio backdrop.

Using the same collection of photos used for the wall montage, Snapshot created a 15min slide show for playing on TVs around the store. The photos were also laid out on a film strip in a photo editor for printing edible images for a three-tier cake that was cut by the oldest and youngest guests – a 90-year-old old past employee, Arthur Beale, and Cooper Mellow, 7-year-old son of current employee, Dion Mellow. 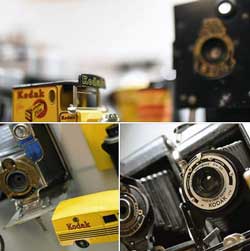 The following day was for the customers – experts from four camera brands were in-store and Snapshot staff wore Kodak-themed T-shirts to acknowledge the brand that played such a big part in Snapshot’s history.

The room the museum is in will still function as a studio and classroom but if people get distracted by the camera collection the large fabric back-drop used to keep it under wraps during the installation can be put back up. The Museum is open to the public at no charge during store opening hours but will be closed during camera classes or when the studio is booked.