Snapshot adds coffee to the mix

Jill and Graham Boswell, along with son Sam, combined the opening of their new Snapshot store in Hamilton, NZ, last month, with the IPI ‘Global Open House’ project, and featured in an interactive webinar broadcast to IPI members highlighting retailers who had successfully met their ‘100-Day Challenge’.

The IPI 100-Day Challenge/Global Open House initiative was set up to encourage IPI members to actually follow through on ‘best intentions’ following attendance at the IPI conference. While retailers will often return home from a conference full of new ideas, the daily pressure of working ‘in the business’ can see implementation of those ideas put aside indefinitely.

This is how it works: IPI members make a commitment to a specific improvement in their business – a store refit, offering a greater range of in-house services, becoming more smartphone friendly, etc – to be achieved over the 100 days following the conference. The related ‘Global Open House’ is a platform for retailers to then present the results of their improvement project to customers.

‘It’s a springboard for your annual selling season, highlighting new products and services or changes to the business,’ Brenda DiVincenzo, IPI’s director, Member Success,explained at the start of the webinar. 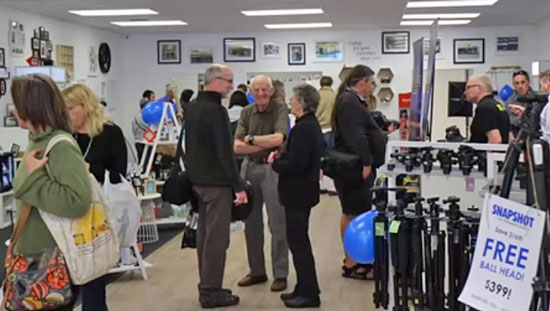 IPI members were provided with a step-by-step ‘how to’ toolkit comprising suggestions for an in-store event and associated marketing collateral. At the time of the webinar, around 90 IPI retailers had downloaded the Open House toolkit.

Given the Boswell’s plans to move to new premises were well under way at the time of this years IPI conference, Jill Boswell said she thought it might be a ‘bit cheeky’ to call that their 100-Day Challenge, so they decided to focus down on making the Snapshot store more smartphone-friendly.

Jill showed shots of the old store – which was heavily hardware focussed and a bit tight for space – and contrasted that with the more open, bright and airy new store, in which kiosks and framing balanced out a still-strong hardware section. In fact, new hardware in the form of telescopes (‘nobody else in Hamilton sells telescopes’) has been added to the mix. 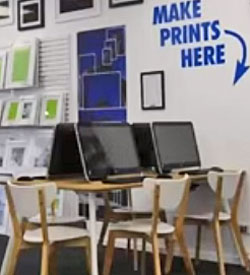 Conventional shelving has been replaced by more eye-catching display options, such as A-frame units and even a coat stand used to hang camera bags. Graham and Jill’s son Sam played the major role as designer for the new store.

The HP kiosk system from the old store was replaced by new space-saving slimline touchscreen kiosks positioned on a dining table, for a friendly, more casual ambience.

‘People miss it because they are so used to the big chunky kiosks,’ Jill observed. So there’s a large MAKE PRINTS HERE sign on the wall to help customers identify the kiosk area.

The new Snapshot also has a portrait studio which doubles as a small lecture theatre, and there are plans for lunchtime seminars.

But the real innovation is the addition of a ‘semi-detached’ coffee shop. The idea is that people often go for a coffee while their print order is being processed, and people dropping in for a coffee will be encouraged to order prints.

‘A lot of people when they are waiting for their prints used to go and get a coffee so we thought we would put coffee in,’ explained Jill.

In the morning the coffee shop can be opened before the photo store.

‘We are trying to get the coffee person to help people print off their phones,’ Jill explained.

There are no kiosks in the coffee shop. With Dakis software they can order direct from their phones. If they go to the Snapshot website the mobile version of the hardware is front and centre. There’s no need to download an app.

The plan is that office workers (Snapshot is in Hamilton’s CBD) order up photo products while they are having their morning coffee and then go to work and pick up their order later.

For the Snapshot Grand Opening event (the Boswell’s ‘Global Open Forum’) local radio was used to promote the event, and had a presence on-site on the day.

‘Radio was designed to target people who didn’t ordinarily shop with us and young families and I went all out with Facebook and newsletters targeting our regular customers. So it became a real meeting on the day of people coming to have a look at the new store.’

Jill said that social media played a bigger role in getting people along that the investment in radio advertising.

Activities on Grand Opening Day included face-painting, a popcorn stand, the offer of free family portraits and lucky draws. Canon and Nikon reps were there to demonstrate their respective ranges and answer questions.