A recent report by Infotrends confirms that the market for digital cameras has matured so that now more than ever, camera owners are more vitally engaged with photography.

While that might appear to be a version of the bleeding obvious, there has been a significant change since digital cameras emerged as a new category of consumer goods: In 2010, half of (US) camera owners actually didn’t really care that much for photography, falling into the ‘Rarely Take Photos’ and ‘Casual’ photographer categories. By 2017 this has fallen to just 27 percent, with the clear majority of camera owners now defining themselves as being in the more engaged ‘Advanced Hobbyist’, ‘Hobbyist’ and ‘Memory Keeper’ categories. 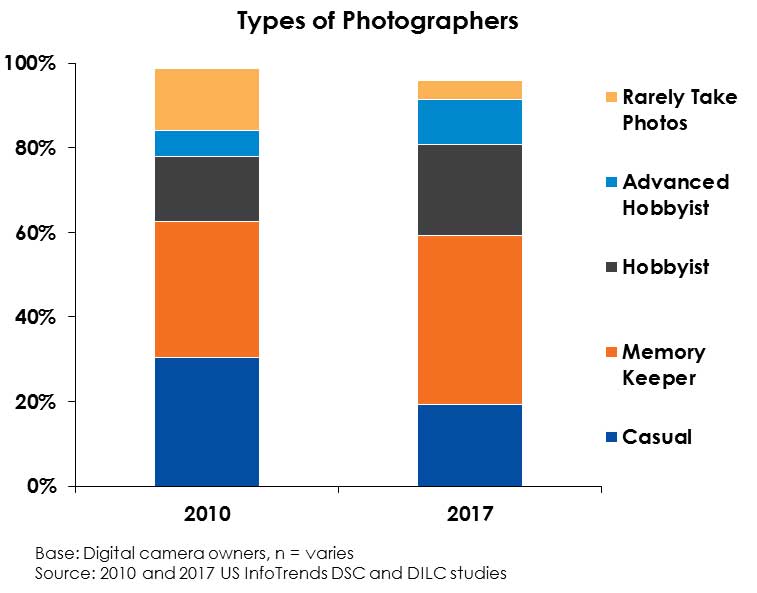 ‘Between 2010 and 2017, there was a dramatic decline in the percentage of camera owners who consider themselves casual photographers,’ wrote InfoTrends analyst Ed Lee. ‘InfoTrends believes that these casual photographers have migrated from using a digital camera to a smartphone. Likewise, people who rarely take photos have likely switched over to smartphones, and perhaps have even retired their digital cameras.’

‘In 2013, mobile phones surpassed digital cameras as the camera used most often and the gap continues to widen each year.’

In the analog era casual photographers may have owned an inexpensive compact camera and used a roll of film or less a year. They were still significant to photo retailing because there were a lot of them and they purchased cameras and D&P. Today they purchase their cameras from phones shops and are yet to print photographs in large numbers.

Ed Lee said the self-defining group of camera owners with a strong interest in photography want high quality photos and that ‘InfoTrends expects that memory keepers, hobbyists, and advanced hobbyists will continue to account for the bulk of camera owners. While nearly everyone will also own a smartphone, they will still turn to their cameras for most of their photos.’

And if you have a ‘fish where the fish are’ approach to retailing, it’s worth noting that, according to the report, teenagers tend to see themselves as casual photographers or someone who rarely takes photos.
– Keith Shipton