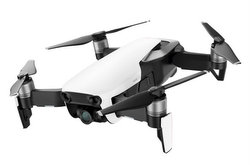 The Mavic Air weighs 430 grams, 41 percent lighter than the Mavic, and when folded can fit in the palm of a hand – making it the most portable DJI drone.

It has a three-axis mechanical gimbal, suspended from vibration reducing dampeners. The camera has a 1/2.3 inch CMOS sensor and 24mm f.28 lens that captures 12-megapixel stills, including RAW, and 4K video at 30fps with a maximum bitrate of 100Mbps.

The camera has a new HDR algorithm that preserves more highlights in low light. Another camera setting is Sphere Panorama, previously used in the DJI Spark, which automatically shoots and stitches 25 photos to create a 32-megapixel sphere ‘miniature-world’ panoramic image.

There’s 8GB of onboard storage, plus an additional microSD card slot.

In Sport Mode the drone can fly up to 68kph, a dangerous 5000m above sea level and 4km from the operator.

The battery life lasts up to 21 minutes, which is less than the Mavic Pro’s 27 minute battery life, but more than the Spark’s 16 minutes.

Seven onboard cameras and infared sensors, along with optimised algorithms called FlightAutonomy 2.0, construct a 3D map of the environment to assist with the precise hovering and flight performance. A feature called ActiveTrack can simultaneously sense 16 objects, and follow specific targets.

Dual forward and back cameras sense objects from up to 20 metres away, and prevent the drone from being flown into them. 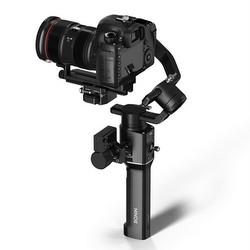 DJI’s three-axis gimbal has been designed to work with a range of mirrorless models, such as the Sony Alpha and Panasonic GH cameras, along with chunkier DSLRs like the Canon 5D Mk IV.

The Ronin-S uses torque motors that support most popular camera and lens combinations, and the stabilisation system compensates for high magnification ratios with zoom lenses.

The handheld stabiliser has a number of modes to suit a range of shooting requirements.

Push mode allows an operator to adjust the pan and tilt axis, and Sport mode allows fast movements. Other modes include Panorama, Hyperlapse, Track, and CamAnchor.

It has buttons to start and stop recording/shutter release, and a joystick to change the camera position.

The battery can be hot swapped during shoots, to provide extra battery life. 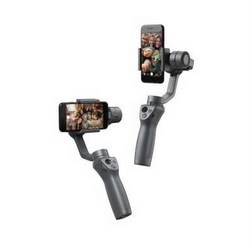 Osmo Mobile 2
The handheld Osmo Mobile 2 stabiliser has been designed to transform smartphones into steadycams, using the three-axis gimbal to cancel movement from three directions.

The lightweight and portable stabiliser has a two-way mobile clamp to let users switch between portrait and landscape orientation.

Controls on the device can set ISO, shutter speed, and more, allowing a smartphone to work more like a DSLR.

Unlike the Osmo, the updated stabiliser has an in-built battery with up to 15 hours of filming life. It also uses a spring loaded mount rather than a screw mechanism to grip a phone.

But possibly the most notable update is the Osmo Mobile 2 price. The press release has it listed at US$129, which Dpreview notes is significantly less than the US$299 price point of the Osmo when it debuted.