Mavic Pro’s Australian retail price will be $1699 including a 4K camera and controller, with a kit version including extra batteries, extra propellers, a charging hub, an adapter, a car charger and a shoulder bag, for $2199.

It will begin shipping in late October/early November and will be stocked in Apple stores.

DJI says the Mavic Pro is ‘small enough to toss in a bag and easy enough to launch quickly whenever the time and place are right’. It’s compact folding design (pictured right) compresses the entire drone to not much larger than a water bottle.

Unlike the camera-less Karma, it is equipped with a stabilised 4K camera and a visual navigation system, with a 7km range and 27 minute flight time.

It can be operated by the remote control unit or at a shorter range by a smartphone. DJI says set-up is less than a minute

FlightAutonomy, the Mavic Pro’s control system, is a network of hardware and software consisting of five cameras, GPS and GLONASS navigation systems, a pair of ultrasonic range finders, redundant sensors and 24 powerful computing cores is the control

It can position, navigate and plan routes for Mavic Pro, enabling it to avoid obstacles in various environments, with or without the help of satellite signals.

DJI claims FlightAutonomy provides a significant boost in working range and can cope with complex 3D environments. The Mavic Pto is ‘self-navigational in various intelligent flight modes, and will avoid most obstacles at speeds up to 36 kph.’

Flight time of up to 27 minutes is a considerable advantage over the Karma’s 18 minutes. In Sport Mode, is can achieve speeds of up to 64 kph, and it can handle wind speeds of up to 38.5 kph. DJI’s GEO geofencing system helps identify restricted areas, preventing flight in locations that might raise safety or security concerns automatically.

It is set to automatically return to its launch location if it ever loses contact with the controller or reaches critically low battery levels. A new Precision Landing feature records a burst of video with two stereo cameras every time Mavic Pro launches, then uses both video and satellite information when it returns to land within an inch of where it took off. If a pilot lets go of the controls, the drone will simply hover in place.

It is equipped with DJI’s smallest-ever three-axis gimbal for stabilised photos and video. The autofocus camera features a minimum focusing distance of just 50cm, and can be flipped 90 degrees to portrait mode for vertical selfies and video. Mavic Pro records 4K video at 30fps and full 1080p HD at 96fps. It has a 12-megapixel camera with Adobe DNG RAW support. DJI says the gimbal will deliver usable 2-second exposures. 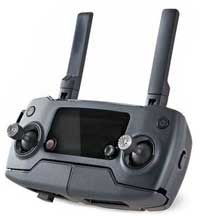 The remote controller (pictured right) has a built-in LCD screen which displays essential telemetry data, with buttons for functions such as Return-to-Home and pausing during Intelligent Flight mode. The video link system, OcuSync, supports a range up to 7km and live view resolutions up to 1080p.

Its dual-band WiFi allows easy control via smartphone for close range operation or for quick downloading of content from Mavic Pro straight to a device.

In Gesture mode, gestures will enable Mavic Pro locate the operator, center them in the frame and take a posed shot. The Mavic pro has live streaming to Facebook Live, Periscope and YouTube through the DJI GO app.

An updated version of DJI’s ActiveTrack recognizes common subjects such as people, bicyclists, cars, boats and animals, which then sends Mavic Pro to follow behind, lead in front, circle above or track alongside the subject, keeping the camera focused while the operator concentrates on flight maneuvers. Terrain Follow allows the Mavic Pro to race up a slope behind a subject while remaining at a constant height between 30cm) and 10m.

At the other extreme, the new Tripod Mode is designed for indoor use, slowing and fine-tuning Mavic Pro’s position and angle based on controller movement inputs to allowing for precision framing and safe indoor flight.

DJI Goggles
Mavic Pro also pairs with DJI Goggles, displaying an 85-degree view from the drone in full 1080p for a bird’s-eye view of the world below. With built-in OcuSync, the goggles receive video directly from Mavic Pro in the air and not through the controller, reducing lag to a minimum – and allowing sharing of in-flight views with a friend.