The following article on Robert Hayson and Christine Murphy, formerly of Fletchers Fotographics Bega, was written – with obvious respect and affection – by Ian Campbell, and is re-published with permission. It originally appeared in community news website AboutRegional.com.au: 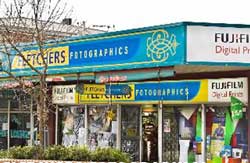 Many will find it hard to imagine Bega’s Fletchers Fotographics without Robert Hayson and Christine Murphy inside. With the business now in new hands it is only a matter of days before that becomes a reality.

The sale opens new opportunities for the pair, some of which may or may not surprise, and also offers a chance to reflect on the contribution both have made to the town.

While photography has been a passion of Robert’s from a young age it wouldn’t pay the bills until down the track. His working life started as an apprentice jockey, riding at Randwick as a 14 year old at the urging of his father.

Robert’s riding developed and under the name of Robert Jacobs, he rode across the Pacific winning big races like the Noumea and New Caledonia Cups.

‘Trainer Jake Gowing kept bringing me to Bega,’ Robert said. A connection to the town that now goes back 43 years.

‘I rode my first winner in Bega and went on to win nearly all the local cups – Bega, Queanbeyan, Canberra, Bombala,’ he said. A record that saw Robert win of the local jockey’s premiership twice. It was during that time Robert met his wife Gail Miners, a local nurse.

An accident on Bega Cup race day in 1988 ended his riding career. A horse named Bungarby tried to burrow under the starting gates injuring Robert’s hand. Ironically Bungarby was a horse Robert had ridden to a win on nine previous occasions.

So in his early thirties and with over 1000 winners behind him, Robert shifted his focus to a growing interest and skill in photography and into business. Shortly after, Gosford girl Christine Murphy came to Bega with husband John and their two children after traveling Australia for a place to call home.

Chris approached Robert looking for work and one to the town’s most significant business partnerships was born. For the first 10 years of the partnership, their company known as Magnum Photo Supplies looked after 300 photo shops across Australia and beyond.

The business was was eventually sold to Hanimex, now known as Fuji, leading the way to purchase the Fletchers Fotographics retail outlet from Barry and Barbara Chambers.
That was 20 years ago. Robert and Chris also set about combining the bread and butter of business with active and high profile community involvement.

Robert was president of the Bega Chamber of Commerce for  14 years and chair of the Bega Valley Shire Business Forum for 16, working side by side with Chris to inject colour and energy into Bega’s main street.

‘I don’t think the contribution of Robert and Christine can ever be over-rated,’ said Anna Glover, former Editor of the Bega District News and Chamber deputy-president.

‘They launched the “Bega on the Go” campaign to fund special events for the whole town,’ she said. ‘Usually fun, family-friendly events such as the tilt at getting Bega into the Guinness Book of Records for the biggest pajama party in the World.

‘These sort of activities led to the Bega Chamber of Commerce being judged the best chamber in the State on three separate occasions by the NSW Business Chamber.’

While these sort of events brought people and their wallets into town and through the door of main street traders, bigger ambitions were at play. With the sale of Bega’s Foodworks supermarket to Woolworths in 1999 the door opened on a major shake-up of the town’s traditional country CBD.

By the end of 2011 the small Foodworks footprint and former RSL Club site on Auckland Street had been swallowed by a shopping complex that boasted Big W, a full Woolworths supermarket, Dan Murphy’s bottle-shop and around 20 specialty stores.

(Photo retailers will understand how much Robert must have put the town of Bega before his own interests given this next statement! – KS):

‘If it hadn’t been for Robert’s support as chamber president, the Big W development would never have happened,’ says Cr Tony Allen, former Mayor of Bega Valley Shire Council. ‘Robert supported the project for the greater good, at a time when many landlords and other main street traders feared for their future. His (Robert’s) behind the scenes involvement was instrumental.

Robert and Christine’s legacy extends beyond the big and touches the most human and personal moments of life in a regional town. What isn’t widely known is that for many years, using the resources of  Fletchers, Robert and Chris produced funeral booklets and slide shows free of charge for local grieving families.

With the sale of their long running business, these familiar faces on Bega’s main street aren’t planning on retirement. While both Robert, a father of three and Chris are keen to spend more time with their growing gaggle of grandchildren, the pair will continue to work together under the banner of Robert Hayson Photography, a business that has been run side by side with their retail outlet but isn’t part of the Fletchers sale.

‘We have weddings booked through until 2017 that we will be honouring,’  said Robert.
It’s a side of the business that has received global attention, winning three international awards for wedding photography, the most recent in December last year.

Robert has also announced that he will be a candidate at the Bega Valley Shire Council elections this September.

‘One thing I really want to do (as a Councillor) is look after the whole area, not just where I live,’ said Robert.
– Ian Campbell,
AboutRegional.com.au

PhotoCounter has a chat with Robert about photo retailing in 2016 – coming next week! Thanks again to Ian Campbell for permission to re-publish this story.