Canon has announced two accessories – a new high-end Speedlite 600EX II-RT, and the EF-M 28mm f/3.5 Macro IS STM, a macro lens with built-in ringlight for its M-series cameras.

In keeping with the recent fetish for claiming every new photographic product is some sort of ‘world first’, Canon is claiming that the new lens is ‘the world’s first autofocus lens which is capable of focusing at both infinity and at 1.2x magnification.’ It’s also the world’s lightest macro lens for mirrorless cameras (130g). And the first macro autofocussing lens with a ringlight

Close focussing distance is down to 13mm.

A firmware update will be released at the end of May for the EOS M3 and EOS M10 which will increase AF speed when shooting movies with the lens. 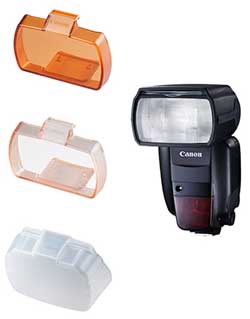 Scheduled for release in July, the Speedlite 600EX II-RT is a powerful, high-performance flash ideal for fast frame-rate shooting. Canon says it’s big Guide Number of 60 (metres/ISO 100) allows it to capturing the whole congregation at a wedding. (Well, maybe not if it’s a Kardasian wedding!) It covers focal lengths from 20mm to 200mm, with extension to 14mm via the built-in adapter.

It has an extended battery life which lasts twice as long again with a new CP-E4N external battery pack.

Wireless slave function…radio control function up to 30 metres…up to 15 Speedlites can be used together off-camera…. It includes a bounce adapter…rotating bounce flash… and clip-on coloured filters.