‘Game On!’ with new Canon EOS R cameras and lenses

UPDATED WITH LOCAL PRICING, July 13: Margaret Brown, our camera and lens reviewer, and technical editor of Photo Review Australia, had the opportunity to handle the new Canon releases last week, and gives her first impressions on the new additions to the range, including a robust argument for the logic and utility of the forthcoming – and remarkably affordable –  f11 long telephoto lenses!

Canon has made the biggest new products announcement of any equipment manufacturer so far this year, unveiling two new cameras, four lenses plus two extenders and a new A3+ printer last night at 10pm, Eastern Australian Time.

Details of most of these products have been available for a while, both through ‘teasers’ posted by Canon and (semi-official) leaks via the Japanese blog, Nokishita (https://www.nokishita-camera.com/p/about.html).

Two new ‘full frame’ R-series cameras – the 45-megapixel EOS R5 (above) and the EOS R6, which has the same 20.1-megapixel sensor as the EOS-1D X Mark III – will join the existing EOS R and RP cameras, filling out the range and bringing 5-axis In-Body Image Stabilisation (IBIS) to the line-up.

Both cameras’ IS mechanisms can integrate with the Optical IS systems in RF lenses to achieve up to eight stops of shake correction, including with the RF 85mm f/1.2L USM and RF 28-70mm f/2L USM lenses, which lack built-in IS.

Both cameras utilise the same DIGIC X processor as used the EOS-1D X Mark III for image processing and both cameras support the HEIF (High Efficiency Image Format) recording format introduced with that camera. Offering similar compression levels to JPEGs (and almost identical file sizes), HEIF claims a two to one increase in compression over JPEG at similar quality levels. It is more efficient and able to record higher bit depths (up to 16 bits) plus a wider dynamic range, making it ideal for HDR recording.

The next-generation Dual Pixel CMOS AF II autofocusing systems in both cameras are significantly better than the original Dual Pixel CMOS system, enabling both cameras to focus in as little as 0.05 seconds and at lower light levels. The EOS R5 can focus down to -6EV, while the EOS R6 is the first EOS camera to offer a minimum EV for AF of -6.5EV.

The iTR AF X AF system uses algorithms fine-tuned for face/eye detection and can recognise and track faces, heads and eyes of humans, and now also cats, dogs and birds in both still and movie modes. Tracking will continue regardless of the subject’s size, posture, orientation or the direction it is facing, even with normally unpredictable subjects.

Up to 20 minutes of 8K footage can be recorded, according to Canon Australia, with recording time limited by heat build-up in the camera. How useful 8K footage will be is debatable since there are few devices so far that can display 8K content and Australia’s broadband network has difficulty transmitting even 4K broadcasts. Still, it’s a point of difference that is worth celebrating. The ability to grab a 33-megapixel still from footage recorded at up to 30 fps will be worthwhile to many users.

The EOS R6 (above) looks like being the more popular – and more interesting – camera of the pair and if 20.1 megapixels is considered adequate for the EOS-1D X Mark III, it should surely be enough for most pro and enthusiast stills shooters. While the R6 is pitched to appeal to photographers who shoot both stills and video footage, it’s the video capabilities that make this camera really shine. Although it’s limited to 4K output, the 4K footage is achieved by downsampling the 5K video that is actually recorded, a technique that delivers superior results to alternatives like pixel binning. In addition, 4K footage is recorded at frame rates up to 60p (59.94fps) – or 50p for PAL system users, with the options to record internally in 8-bit H.264 or 10-bit YCbCr 4:2:2 H.265 and Canon Log or capture Full HD footage at up to 120p for ¼ speed playback. Both cameras provide zebra displays for gauging over-exposure.

Both cameras appear to have the same mechanical/electronic shutter mechanism with shutter speeds ranging from 30 seconds to 1/8000 second plus the normal Bulb and time-lapse settings. Flash synch is supported at 1/200 sec. with the mechanical shutter or 1/250 sec. with electronic first curtain synch. Neither camera has a built-in flash.

A new LP-E6NH battery replaces the LP-E6N, offering an increased capacity of 14 percent, while maintaining compatibility with all existing cameras that use the LP-E6 series batteries, such as the EOS R. The optional PD-E1 power adapter can also be used to recharge the battery or power the camera via its USB-C terminal.

The bodies of the R5 and R6 cameras are similar in size, although not identical. The R5’s body is 58 grams heavier, thanks largely to better weather-resistant sealing. There are also differences in the resolutions of the EVF and LCD monitor (although both cameras sport vari-angle screens) as well as Wi-Fi/Bluetooth bandwidth, Ethernet support, voice memo capabilities and support for the wireless file transmitter (see below).

The table below highlights the main differences between the two cameras: 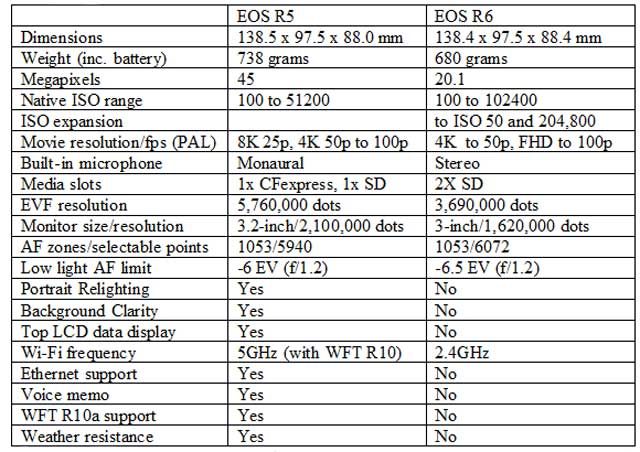 Canon will release two extension grips with the new cameras. The BG-R10 battery grip (RRP $599) accepts two batteries and is compatible with both cameras, while the WFT-R10 is a Wi-Fi transmitter that is only compatible with the EOS R5 and is designed primarily for wireless file sharing. It supports a frequency of 5GHz, enabling SFTP over Wi-Fi plus gigabyte speed via an Ethernet port. Both cameras can be connected to smartphones and networks via Wi-Fi for fast file sharing and remote control of the cameras through the Camera Connect and EOS Utility apps. Tethered camera control is also available via Wi-Fi or high-speed USB 3.1 Gen 2 connections and image files can be uploaded automatically to Canon’s image.canon (https://image.canon/st/en/index.html?region=1) cloud platform, which offers 30 days of free storage and integration with Google Photos or Adobe Cloud workflows.

Announced with the new EOS R5 and R6 cameras are four new lenses, all featuring Canon’s programmable Lens Control Ring on the barrel. Two lens extenders are also being announced.

The most interesting – and revolutionary – of the new lens releases are two affordable and lightweight super-telephoto lenses, which have been designed for enthusiast photographers. Featuring extending barrels to make them easy to carry, fixed f11 apertures and focal lengths of 600mm (right) and 800mm, they are expected to sell for less than $2000, according to Canon Australia staff. We’re betting the tall-poppy pruners will be out with their secateurs to reduce any implied praise of these lenses. But if they do, they’ll miss the entire point of Canon’s brave (and smart) initiative.

Both of the new lenses use gapless, dual-layered diffractive optics in their optical designs. Canon has considerable expertise in this technology, having used diffractive optical (DO) elements in super-telephoto lenses since the EF 400mm f/4.0 DO IS USM was introduced in September 2000. Because they make it possible to produce more compact and lighter lenses without compromising image quality, it makes sense to use the latest DO elements in these new lenses.

While a fixed f/11 aperture might have been questionable a few years ago in anything but a mirror lens, the latest developments in stabilisation, AF technologies and ISO performance; not to mention the bright, high-res EVFs in the new cameras with their fast refresh rates will remove potential impediments. Built-in stabilisation provides up to four stops of shake correction with both lenses. Canon hasn’t specified how much this would be extended on the new EOS R5 and R6 camera bodies, although it’s not unreasonable to expect another stop or two in optimal conditions.
A similar assessment applies with autofocusing. Both lenses support Dual Pixel CMOS AF when paired with a Canon EOS R camera and the second-generation version of the system with the R5 and 56. In addition, STM (stepping motor) AF drives ensure fast, accurate and quiet autofocusing, making them ideal for video recording. Like their EF equivalents, the RF 600mm and RF 800mm (above) can focus down to 4.5 metres and 6 metres, respectively.

These new RF super-telephoto lenses will be welcomed by a wide variety of potential purchasers, ranging from aspiring sports and wildlife photographers through birders and travellers to parents who simply want to take great close-ups of their children playing sport or for candid snapshots. The only negative feature we can see with these lenses is that Canon doesn’t provide the lens hood with them. Instead, it’s an optional extra – which we believe is actually essential with lenses of this type. Both lenses are due for release on July 30.

The RF 100-500mm f/4.5-7.1L IS USM (above) is the new, weather-sealed flagship in the L-series of RF telephoto zoom lenses. It supports 5-stops of IS when used with the EOS R or RP, or 6-stops with EOS R5 and EOS R6, making it ideal for hand-held shooting in low light levels as well as for videography. Three stabilisation modes are provided: IS mode 1 for still subjects, IS mode 2 for panning and IS mode 3 for irregular movement. The in-lens Optical Image Stabilisation (OIS) can also be combined with Movie Digital IS to ensure steady footage when recording while walking.

Dual Nano USM AF motor technology ensures fast, accurate and near silent autofocusing, making it ideal for capturing wildlife and uninterrupted video recording. Close focusing is available down to 90cm, through its innovative floating focusing system. The zoom ring has adjustable torque that allows it to be made tighter or looser, depending on the photographer’s requirements. Nine diaphragm blades close to produce a circular aperture for smooth bokeh. This lens accepts 77mm diameter filters and has a maximum diameter and length of 93.8mm and 207.6mm, respectively. The ET-83F lens hood is supplied, along with the E-77II lens cap and LX1328 lens case. Expect to see this lens in September. Local price is $5699 (US price is US$2699).

The RF 85mm f/2 Macro IS STM is a wide-aperture portrait lens that can capture images at half life-size magnification and features five stops of in-lens OIS. With an optical design consisting of 12 elements in 11 groups, it contains one UD lens and can focus to within 35cm of a subject. The nine-bladed iris diaphragm closes to a circular aperture for smooth bokeh. This lens is 90.5mm long and weighs approximately 500 grams. It accepts 67mm diameter filters and the ET-77 lens hood, which is available as an optional accessory. This lens is scheduled for release in October with local pricing of $1290 (US pricing of US$599).

Also scheduled for July release are the new EXTENDER RF 1.4x (local $1110, US$499) and EXTENDER RF 2x (local $1340, US price is $599), which have been designed to expand the capabilities of the RF 100-500mm f/4.5-7.1L IS USM as well as the RF 600mm f/11 IS STM and RF 800mm f/11 IS STM lenses, while maintaining the image quality and speed benefits of the RF Mount. Both use advanced high-refraction, low-dispersion glass to control curvature of field and chromatic aberration of magnification. They also feature an optimised lens coating and a three-layer combined lens to reduce ghosting and include a heat shield coating to prevent performance deterioration in high temperatures. Weather-resistance is provided when they are used with a compatible L-series RF lens. Note that when used with the RF 100-500mm f/4.5-7.1 L IS USM, zoom range is limited to 300 to 500mm when the extender is connected to prevent the lens’s rear elements from hitting those of the extender.