Canon Australia has announced the post-Photokina launch of its entry into the mirrorless interchangeable category, the Canon EOS M.

The EOS M will launch in Australasia in October with two specially-designed new lenses – the EF-M 18-55mm f3.5-5.6 IS STM standard zoom lens, and the EF-M 22mm f2 STM ultra compact pancake lens – along with the ability to use the full line of Canon EF and EF-S lenses through the optional Mount Adapter EF-EOS M.

Canon says the camera will sit between the 600D ($680) and the 650D ($890) in Canon’s pricing hierarchy, with street pricing ‘set at dealer discretion’, according to the press release. (Canon is no longer providing RRPs for general publication.)

‘The new Canon EOS M is for people who want an EOS camera with them wherever they go, ready to capture life’s moments in the highest quality,’ said Rebecca Pearson, assistant brand manager, Canon EOS, Canon Australia. ‘These people are aware of the limitations of their current compact camera or smartphone but, while they’re serious about taking great shots, they want to be lost in the moment, not the camera manual.

‘Existing EOS digital SLR camera users will also welcome the option of a compact camera body to use with their existing EF and EF-S lenses as the situation requires.’

The EOS M has been developed alongside the new EOS 650D digital SLR camera and shares many components, including the 18-megapixel APS-C sensor with on-chip phase detection AF and the DIGIC 5 image processor. The removal of the mirrorbox assembly and viewfinder delivers a camera which is around 50 percent lighter and significantly smaller, with the same high image quality.

The EOS M has outstanding low-light shooting performance, according to Canon, with an ISO range of 100–12,800 expandable to 25,600 (H), and 4.3 frame-per-second high-speed burst shooting (One Shot AF). 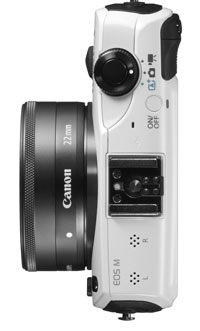 In Creative Auto Mode, the EOS M makes creative shooting easy by allowing inexperienced photographers to control certain elements of the image. When taking a portrait, for example, the degree of background blur (‘bokeh’) can be adjusted on screen using a sliding scale, eliminating the need to understand technical concepts such as aperture settings. Moreover, seven Creative Filters are provided.

Gap in the market

Elaborating on Canon’s marketing approach with the EOS M, Canon Australia’s EOS product manager, Rebecca Pearson said that the camera addressed a gap in the market.

According to the latest CDLI report, she said, ‘more and more people are taking more photos than ever before.

‘People today are not wanting just to capture a child’s birthday party or family holiday, or Ladies’ Day at the races. They are wanting to document last Saturday’s dinner party and even the dessert that they cooked. And these things are becoming acceptable – so it’s absultutely meaningful for you to take a photo of dessert you just cooked and want to share that with people.’

‘Meaningful photos’ demand quality, she said, but in some social settings – for instance an informal barbeque – a DSLR isn’t appropriate, but on other hand ‘a smartphone or compact camera is not necessarily going to give you the quality you want to capture that moment and do it justice.

‘So there is a gap in the market between those serious photo taking situations that warrant a DSLR and the situations where you need more than a compact camera or a smart phone.’

Canon is describing the target market for the EOS M as ‘Playfessionals’ and will use this term in marketing the new camera: You are a Playfessional if ‘you want to aspire to take great photos – you don’t want to aspire to be a photographer. You want a camera that’s going to give you the quality you want but that’s small enough to go everywhere with you, and easy enough to allow you to stay in the moment you are trying to capture.’

She said the marketing campaign will depict a number of those moments where you want a small camera that can go anywhere with you but without compromising on quality.

The prrimary audience is people who are new to the interchangeable lens category.

‘They are aware of the limitations of compact cameras and smartphones and really desire that quality in a compact and stylish and fun body that’s easy to use.

‘Existing EOS users also are going to be very welcoming of the option to use this as a compact body and attach their EOS lenses and accessories.

‘Really the timing is right for us now. We know that consumers demand Canon in every segment,’ she said.

The marketing campaign for the EOS would feature online ad placements and extensive in-store POS.

Along with the EOS M camera, Canon is also introducing a new series of lenses that leverage Canon’s STM technology for smooth, silent focussing and, when used in combination with the Movie Servo AF feature, continuous AF while recording video. The STM technology in the new lenses allows the camera’s stereo microphone to only record the sounds of the scene being shot and not lens motor noise.

The EF-M 22mm f2 STM ultra compact pancake lens is ideal for shooting still scenes such as family portraits or when travelling. The wide f2.0 aperture and the APS-C sensor combine to deliver good depth of field control for both stills and video.

The new EF-M 18-55mm f3.5-5.6 IS STM is a standard zoom lens for general. Both have been designed specifically for use with the EOS M.

In addition to the two lenses, any of Canon’s EF and EF-S lenses can be used with the EOS M camera with the optional Mount Adapter EF-EOS M. Using the adapter allows the camera to be fully integrated into the EOS ecosystem of more than 60 Canon EF and EF-S lenses. When shooting EOS movies, the adapter allows key features such as Movie Servo AF for continuous focus tracking of moving subjects to be used.

Canon has also announced a new compact and lightweight flash unit, the SpeedLite 90EX, capable of coverage for 24mm wide angle lens shots, with a Guide Number of 9 (metres at ISO 100). The flash can wirelessly control slave units for creative multiple-flash shoots and uses the standard Canon EOS hotshoe mount for compatibility with all EOS DSLR cameras and PowerShot digital cameras that include a hotshoe.

(And a reminder that all the largest library of Australian camera and photo accessory reviews, courtesy of Photo Review, is just a click away for Photo Counter readers.)