Photographers are losing the images they capture and other irreplaceable data because they fail to adequately back up their memory cards, computers, tablets and smartphones, according to new research from Europe. 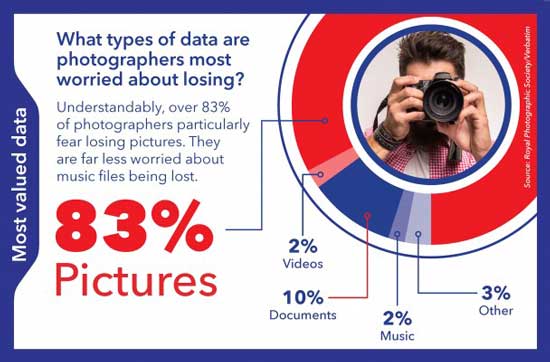 Over a quarter of the 1800 photographers who took part in the international survey by Verbatim and the Royal Photographic Society, undertaken to coincide with World Backup Day on March 31, have experienced data loss on their home computer or smartphone.

One in five photographers choose not to back up data frequently on their computers because they admit they are too lazy or it takes too long. A third of the photographers NEVER back up their mobile phones or tablets despite nearly one in 10 confessing they had accidentally dropped such devices into the bath or down the toilet.

Understandably, photographers are most worried about losing pictures, followed by personal documents, videos and music. With the average respondent estimating they store around 220,000 photos on computers, smartphones, tablets and data storage devices, nearly 400 million images are in danger of being lost by the survey’s participants unless they take precautions.

‘One would naturally assume that photographers would be more careful than most to safeguard against data loss. However, the results of this survey reveal that backups are not being done routinely and that data loss is more prevalent that one might expect, even among professional photographers,’ notes Dr Michael Pritchard, Director-General, the Royal Photographic Society.

‘…I would suggest people should treat every day as if it were World Backup Day.’ 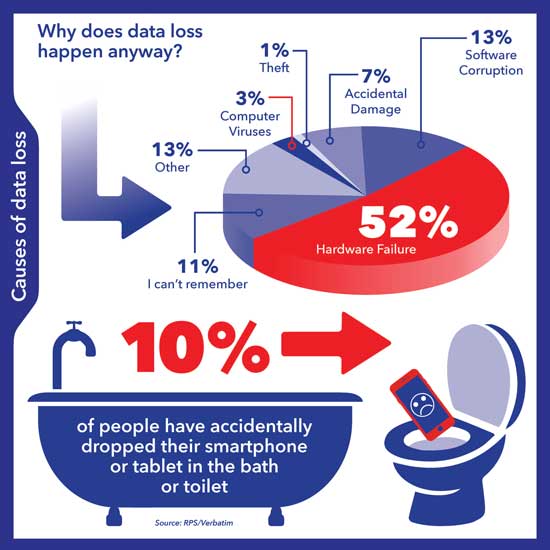 ‘While it is crucial to remember to do regular backups, it is also vital to follow the accepted best practice of data loss prevention: the ‘3-2-1 rule’, said Rüdiger Theobald of Verbatim. This rule can be summarised as making at least three copies on two different types of media with one of those devices kept in a different location to the others. Each of those measures is meant to ensure that at least one backup of your data will survive if calamity strikes your computer, tablet or smartphone.’

Dozens of respondents in the survey have reported losing pictures, including wedding photos, and important emails and documents. One mentioned a maddening loss of over six years of photographic work while another had lost precious family photographs. Over 10 percent admit they never backed up the contents of their mobile or laptop in the past year, leaving them without purchased software and music.

Photographers experienced data loss on their PC because of hardware failure (52 per cent), software corruption (13 per cent), accidental damage (7 per cent), a computer virus (3 per cent) and theft (1 per cent).

Computer data recovery is a tricky business. Where physical failure has occurred, and the hard drive needs to be worked on in a clean room, typical costs can be in excess of $1000, and there’s no guarantee all the data will be recovered.

Cloud over cloud services
Online backup services have flourished in recent years. However, a third of photographers participating in the survey say they have suffered problems of access to Cloud-based data files while 5 per cent have experienced data loss when using Cloud storage solutions.

‘It’s not wise to rely solely on online storage providers because there’s no guarantee that you won’t lose your data. Online backup services are a great addition to local backups, not a substitute for them,’ noted Verbatim.

‘What is also apparent is that people do not pay as much attention as they should to considering the likely lifetime of the media they use. The average external hard drive and USB/flash memory sticks are very useful for portable short-term solutions although their lifetime is usually limited to less than a decade.’