Seagate Technology has announced it will throw in 200GB of Microsoft OneDrive cloud storage with its Backup Plus family of external storage drives. 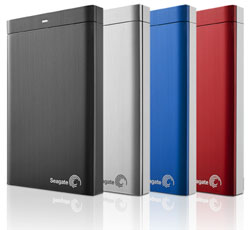 The hardware is supported by Seagate Dashboard software for easy backups, and for photographers, the Backup Plus family of external drives will now feature the ‘Lyve’ app and service, which assists users manage their digital image files.

The Lyve software (by the way, there’s a free version for Windows and Mac and on the two app stores if you don’t actually want to buy a Seagate drive!) helps to organise photos and video files, and synchronises and de-duplicates collections across all devices. It’s compatible with iOS, Android, Windows and Mac OS X. It combines all photos and videos from all devices into a single collection.

Backup Plus external hard drives and Dashboard software enables scheduled or ad hoc backup as well as Facebook and Flickr backup. A Backup Plus drive used in conjunction with the Seagate Mobile Backup app, can also be used to back up a mobile device wirelessly while on a network and by use of a cloud service while away from the home network.

The Seagate Backup Plus Desktop drive, which includes an AC power adapter and USB 3.0, is now available in capacities ranging from 2TB for $129 to 8TB for $599.

COMMENT: Here’s Seagate launching a product which is all about image file collections – hence the story above. So I jump on the local Seagate website to see which outlets from photo retail are stocking Seagate drives. They list six big retailers as stockists, and no photo specialists. Double checking, neither Ted’s, Camera House, Michaels or DCW stock Seagate drives. Someone needs to pick up a phone!