An international survey conducted by Ilford Photo has found that 30 percent of film users are under 35.

The survey was conducted at the end of last year, with thousands of film users from more than 70 countries participating.

Sixty percent of the under 35s using film had been using the grand ol’ analog technology for less than five years.

Around 84 percent of the respondents said that they had taught themselves how to use film with a little help from books and the Internet, and more than 49 percent now develop and print their own pictures in a darkroom.

Of those who responded, 98 percent used black and white film with 31 percent shooting it exclusively. Just 2 percent use only colour film. A remarkable 86 percent of respondents used roll film, with Lomo and Holga cameras popular in this category. (Take this with a pinch of salt, though – remember that the survey was conducted by Ilford Photo – it will have a bias towards the Ilford customer database.) 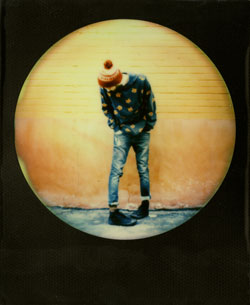 While on the topic of film, Impossible has announced four new round colour films for classic Polaroid 600, SX-70 cameras, and the Instant Lab Universal.

Based on a limited-run of Polaroid film produced in Europe a decade ago, Impossible released a B&W version of this film late last year. And given its popularity in providing a ‘unique and intriguing approach’ well-suited for portraits, the company has now put a splash of colour into its growing line of 600 and SX-70 films.

Impossible started in 2008 when it acquired ‘the last factory in the world’ that manufactured (old school) Polaroid instant film.

The films will be available with either black and white frame editions. No local release date has been announced yet.

Following on from Dr Vint Cerf’s comments on the ‘Digital Dark Age’, Peter Bonisch (left), sales and marketing manager at Fujifilm NZ has thrown in his two cents’ worth.

He says on average, Kiwis store 1200 photos on their smart phones annually – the equivalent of 2GB of data – but that less than 10 percent make it to print.

‘International trends indicate that smartphones will soon become our primary image storing device, ahead of computers, tablets and digital cameras, yet fewer than 10% of those photos are ever printed.

‘We scroll through and reminisce, and share a few photos on social media, but most of them stay on our phone,’ says Mr Bonisch. ‘So if that disappears, so do our photos. People are losing precious reminders of significant events, their friends and their family history.’

And disappear they will, given that on average smart phones lifespan is less than two years according to Recon Analytics.

His advice for those who don’t want to fill a lifetime collection of shoe boxes with prints is to turn their favourite images into wall art or a book. And if they are printed, keep them out of the sunlight and they’ll last a lifetime!

Whereas the Leica APO Vario-Elmar-T 55-135mm f3.5-4.5 ASPH lens covers a focal length of 80-200mm in 35mm format, and is best suited for portraits, sports action and wildlife photography.

I AM Award Winning

Nikon is chuffed to announce that the D750, Df, and 1 V3 cameras are recipients of the 2015 iF product design award.

Each year products are judged and awarded on their aesthetically appealing designs, degree of innovation, and functionality, covering everything from product design through to packaging.

The D750 is the first Nikon FX-format camera to have a tilting LCD monitor and built-in Wi-Fi function, whereas the compact and lightweight Df and 1 V3 are just damn right attractive!

The awards are a globally prestigious industrial awards which has been sponsored by the International Forum Design GmbH of Hanover Germany since 1953.