The ratio of online to in-store sales seems to be levelling off, if the NAB Online Retail Sales Index is any indication. ‘Daily deal’ sites are actually in decline.

And November online sales were actually down on October on a seasonally adjusted basis, falling 0.3 percent.

NAB’s chief economist, Alan Oster said online retail growth continues to outpace that of its bricks and mortar counterpart, but growth is tapering off.

‘The days of 20 per cent plus (online) growth are gone,’ Oster said.

‘We will still think online will go faster – but something like eight to 10 per cent growth.’

This is in the context of overall annual retail sales growth of around 4 percent, according to ABS figures.

Oster said this trend is not only a result of a falling Australian dollar keeping local shoppers away from international online stores.

‘I think it’s also got to do with traditional retailers now matching (online prices).’

‘I think part of the slowdown online is the local guys are adapting to it, so gone are the days where they wouldn’t match an online offering,’ Mr Oster said. ‘The story we get told all the time is shoppers bringing in their laptops with online prices and retailers just say, “fine, done we will match that”.’

All online categories recorded year on year growth except `daily deals’, which contracted 11 per cent.

International sales still account for nearly 25 per cent of Australians’ online spending, but the Australian dollar’s slump against the US dollar should strengthen spending on local sites. 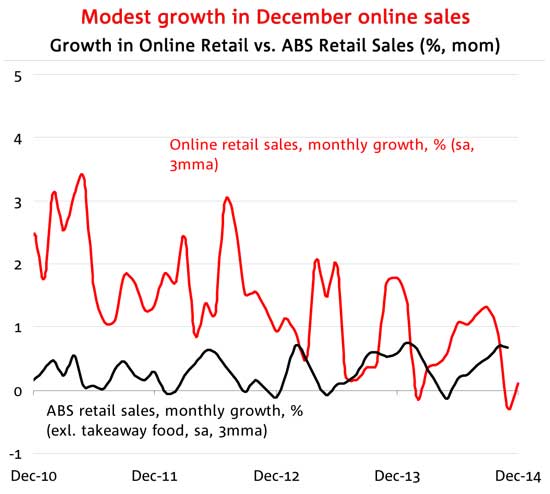