Showrooming and local online trend up

A consumer survey from retailer ratings organisation Canstar Blue indicates that 25 percent of Australians engage in showrooming at consumer electronics stores – getting advice from floor staff with no intent to buy and then shopping around online for the cheapest price. 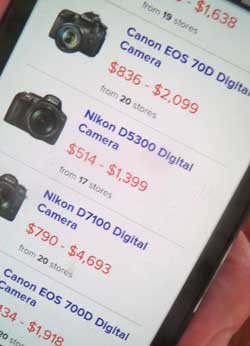 – Given that cameras, lenses and photographic gear in general is particularly specialised, it could be assumed that ‘showroomers’ would be even more prevalent in photo retailing.

Gen Y are the worst offenders – they are three times more likely than Baby Boomers to use stores as a source of free advice. Only one in three showroomers said they felt guilty doing so. (With the likes of Choice and the mainstream media making Australian retailers out to be evil, unprincipled price gougers, this is disappointing, but not surprising.)

Online on the up

While those showroomers might be wasting retailers’ time and money, they can perhaps take some solace in another piece of research which indicates most online sales are at least local.

Three in four Australians are making online purchases, according to the Sensis e-Business Report, but only 25 percent are buying from overseas, down from 32 percent last year.

As online retail grows, the research shows more than 80 percent of SMEs (not necessarily retailers) who trade online are selling their products to customers in the same city or town.

The Sensis e-Business Report also showed 69 percent of SMEs with websites said it improved the effectiveness of their business, mainly by increasing their exposure.

Only 26 percent of SMEs said their websites worked with smartphones – up from 17 percent last year. But with 78 percent of Australians now at least occasionally accessing the internet on their mobile phones, there is an opportunity for improvement in mobile-friendly websites.

Just  2 percent of respondents said they were connected to the National Broadband Network.

Meanwhile, the most recent NAB Online Sales Index confirms a growth in local online sales as a proportion of total retail sales.

However this growth is at a more subdued pace than in previous years. In 2011, 2012 and 2013 the average annual growth rate for online sales were 31.7 per cent, 22.2 per cent and 16.2 per cent respectively. In the 12 months to July 2014, this had dropped to just 8.6 percent. Australians spent an estimated $15.59 billion on online retail — around 6.6 per cent of the traditional bricks and mortar retail sector.