While online shopping continues to grow, it is projected to account for under 10 percent of total retail sales by 2017 – up from 7 percent this year, according to a survey of 1000 Australian consumers.

These are the conclusions by market researcher Frost & Sullivan. Meanwhile, another (perhaps more self-serving) survey, by Paypal Australia, indicates that Australian retailers as a whole stand to make roughly as much from cross-border sales as they will lose to offshore online competitors.

According to Frost & Sullivan, total online spending in Australia is forecast to amount to $18.3 billion in 2013, with the average annual spend online per online shopper in Australia at $1750.

‘We expect continued growth in online sales over the next five years, with a Compound Annual Growth Rate (CAGR) of 13.1 percent. Online sales as a percentage of total retail sales are predicted to increase from 7 percent in 2013 to 9.8 percent by 2017,’ said Phil Harpur, senior research manager, Australia & New Zealand ICT Practice, Frost & Sullivan.

The Frost & Sullivan report seems to be pointing to channels other than CE and photography as the source of growth: ‘Overseas retailers such as ASOS and Macy’s have been actively targeting the Australian market over the last couple of years. This has increased the overall level of competition in the local online retail market. Local retail chains have also stepped up their online activity, creating increased awareness amongst consumers and increased media coverage of online shopping,’ Harpur stated.

-Seventy-nine percent of Australians who shop online currently purchase from overseas sites to some extent, according to the survey, and an estimated 45 percent of Australian online expenditure goes to overseas-based web-sites according to Frost & Sullivan. (NOTE: This is a far higher proportion than we have seen in other estimates of online sales to offshore retailers.)

Large local retail chains from Myer to Ted’s Cameras have been improving and expanding their online offerings and this has raised the overall range of goods and services available locally. Increased online presence of large retailers has also raised awareness for all local online retailers.

The report claims that mobile shopping ‘has already seen widespread uptake in Australia’. Thirty percent of all Australian internet users aged between 15 and 65 have purchased physical goods online during the last 12 months via a smartphone, whereas 19 percent have purchased via a tablet.

The immediacy of mobile devices, having them available anywhere and anytime, gives online retailers significantly more opportunities to engage shoppers with relevant offers when and where they are making buying decisions, encouraging impulse purchasing. Fifty-two percent of smartphone users have used their smartphone to find a nearby store and 38 percent have used it to compare prices before shopping for items.

‘As the concept of omni-channel retailing grows, online retailing will be regarded as an integral part of the overall shopping experience. By collecting and analysing online data, online retailers can make the online shopping experience personal, strengthening relationships with the customer by delivering customer preferences in real time, which can increase repeat sales,’ Harpur opined.

‘As traditional retailers have the ability to implement true omni-channel strategies, this allows them major competitive advantage over players with an online strategy only. For example, they can make the process of shopping online and picking-up in store work effectively by integrating in-store stock and sales systems to their digital platform or by providing in-store kiosks where consumers can order or purchase online in-store and have purchases delivered to their home at a later date.’

While the Frost & Sullivan report puts the online challenge in context, the Paypal Australia report actually identifies opportunities for local retailers to join their offshore colleagues in the global marketplace. In fact the $5 billion it predicts will be spent by foreigners (are you allowed to say ‘foreigners’, or is that xenophobic these days?) with Australian online retailers this year evens up the spend by Australian consumers with offshore retailers. 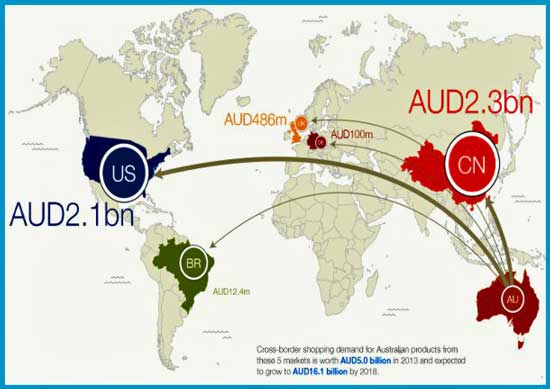 The new study, released this week by PayPal and conducted by Nielsen, ranked Australia as one of the world’s six key shopping destinations for cross-border shopping.

The study samples the views of more than 6000 online consumers aged 18 and above across six countries – including Australians, it should be emphasised. The respondents have all made purchases on international shopping websites in the previous year, with the research estimating 94 million cross-border shoppers will spend $105 billion online this year.

The study predicts cross-border online shopping will contribute $5 billion to the Australian economy this year, with shoppers in China ($2.3 billion), the United States ($2.1 billion) and the United Kingdom ($486 million) most interested in buying our products.

(It’s hard to see the photo industry getting much of  benefit, except perhaps Photo Create for photo gifting. Pentax cameras out of Australia are price competitive in the global market, but not much else.)

– Unfortunately, this Paypal report is a little misleading because Australian consumers are included in a survey group. Their expressed intention to shop overseas is then included in the findings – hardly useful when addressing the potential opportunity for cross-border sales for Australian retailers.