Chinese drone king DJI has announced the Osmo, a  4K/12-megapixel camera and gimbal with a detachable handle, which essentially enables gimbal-stabilised hand-held video and stills.

The Osmo combines the existing DJI Zenmuse X3 camera/gimbal with a handle incorporating what could be described as upmarket selfie stick features. 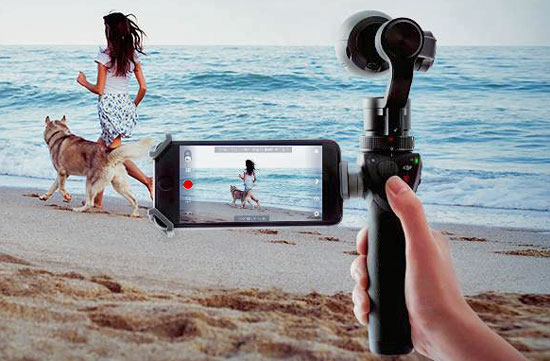 Basic controls for the camera and gimbal are provided on the handle itself, including a joystick for manual pan and tilt. For monitoring and more advanced operation, there is a Wi-Fi link allowing Osmo to be tethered to a mobile device running the DJI GO iOS app.

An included mobile device holder turns a smartphone into an on-board monitor. The Wi-Fi features a range of up to around 30 metes for remote operation.

The camera system incorporates three motors which stabilise the camera as well as moving it manually in relation to the handle. Using the handle’s joystick or the app, it can be panned over a 320-degree range, tilt down 35 degrees and up 130 degrees.  It can pan or tilt at a rate of up to 120 degrees per second 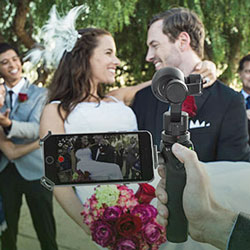 Other features include an automatic panorama mode and time-lapse recording.

DJI claims the stabilisation system in the Osmo keeps the camera almost totally still so you can capture stills of up to 2 second exposure without a tripod.

An integrated microphone allows onboard audio recording. A standard 3.5mm port is also available, so you can plug in your own microphone.

DJI is distributed to the photo industry by CR Kennedy. The Osmo will be available in Australia in November at a local RRP of around $1099. There is also a range of accessories such as car and bike mounts.