The graph below, from Heino Helbig of German-based marketing consultancy, Mayflower Concepts, provides a sharp illustration of the current state of the camera market, as well as placing it in historical context: 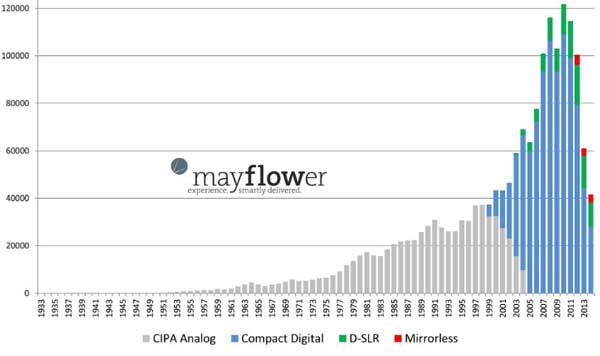 Mr Hilbig has been sharing this graph – based on Japanese CIPA figures – as a kind of teaser for his presentations at PMA in January. Now, if you show a graph like this to a photo industry audience it’s a good idea to have some good ideas about how to address the catastrophic scenario you’ve just confronted them with! The ex-Olympus Europe marketing manager has a few up his sleeve.

But just to slightly blur the lines in this chart – it doesn’t include non-Japanese camera makers who weren’t around 10 years ago, such as Samsumg,and GoPro. It also shows camera volume rather than sales in dollars – and average selling price has increased as the budget compact market collapsed.

Nonetheless the speed at which the camera market has fallen back almost to pre-digital camera levels is about as dramatic a change in consumer buying behaviour as you are likely too see. In just four years, the market has shrunk to about a quarter of what it was in 2010. If you are still surviving as a photo specialist after that kind of carnage, then take a bow!

In this instance the blessing (rather than the devil) is in the detail. That growing green bar – DSLRs – and then the addition of the red tips – mirrorless interchangeables – is the up-side to this graph for photo specialists. It’s what specialists sell, and also where they should have a competitive edge. And as noted previously in Photo Counter, the love available from camera distributors is a finite thing – there’s only so much to go around. The channel specialising in selling the highest margin 30 percent of cameras (plus lenses) should be feeling that love in the 2015 camera market more so than in, say, 2010. 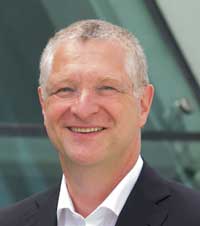 And Mr Hilbig’s solution? Well, first he he questions the common assumption that smartphones have led to the demise of the dedicated digital camera. He’ll concede an influence – and that’s partly the contrast between the complexity of a camera and the simplicity of a smartphone camera – but maintains in a recent PMA Podcast ‘there is no correlation between smartphone growth and cameras shrinking.’

He thinks the real problem is that camera makers have got it all wrong – instead of jamming ever-more features and Scene Modes into cameras, they should make them easier and more enjoyable to use. Less buttons. By turning consumers off with over-complex technology ‘we are educating a generation which only knows the camera as a symbol on their smartphone.’

The marketing corollary of this is that there should be way more emotion in the way cameras are marketed, instead of continually harping on about megapixels, three point five stops of image stabilisation, and art filters.

‘We make it too complex for consumers to use our products,’ he said.

They say that a definition of insanity is doing the same thing and expecting a different outcome. Perhaps the camera companies should listen to what Mr Helbig has to say.

He will be presenting twice at CES/PMA in Las Vegas next month – on Monday Jan 5 and Tuesday Jan 6.