One of photography’s most over-rated images, Man Ray’s 1924 Le Violon d’Ingres has sold for $17.7 million at Christie’s New York auction of Surrealist art. This is far and away the highest price ever paid for a photographic print at auction. 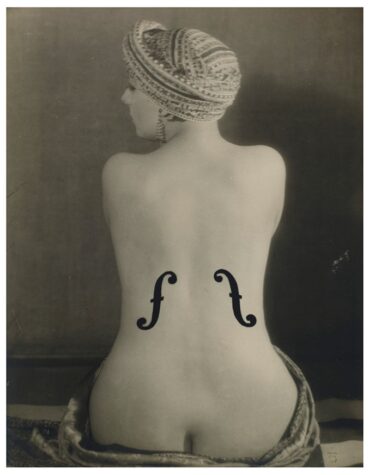 Initial estimate was that the photograph would make $7 – 10 million.  The previous record holder was Andreas Gursky’s 1999 landscape photo, Rhein II, while sold at Christie’s in 2011 for around $6 million.

This is the first time the photograph, acquired from Man Ray himself by a successful New York fashion retailer in 1962, had been offered for sale.

Man Ray first photographed model, performer, and lover Alice Ernestine Prin (aka ‘Kike de Montparnasse’ and then painted the f-holes onto the print before photographing it. It is apparently resonant of Ingres’ 1808 painting The Valpincon Bather.

While Man Ray was a photographic trailblazer, especially with his solarization techniques, he had a few misses along with his hits. He himself would probably be surprised that the somewhat undergraduate Le Violon d’Ingres  (a term alluding to a ‘hobby’ or an ‘enthusiasm’) is still regarded as among the latter – to the tune of $17 mil.

Macro shooting is assisted by an exceptionally short minimum focusing distance of 0.095m with a magnification ratio of 0.25x (35mm camera equivalent: 0.5x). The filter diameter is 55mm, with a 7-blade circular aperture diaphragm.

Videographers are catered for by aperture blades which open and close without visible steps, ideal for variable lighting conditions.

It will be available in July.

Production and shipment figures from the Japanese camera manufacturers indicate signs of recovery, surpassing rates in the first quarter of 2020 – when Covid sent the world into a spiral – but still not reaching 2021 levels, when a lack of camera components, particularly computer chips, hit production hard.

An interesting aberration in the first quarter 2022 figures is that in ‘The Americas’ market, which includes the US, DSLRs are making a major comeback: While mirrorless shipments to The Americas are down 25 percent on Jan-Mar 2021, DSLRs are up 16 percent, and more in value terms. Worldwide, overall shipments of interchangeables are down around 15 percent on 2021 levels.