CIPA, the (Japanese) Camera & Imaging Products Association, has released a report looking at 2015 performance of the camera industry and forecasting 2016 shipments. The following is a (lightly) edited version of that report:

Since CIPA began compiling records in 1999, digital camera shipments recorded steady growth surpassing 100 million units for the first time in 2007. Shipments, however, fell for the first time in 2009 due to the global recession, and fell again in 2011 because of the serious impact that the Great East Japan Earthquake and flooding in Thailand had on production.

Although shipments were expected to recover in 2012, they shrank again that year, and since then shipments have continued to decline through 2015.

Shipments of interchangeable lens cameras contracted  5.7 percent year on year, while compacts went down by 24.5 percent in unit terms.

The result in interchangeable lens cameras is a clear improvement compared to 2014, when shipments declined 19.2 percent but there were expectations that the year-on-year declines since 2013 would come to an end because shipments in some months of 2015 rose dramatically and (in June and July) exceeded those in 2014.

Broken down by regions, shipments of digital cameras with a built-in lens to Japan
contracted 17.8 percent year on year while shipments to regions outside of Japan fell 25.6 percent.

Digital cameras with a built-in lens have faced fierce competition with the advent of the
smartphone. Digital cameras with an interchangeable lens, however, provide picture
quality that is completely different from that of smartphones and demonstrate an
unrestricted expressiveness when combined with highly individualistic exchangeable
lenses, which continue to excite camera fans, and demand for these cameras remains
firm.

However, even for digital cameras with a built-in lens, companies have launched efforts
to appeal to consumers using diverse approaches unique to each company, such as high
definition devices with massive sensors and action camera products, whose use is
rapidly expanding to new fields, and shipments are expected to increase in the future.

Lenses in 2015
Shipments of the core lenses for these cameras totaled 21.70 million units, a
year-on-year decrease of 5.5 percent. This is about 1.6-1.7 times the shipment of digital
cameras with an interchangeable lens (the body for those lenses). 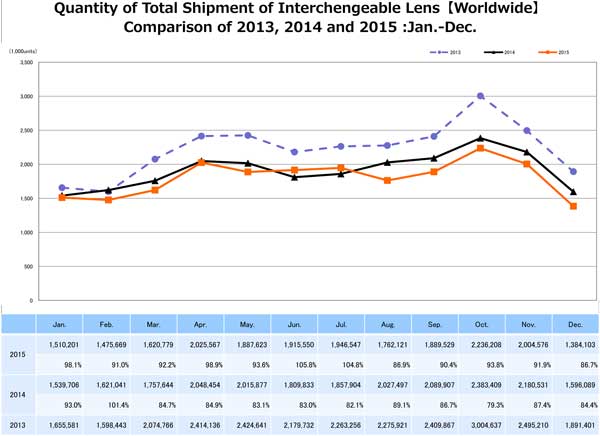 This is because the range of users is expanding due to a wider lineup of both single lens
reflex and non-reflex cameras, the two broad categories of digital cameras with
interchangeable lenses, and a growing number of users are awakening to the pleasure of
possessing numerous lenses and using each one for a particular purpose because they
are interchangeable.

The 2016 outlook
Total shipments (the cumulative total of shipments from January to December) of digital
cameras in 2016 are projected to be 31 million units, a year-on-year decline of 12.4 percent.

Broken down by product type, shipments of cameras with a built-in lens are projected to fall by 16.6 percent. 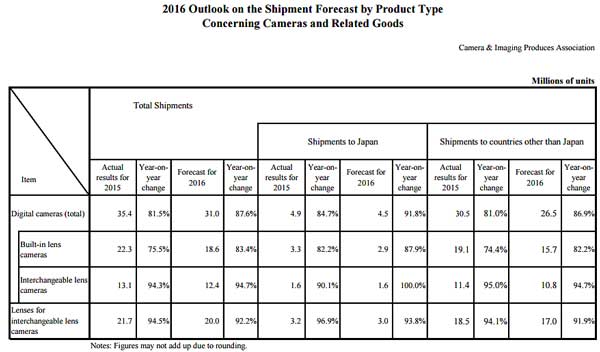