Ethiopian fine art photographer, Aïda Muluneh, has described an Italian student’s image, showing in a group exhibition at the Milan Photo Festival, as ‘blatant plagiarism’ of her best-known photo, Inferno. 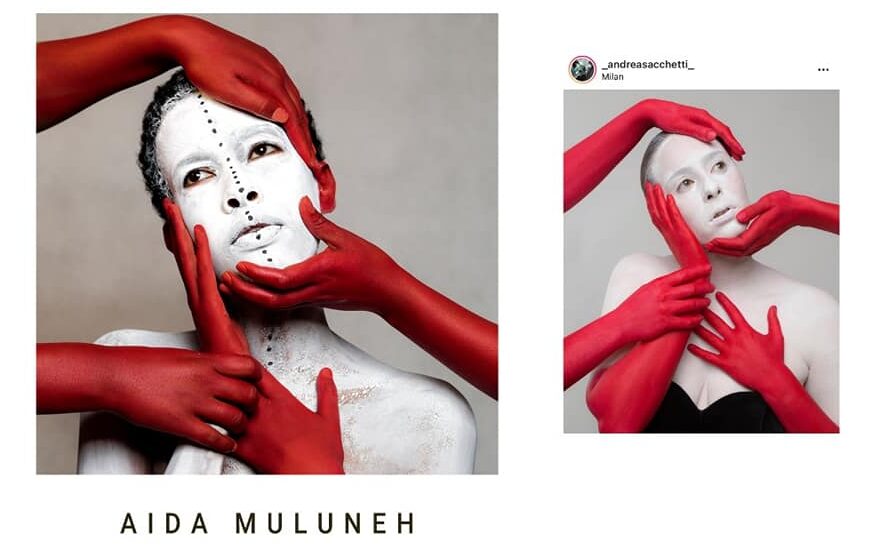 As seen above the Italian student photographer, Andrea Sacchetti, clearly copied Muluneh’s image, and had it shown in an exhibition at a prestigious photo festival.

Muluneh’s image is from The 99 Series, a project commissioned by the Smithsonian’s National Museum of African Art that ‘demonstrate the ongoing global relevance of the themes addressed in Dante Alighieri’s 14th-century epic poem, The Divine Comedy‘.

The Addis Ababa-based photographer told global arts institution, David Krut Projects, that The 99 Series, at the very least, is ‘trying to express what it is to be an African woman; to encapsulate gender and identity; to situate it within the territory of colonial experience, even while as an Ethiopian artist formed and informed by the African Diaspora, she is an outsider of sorts’.

Themes of cultural identity, colonialism, and challenging African stereotypes often appear throughout her work. The World is 9, currently showing at the Ballarat International Foto Biennale, ‘pays homage to the defining characteristics of Ethiopian art as a counter to the rejection of these characteristics as “primitive” by a traditionally Eurocentric view’.

Sacchetti, from the Istituto Italiano di Fotografia, was also tackling Dante Alighieri’s Inferno and seemingly stumbled across Muluneh’s work during his research. The Milan exhibition describes the young photographers as having ‘moved with remarkable creativity, pursuing personalities, recreating situations, using symbols, tracing atmospheres, using different expressive tools to immerse themselves in a painful journey marked by the gradual removal of light’. …And maybe a little plagiarism?

Muluneh isn’t happy about Sacchetti’s approach, believing he felt able to get away with it due to his ‘western’ privilege.

Here is her full statement from Facebook:
‘They say imitation is a form of flattery, but plagiarism is an artistic violation. It has been brought to my attention that my work was copied by an Italian photographer who will be showcasing his work at the Milan photo festival. The problem that I have with of this level of plagiarism is not just about my work, but also about the unsettling feeling I have as it relates to “western” privilege in the sense that clearly the photographer figured that since I am based in Africa I would not come across the blatant plagiarism of my work and theme. Even worse is the question of how the festival and curator are/were unaware of my very visible work. All of this raises some deeper issues relating to the diversity of photography festivals outside of Africa. It is evident that in Africa not only must we face the challenges of being photographers in our countries but that also we must face obstacles beyond our borders as it relates to opportunities, or lack thereof. It is one thing to be inspired by the work that I create but another thing to choose to blatantly copy the full image from color and position, to gaze and composition. I will not unpack the fact that he appears to have used a white model, as I’m sure at this moment it goes without saying. There is so much to talk about, and what has taken place is much deeper than a stolen artistic expression, it is a testament that some things may have changed… but some things remain stuck in a colonial context. ‘

PhotoShelter founder and CEO, Allen Murayabashi, noted in his podcast, Vision Slightly Blurred, that in some contexts  ‘it’s totally fine’ for students ‘to replicate images you admire’, but Sacchetti overstepped the line by not acknowledging the origins.

According to PhotoShelter, a now-deleted apology from the Milan Photo Festival on Twitter acknowledged the ‘identical’ image, and is translated stating ‘there was no will to plagiarise against such a prestigious author and we know that the young photographer has already apologised to the author’.

Murayabashi believes that by continuing to show Sacchetti’s photo, the festival ‘gives tacit approval’ for others to copy works by African artists.

‘At a moment in history when there is heightened awareness of uncredited appropriation from Black creators, this outcome is a sad commentary on the Milan Photo Festival’s attitude towards plagiarism and more specifically against the moral rights of an African artist.’

Muluneh is also the founder of Addis Foto Fest, a photojournalist, and has had work acquired by prestigious art institutions and museums around the world.