What’s wrong with this picture?

Dear TIPA,
I was scratching around for content for our website when I came across a report on the Digital Imaging Reporter website that the 30th Technical Imaging Press Association World Assembly took place in April, although Covid restrictions mandated that it be via Zoom. The story was accompanied by the image below of the virtual meeting: 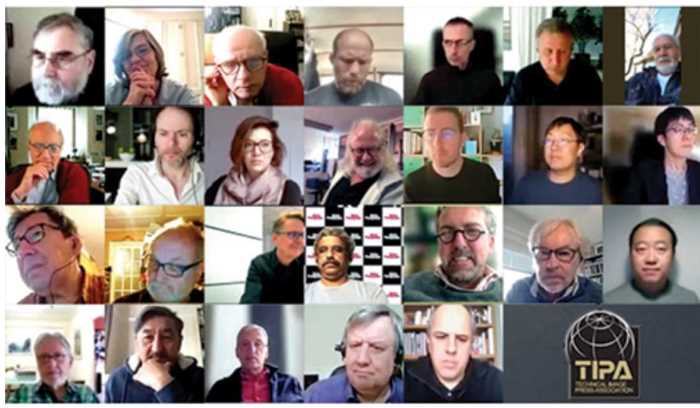 The report noted that ‘ a full complement of editors and representative of TIPA members from around the world attended.’ While I don’t want to come across as ageist, especially as I’m getting on a bit myself, this looks like a pretty venerable group to be representing the entirety of the photographic press. Some of these fellows were founding members 30 years ago. Maybe it’s about time to let a few younger people have a turn!

And another thing that struck me as odd was that there were way more people with beards than you would find in the general population. Let alone men in general. But now that I think on it, I personally don’t know many women ploughing the stoney fields of photographic journalism. Perhaps there could be a role for TIPA in redressing the balance somehow. It sounds like something that something called the ‘Technical Imaging Press Association’ should be looking at. Perhaps.

Instead you double down on your ever-expanding annual awards. When TIPA started out in 1991 there were only 5 awards. This year there are 40! So for instance there are three separate awards for APS-C format cameras: Entry-Level, Advanced and Expert. It’s getting noisy out there! If every second product on a camera store’s shelves carries a TIPA endorsement the value of that endorsement tends to diminish. I realise that the whole annual TIPA bandwagon rides on the revenue derived from product marketers’ use of the TIPA Awards logo, but perhaps the plethora of categories needs to be reeled in a bit. I mean ‘Best Photo Lab’? How on earth can you even make a call on that?

There’s another thing which I’ve noticed about the TIPA Awards over the years – it seems like a set of awards where every child wins a prize. These are the companies which won at least one camera category award in  2021: Panasonic, Canon, Fujifilm, Pentax, Nikon, Sony and Sigma. (Poor Olympus!) Of the 40 categories, there were no less than 24 separate companies up for an award. I’m sure it’s a co-incidence, but that makes for a nice, big prospect list. And it’s often like that.

Then there’s the ‘duelling banjos’ nature of the TIPA Awards versus your long-time rival, the EISA Awards. EISA stands for ‘Expert Imaging and Sound Association’ and ‘is the unique association of 55 special interest magazines from 29 countries’. The Technical Imaging Press Association represents another 25 specialist photo magazines. Both outfits are basically in a futile competition to be top dog in the awards racket. But having the two sets of awards diminishes the potential value of each of the award’s brands and can’t help but be confusing to people who take these things seriously. So wouldn’t it be a good idea to amalgamate and have just one set of awards? The venerable, united World Assembly could still have its glittering gala awards night in some salubrious location, but there would only be the one gala. A big gala. Because the truth is that two competing ‘most prestigious international awards’ is arguably two, but definitely one, too many. It’s just silly.