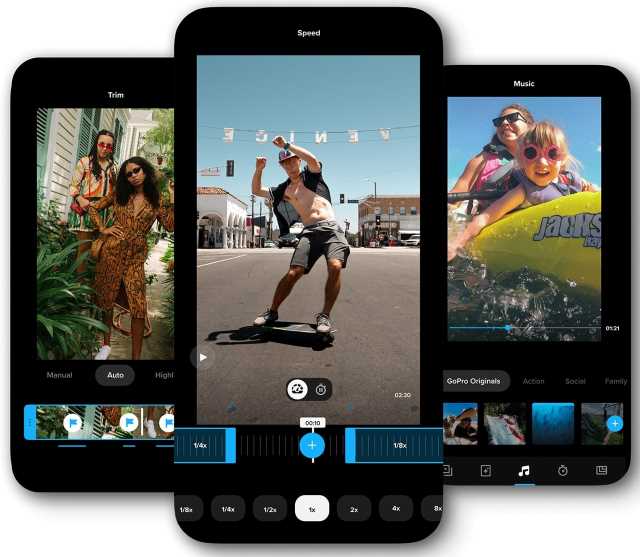 New features include:
– Unlimited importing of photos and videos from any phone or digital camera, including GoPros;
– Automatic video creation: Select the photos and videos you want to include along with a song from the included library or other audio files;
– Music tracks will automatically ‘beat-sync’ to your videos
– Editing Tools: Adjust exposure, contrast, color, vibrancy; single and multi-clip video editing; add text, stickers and more;
– Video Speed Tool: Speed up or slow down and freeze frame segments at multiple points within in a video clip;
– Exclusive filters and video edit themes;
– Frame Grabbing: Extract photo still images from your videos
– Post directly to Instagram, Facebook, YouTube and more, or share via text or email

If you share multiple photos or videos at once to Quik, they’ll be grouped together as an event and the app will produce a compilation highlight video beat-synced to music—which you can adjust to your liking, if desired.

Unfortunately, it looks like GoPro is de-bugging the new app at its customers’ time and expense, as well as taking a monthly fee. A scan of the most recent reviews in the Google App store show a considerable level of frustration, both with the fact that GoPro is now charging for something that used to be free, and with its performance.

The new app was only announced today, but already the complaints are flowing in. Most of the one-star reviews below are from customers who were familiar with the older version:

They never should have switched the old one to this. This doesn’t even have an easy to use interface or the same features. Terribly disappointed!

Worst update ever. It now wants to charge you a subscription in order to save your edit, and the app keeps crashing when you try to add another video to the timeline. WORSE UPDATE EVER. WILL NOT BE SUBSCRIBING AND WILL USE ANOTHER EDITING APP.

The older app was way better. Some of the edits require a stupid gopro subscription to save.

Lots of function lost like: video or image preview in gallery

The lesson for GoPro appears to be that if you decide to charge for something which used to be free accessory for the hardware you sell, you had better make darn sure it works better than the old, free version!