Yi plans to dethrone GoPro
Yi, a Chinese manufacturer of (cheap) mirrorless cameras, recently launched a 4K Action Camera which looks and behaves like a GoPro but costs US$250 – roughly half price.

The action cam can record 4K video at 30fps. It uses a Sony IMX377 image sensor and seven layers of optical glass which captures a 160° wide angle.

Like the GoPro Hero4 Black it is impact resistant but requires a waterproof housing, sold separately. This housing has the same plastic mounting as GoPro, effectively removing this clear market advantage from the action cam kingpin by allowing customers to use its accessories.

While slightly wider, the Yi 4K cam is the same height and depth as the Hero4 Black.

On the Yi website, it directly challenges GoPro by publishing a chart outlining the differences between its action cam and the Hero4 Black.

It has a newer processor and sensor, a 2.19-inch touchscreen, almost double the battery life (two hours), dual microphone compared with a single, faster power-on speed, and a bunch of other features which either match or beat GoPro.

The Yi has, well, ‘borrowed’ many things from GoPro’s design and function. The biggest difference is price. At US$250, compared with GoPro Hero4 Black US price of $500, a GoPro is an increasingly tough sell.

Strife at GoPro HQ
But that’s not all!

GoPro announced it will let go of 200 full-time workers – 15 percent of its workforce – which it tucked away in a press release outlining successful unit sales ahead of Christmas.

It seems that increased competition from the likes of Yi isn’t the only problem for GoPro, which has been troubled by financial issues this year.

Along with firing 200 workers, the entire entertainment division will be closed, and other facilities will be reduced. Open positions will be cancelled, and GoPro president Tony Bates will leave at the end of the year.

‘My time at GoPro has been an incredible experience,’ said Bates. ‘In the past three years, GoPro has seen enormous progress in camera technology, software and international growth. Today GoPro has a solid leadership team deeply focused on its core business and profitability.’

This restructuring is in an attempt to reduce expenditures and slow the company from what seems like an inevitable downfall.

Olympus E-M1 buggin’ out
Olympus has halted the latest firmware upgrade, 4.2, for its OM-D E-M1 mirrorless intechangeable lens camera after users reported it bugged things up. 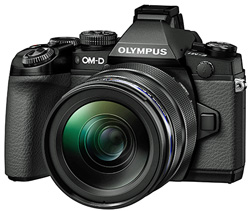 ‘Olympus has proactively suspended this firmware update in an effort to evaluate the reports,’ Olympus Japan said in a statement. ‘Olympus has been able to confirm that it is a unique group of settings that cause the issue.

The camera does not perform properly under the following conditions:
– Using HDR, Focus stacking, Hand-held starlight in scene mode, and keystone compensation with Rec view ‘Off’.
– When Rec view is turned on, the problem does not happen. Affected users are advised to turn Rec View on to avoid issues.

First ever Nikon sells for half a mill
At the WestLicht Photographica Auction in Austria a Nikon One, the company’s first consumer camera released in 1948, sold for €384,000 – or $551,000.

This is the highest price a Nikon camera has ever sold, making it the most expensive Nikon camera in existence.

The rangefinder camera is the earliest known manufactured Nikon camera. It came with a 5cm f2 Nikkor H lens, and an ‘original and extremely rare’ double strap ever ready case.

Bidding started at €90,000 and was expected to go as high as double that, but someone really wanted that camera!