Australian distributor, CR Kennedy, has announced the Pentax K-3 Mark III, a 26-megapixel APS-C DSLR camera, will be available from late April/early May with an RRP of $2899 (body only). 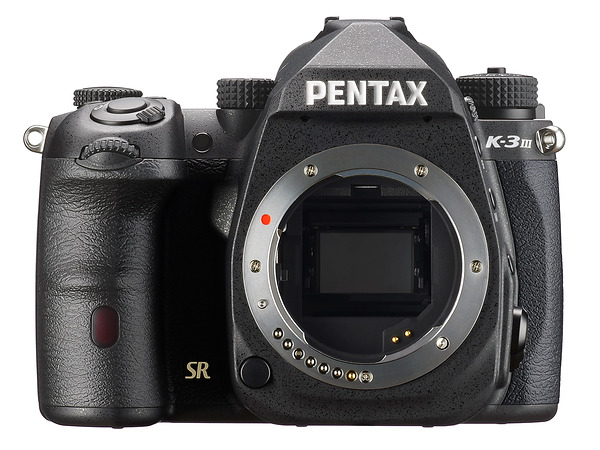 The Pentax K-3 Mk III features a black-illuminated (BSI) CMOS image sensor, with sensitivity going up to ISO 1600000. An anti-aliasing-filter-free optical design combines with the sensor to produce high-res images.

Pentax’s SR II in-body shake-reduction mechanism effectively minimises both horizontal and vertical shake, to deliver sharp, blur-free images, even in ‘shake-prone conditions’ such as using a telephoto lens, or shooting low-light scenes without a flash. The compensation effect is approximately 5.5 shutter steps, the highest level Pentax has achieved thus far.

Like other Pentax DSLR cameras, the K-3 Mk III has a pixel-shift system whereby the image sensor moves by a single pixel to create a super-high-res composite image, which Pentax says is superior to a conventional Bayer system.

‘Compared to the conventional Bayer system, in which each pixel has only a single colour-data unit, this system obtains all colour data in each pixel and delivers super-high-resolution images with more truthful colors and much finer details than those produced by the conventional system,’ Pentax states in the press release.

High-speed continuous shooting tops out at 12 fps in AF-S mode, thanks to a newly-developed mirror-driving mechanism, coupled with the Prime V imaging engine. In AF.C mode, it can capture at 11 fps.

When it comes to autofocus, the camera has a Safox 12 phase-matching sensor module, with the press release explaining this means there are 101 focus points, including 25 cross-type sensors position in the middle. This assures pinpoint focus on subjects at brightness levels as low as -4EV. Pentax adds that the new RGBIr image sensor has approximately 307,000 pixels and a new tracking algorithm to follow subjects moving at irregular or varying speeds.

Speaking of algorithms, Pentax has included a ‘real-time scene analysis system’, supported by none other than the latest Artificial Intelligence, to detect a subject’s face and eyes and make real-time analysis of movements.

Pentax is sticking to its guns with pentaprisms, so the optical viewfinder offers nearly a 100 percent field of view and magnification of 1.05 tyimes. A distortion-correction optical element delivers a clear viewfinder image free of distortion, with brightness improved by almost 10 percent compared with the K-3 II viewfinder.

The 3.2-inch LCD monitor has approximately 1,620,000 pixels, and for a Pentax K-series first it includes touch screen control.

And, of course, all Pentax K-mount cameras have electronic connectivity with legacy lenses.