Panasonic has announced December availability of its latest L-Mount lens, the portrait prime Lumix S 85mm f/1.8, with an RRP of $1099. 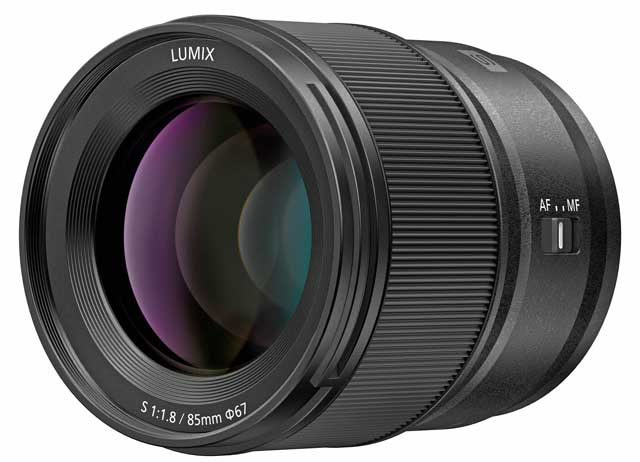 Panasonic has indicated this is first in a series of four f1.8 lenses for the L-mount, with a 70-300mm also in the pipeline. All these lenses will a similar design and common 67mm barrel diameter.

The Lumix S 85mm Compact weighs in at just 355 grams and is 82mm long, with dust and splash resistance.

Firmware smartens Lumix S-series performance
Panasonic has also announced firmware update programs, available from November 24 for its Lumix S1H, S1R, S1 and S5 and DC-G100 cameras which will improve autofocus and video performance:
– AF improvements introduced with the S5 will be available on the S1R, S1H and S1 for both video recording and still shooting. In addition to the eye, face and body, the head is also separately recognised by real-time detection technology to provide more precise focusing. The camera keeps tracking subjects when they move quickly, turn away, tilt their head or move far away from the camera. Also, improvements to DFD technology have enhanced AFC, which allows the camera to keep tracking small or fast-moving subjects.
– Human/Animal recognition can be set ON or OFF when the AF mode is set to [1-Area] or [1-Area+] with all four cameras.
– [AF+MF] can be used during video recording with all four cameras.
– Recognition performance during video recording in V-Log has been improved in the S1H S1 and S5.
– [SS/Gain Operation] function has been added. (S1R S1 S5)
– [Red REC Frame Indicator] is available. (S1R S1)
– It is possible to play back vertical videos vertically. (S1H S1R S1)
– 4K video files can be transferred to a smartphone via Wi-Fi. (S1H S1R S1)
– [Horizontal Image Flip(Monitor)] / [Vertical Image Flip(Monitor)] enables to reverse or not to reverse the monitor image when the free-angle monitor is rotated. (S1H S5)

The S1R update will also include:
– 5K (4992×3744) video recording in MOV is available.
– [Like 2100(HLG)] has been added in [Photo Style] to support 10-bit HDR video recording.
– High-Resolution audio recording using an XLR Microphone Adaptor DMW-XLR1 is available and it can be controlled with [XLR Mic Adaptor Setting] menu for MOV files only.
– [Luminance Level] function supports the 10-bit mode.
– 4K 60P/50P 4:2:2 10-bit video output over HDMI is supported.