DJI, the consumer drone market leader, has announced the Mavic Air 2 drone is available from mid-May with an RRP of $1500. 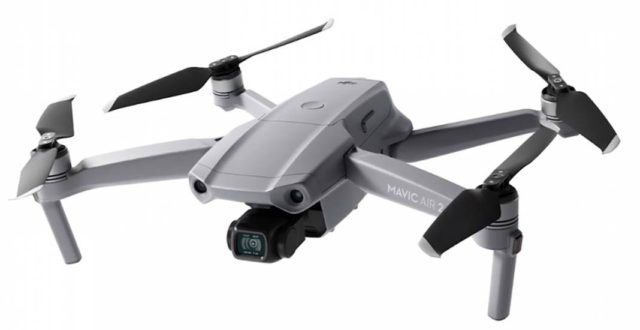 The inaugural Mavic Air, released two and a half years ago, was the first of DJI’s ‘ultraportable’ and super safe drones, ideal for beginners and hobbyists.

The Mavic Air 2, described by DJI as the ‘smartest and safest’ drone to date, boasts a bigger camera sensor and longer battery life. The trade off is minor – it’s slightly heavier, weighing 570 grams up from 430 grams.

The larger battery provides a maximum flight time of 34 minutes, considerably higher than the 21 minutes of the Mavic Air.

The camera has a 48-megapixel 1/2” Quad Bayer CMOS sensor and 24mm f2.8 wide-angle lens. The CMOS sensor can capture 4K footage at up to 60fps and 120mbps, as well as HDR 4x or 8x slow motion video in 1080p at 120fps and 240fps. While the stills camera automatically captures 12-megapixel images, a ‘feature’ allows the camera to record full 48-megapixel photos.

The camera has a three-axis gimbal to compensate shake and keep footage smooth and stable.

According to DJI, the Mavic Air 2 flight performance has had a complete overhaul. It has new motors, electronic speed controllers, and an aerodynamic design. Additionally, the OcuSync 2.0 transmission software is upgraded, to provide a ‘an extremely reliable and stable HD video feed from the drone at a maximum distance of 10km’.

Safety, safety, safety
As for the ‘unprecedented’ new safety features, the Mavic Air 2 has front and rear obstacles sensors, which warn the operator when they are too close or can be set to stop the drone from moving closer to an object. Auxiliary sensors at the bottom assist with smooth automatic landing, and DJI’s Geofencing helps keep its products away from being used in high-risk locations, such as airports.

The Advanced Pilot Assistance System 3.0 is an autonomous flying feature that uses 3D mapping to create a path around obstacles that come into its path.

Advanced Pilot Assistance System (APAS) 3.0 brings the next level of autonomous flying to DJI drones. When users enable APAS 3.0, as obstacles come into the drone’s path, Mavic Air 2 will create a new path around, under or over the object to avoid collision, giving pilots the confidence to fly in more complex situations while focusing on capturing their ideal images. Using 3D mapping, the updated version aids in smooth transitions and more fluid movements around objects even in highly complex environments.

The Mavic Air 2 is also the first DJI consumer drone to have AirSense technology, which receives signals from nearby airplanes and helicopters (known as ADS-B) and displays the location in the control screen. AirSense warns the drone operator with messages, sounds and vibrations, enhancing the pilot’s awareness and ability to move the drone safely away.