(Updated Feb 8): APPA-award-winning Melbourne-based commercial photographer, Lisa Saad, has been accused of including appropriated elements from work by Dutch architectural photographer, Marcel van Balken into a prominent image in her current portfolio.

The Australian Institute of Professional Photography (AIPP) is currently reviewing the allegations, and the process may take up to two weeks before a finding due to the ‘complex-multi-element digital illustration employing photographic elements’. In the meantime, the AIPP has responded to ‘significant comment in social media’ with a press release addressing the issue (published below).

Marcel’s image, Runner, is a photo illustration made using images of a detail of a modern railway station, Arnhem Centraal, in The Netherlands. Marcel told Inside Imaging he made the image in October 2017, and he has shot 70 pictures of the location with RAW files. 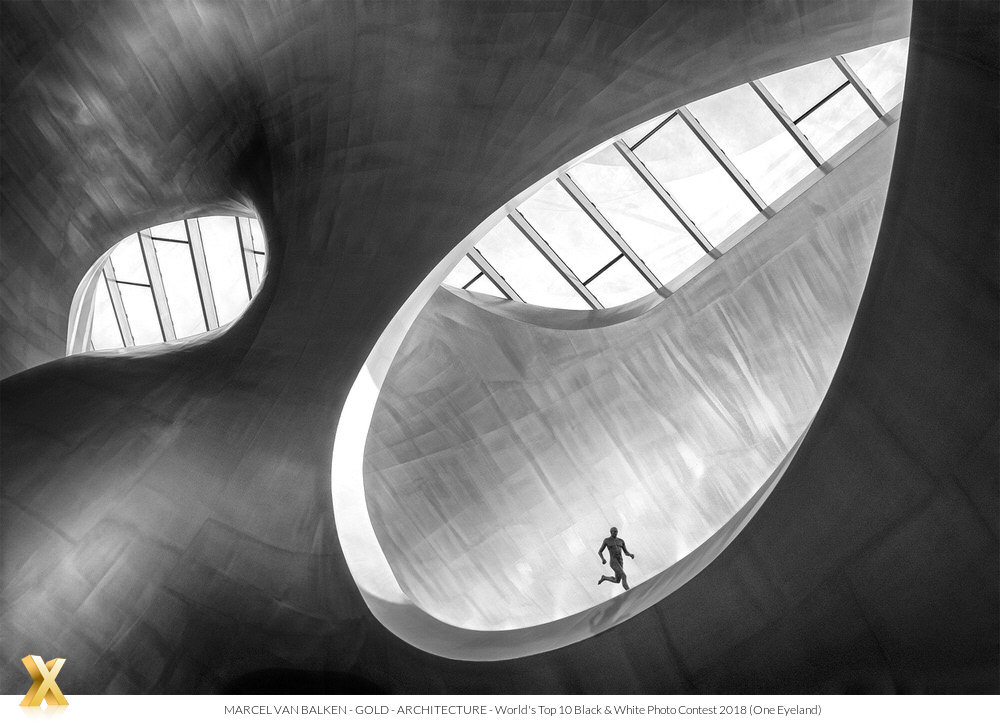 He said that Lisa didn’t contacted him to arrange use of his image for her photo illustration. Lisa denies her image incorporates his image.

He said he’s fairly certain that Lisa’s photo illustration has used the ‘(tear) drop shape’ from his illustration, and described it as ‘a shameful form of plagiarism’.

Marcel said he contacted Lisa, who provided a ‘strange explanation’ that denied any wrongdoing. He said she didn’t send a RAW file, and instead shared a .PNG screenshot of a slightly different photo from Arnhem Station, with separate EXIF files. He quickly found this picture on Google, credited to another photographer.

Since then there have been reports that Lisa now claims the image was based on shots of the Disney Concert Hall in Los Angeles.

There’s striking similarities between the two images – same location, focal length, and composition, with similar light and shade. They have been circulated around the Australian photo industry by an anonymous reader, who contacted Inside Imaging a week ago.

The reader noted that Lisa’s image was first posted in mid-2018, and was part of her award-winning APPA Commercial Photographer of the Year portfolio, and included in a number of other portfolios.

Lisa Saad is recognised as one of Australia’s top photographers, with an international reputation at stake. At the time this scandal broke, she had just returned from the SWPP convention in the UK where she presented a Masterclass ‘on how to conceptualise, design and edit images in Adobe Photoshop’, gained her Fellowship in Illustrative Photography – IFSWPP – and participating in judging.

Lisa responded to Inside Imaging‘s enquiries with a request to hold off from commenting extensively until the AIPP had made its decision. She noted that the image in question had been accepted by the Society of Wedding and Portrait Photographers, with a decision also pending from the WPPI.

On the other hand, Marcel has gone public and the shared the accusation with Stop Stealing Photos, a website that names and shames people it believes are guilty of image theft.

Stop Stealing Photos questions why Lisa has begun deleting the photo from her social media and website. It says the photo can now only be tracked down via a Google Reverse Image search, and viewed in cached form. The AIPP has also ‘disappeared’ the image in question from its website.

Photo Stealers was contacted by Lisa Saad’s lawyers demanding it take down the posting, apologise and provide compensation. It’s perhaps a measure of Photo Stealers’ confidence its accusations are correct that it has ignored the legal demand, and since then accused Lisa of a second appropriation of a significant image in her portfolio.

The individual behind the Photo Stealers website, US photographer Corey Balazowich, is adamant that she has never made a false accusation in the five years the website has been running.

Significant comment has been made in social media in recent days about an AIPP prizewinning image by Lisa Saad, an AIPP member and leading Melbourne-based Commercial and art Photographer, following a posting in stopstealingphotos.com.

The AIPP became aware of the striking similarity of the two images in contention almost a week ago. Immediately a referral was made to both the Compliance and the Awards Committees of the AIPP for review, which is a long-standing standard process in such cases.

The AIPP does not usually comment on such matters until due process is complete. The AIPP is also committed to the presumption of innocence until a thorough and complete review of all the facts in a case are fully investigated. As has occurred on the rare occasions this type of situation has arisen in the past, where plagiarism or appropriation of another photographer’s work or a breach of entry rules has been found to have occurred beyond reasonable doubt, then any award or category prize that the image has been given may be withdrawn and returned.

A photographer entering the AIPP State Awards or the national APPA contest makes several binding undertakings relating to sole authorship, that all photographic elements are their own and that all the images and elements have been made within two years. A proven breach results in varying degrees of penalty. In a case of appropriation such an instance would also be a breach of the AIPP’s code of conduct and may result in suspension, amongst other matters.
Investigations of this nature are not always simple, especially in complex-multi-element digital illustration employing photographic elements.

The AIPP believes that in the interests of natural justice the review process now under way should continue professionally and without prejudice. Once the outcome of the review is complete then the AIPP will act according to the findings. The process may take up to two weeks to determine.

The AIPP, regardless of the outcome in the case currently under review, abhors the immediate assumption of guilt and the public expression of that in some recent-day social media posts. This is highly damaging to fair and natural justice or impartial judgement and to the profession of photography. Such assertions as observed in some forums are both slanderous and tantamount to a mob mentality. Social media does not provide freedom from prosecution under several laws in Australia for such behaviours. Regardless of the facts in this case, the AIPP believes everyone should be presumed innocent until due process is complete and the case proven otherwise.
– John Swainston, National President For the AIPP.

Below is a video from Stop Stealing Photos which strives to show the similarities between the two images: