The new tripods are up for pre-order from 3LT distributor, Blonde Robot, with the Jay available for $993 RRP and Mike at $1123 RRP, as well as in kits.

Before jumping into the specs, first we’ll cover the unusual naming approach adopted by 3 Legged Thing. The company’s founder and CEO, Danny Lenihan, has drawn inspiration from the punk rock and skateboarding scene. Jay is named after the late Jay Adams, a loose unit from California who brought pioneered modern skating by bringing elements of surf into the fray; and Mike is named after Mike McGill, on of the most famous skaters in the world.

‘Legends is a back-to-the-drawing-board look at how we use and need tripods in modern photography and videography, with ideas dating back five years that we had previously left undeveloped,’ Lenihan says. ‘With emphasis on workflow and user-friendliness, we’ve simultaneously lowered the weight, and increased the load-to-weight ratio, without compromising stability or rigidity. We’ve added advanced functionality, the likes of which have never been seen before, and made major aesthetic changes for our most incredible tripod range to date.’

The tripods use a levelling base system that enables smooth and fast set up on challenging terrain, and features a friction control to finely adjust positioning.

All the tripods legs are detachable, allowing the system to be used as a monopod, or as boom arms for lights or microphones – or both. With the legs removed the tripod can also be used on table-tops or at ground level by joining a set of 3LT’s tripod footwear to the leg hinges. This enables both Mike and Jay to be used for macro work, bringing photographers a varied range of perspectives from which to shoot.

With the addition of 3LT footwear, the levelling base can also be used as a foot stabiliser for a monopod leg, adding an extra level of versatility to the products. The tripods come with stock rubber ‘Bootz’, which can be replaced with one of four varieties of alternative footwear.

The tripod leg locks have an external design with raised O-Pads for improved grip and leverage. Internally, the locks have been engineered with a new design of ‘Chicken Lips’, or shims, which give the locks greater strength and grip.

The tripods are constructed from eight layers of carbon fibre, and aerospace-grade anodised magnesium alloy, to provide durability and strength.

They also feature 3LT’s new Rapid Latch, a ‘hardwearing anodised mag-alloy latch with auto-engage lock’, which is used to open and position the legs. The Rapid Latch is designed to make adjusting the legs quick and simple, even when wearing thick gloves or for folks with disabilities or hand injuries.

Both tripods are also available in kits with 3 Legged Thing’s new AirHed Cine video head. The video head has an adjustable, fluid motion tilt mechanism that offers smooth movement with direct control. The arm can be fitted to either side of the head for right or left-handed operation. The AirHed Cine is available with a choice of standard video clamp and plate, or an Arca-Swiss compatible clamp and plate, and features a ¼”-20 thread for externally mounted devices such as articulated arms.

More tripods in the Legends range, including the Ray, will be available in the coming months. 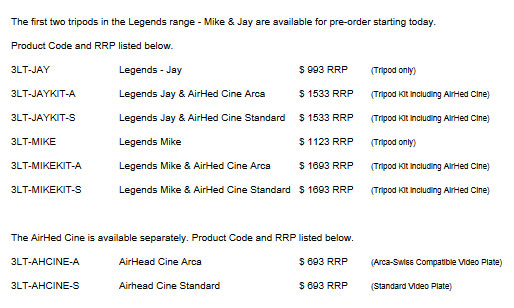