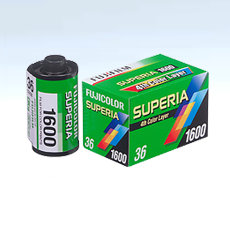 Fujifilm discontinues Superia 1600 and 800
Those retailers and film users who source unavailable-in-Australia film from overseas may feel the need to stock up on Fujifilm Superia 1600, which along with Superia 800 is being discontinued in 36 exposure rolls.

As Superia 1600 is not supplied in 24-exposure rolls neither, it’s effectively the end of that particular product.

Fujifilm Australia supplies a smaller range than Fujifilm US. Here the only colour neg films listed by Fujifilm on its website are Pro 160 S, Pro 160 C and Pro 400 H. (Although some retailers have Superia listed for sale.) Superia in 100, 200 and 400 speeds will remain available in the US.

The HVL-F60RM has a guide number of 60 and covers illumination angles from 20mm to 200mm with continuous shooting up to 220 flashes.

The use of heat resistant materials and new advanced algorithms means heat resistance has been increased by as much as 4x compared to the previous model.

Recycle time has been reduced to 1.7 seconds or just 0.6 seconds with the new External Battery Adaptor, the FA-EBA1.

Quick Shift Bounce, a favourite of other Sony flashes, is featured and allows the photographer to shift from horizontal to vertical orientation, 90 degrees left or right, upward by up to 150 degrees, and downward by 8 degrees, for flexible positioning and optimum lighting for a wide range of scenes.

In addition to an auto white balance function that automatically adjusts for light colour in the scene being photographed, amber and green colour filters are supplied as standard and can be used to match or complement existing lighting to achieve natural white balance or create a specific atmosphere.

Combining the RX0 with other Sony α  or Cyber-shot cameras via Multi Interface Shoe or a bracket/rig, photographers can use the RX0 as a secondary camera.

It also works for shooting video – the main camera’s shutter release controls both cameras. This enables the user to capture one moment in two different ways, with a variation of angle of view, depth of view or frame rate amongst other things. Its coiled cable design with right-angle connector keeps the cable tidy, and clear of the EVF whilst shooting.

Available from late April for an RRP of $99.

as announced the April availability of a 70-210mm f4 Di VC USD telephoto zoom lens for Nikon and Canon mounts, and the development of a 28-75mm Sony E-mount lens.

Tamron is describing it as a ‘compact’ lens, with a total length of 174mm and weighing only 850 grams.

The lens has the highest-in-class maximum magnification ratio of 1:3.1 and the shortest-in-class Minimum Object Distance (MOD) of .95m.

An internal zoom mechanism means the physical length of the lens doesn’t change, providing stable use and operation.

The AF drive system has an ultrasonic silent drive ring-type motor to ensure fast and precise focusing. But there’s also a manual focus override mechanism for photographers shooting with AF, which allows them to make fine manual adjustments without switching the AF-MF mode switch.

The high-speed standard zoom lens is Tamron’s way of signalling ‘plans to further expand and improve its lens lineup for 35mm full-frame mirrorless cameras, in addition to its lenses for DSLR and other mirrorless camera formats.’

That’s about it. For now!