Ektrachrome re-entry
Eastman Kodak Company has announced an aspiration to re-introduce the venerable Ektachrome slide film in both 35mm and Super 8 formats.

If it can successfully reformulate and manufacture Ektachrome, plans are to re-launch in the fourth quarter of 2017. It was discontinued in 2012.

Kodak will produce Ektachrome at its factory in Rochester, NY, and will market and distribute the Super 8 motion picture film version directly. Kodak Alaris plans to offer Ektachrome in 35mm, 36-exposure rolls.

By way of background for ‘digital natives’ Ektachrome generates a positive image that can be viewed or projected once it is exposed and processed. It is also well-suited for scanning and printing onto a range of professional-grade photographic media and for commercial printing. Professional photographers in most fields outside of wedding/portrait photography and news photojournalism tended to use slide film rather than negative film prior to the advent of digital cameras.

The filters come in 67mm and 82mm sizes, and each is packed with a pair of step-up rings to allow them to fit to smaller lenses. The forward ring of each is also threaded so further screw-in filters can be stacked in front of them, and the bezel is moulded to allow a regular lens cap to be fitted.

Long exposures are fundamental to landscape photography, particularly in harsh light, and they also add a creative element to time lapses, making them more fluid. It’s possible to shoot time lapses shooting towards the sun using the Syrp Super Dark.

When setting exposure during the day, you are limited to using fast shutter speeds to account for bright conditions. Even when setting your aperture to f22 and ISO 100 the slowest shutter speed possible is half a second. Adding the Super Dark Variable ND lets you slow your shutter speed to at least 15 seconds even in the middle of the day.

We could only find a NZ RRP – $263.35 small, $320 large – on the www.syrp.co.nz website. The filters come with a protective leather zip-up pouch. Syrp distributes into Australia and has an interesting portfolio of time lapse and motion control accessories for DSLRs.

Photoshop alternatives gaining ground
The assault on the Adobe citadel appears to be shaping as a feature of 2017 with several companies now offering affordable alternatives to the whiskery old incumbent’s range – not to mention its rent-but-never-own business model. Among these is Serif, which has launched Affinity Photo for Windows (it already had a version for Mac) The new application offers photo editing capabilities similar to that of Photoshop, for only $79.99. 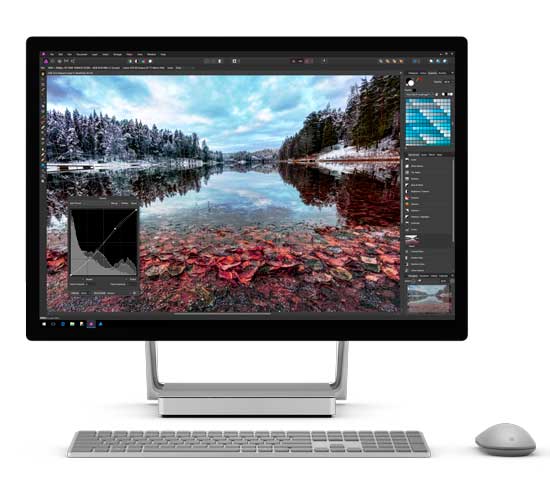 Serif joins On1 (Photo RAW 2017) and Macfun (Luminar) as competitors to the bloated and slow-moving market leader, whose last upgrades to its photo editing products were a non-event. Adobe will need to disabuse itself of the notion it has a captive market if it doesn’t want to see a slow bleed to these more customer-focussed competitors. At the high end, it also has the increasingly popular Capture One Pro 10 to contend with.

Canon USA upgrades photo book business
Canon USA has moved deeper into the commercial photo printing business with the announcement of the hdAlbum EZ service. The software solution is designed to enable users to quickly and easily create a photobook.

Building upon its hdAlbum service launched in January 2015, the enhanced hdAlbum EZ service features Canon’s new advanced EAGiAL technology. (hdAlbum? EAGiAL? What’s with the stupid, arrogant misuse of the English langUAge? Is it some kind of exotic dysLEXia?) Anyway Eagial automatically selects a user’s photos based on lighting, composition and also face recognition. Canon claims it is able to create a layout with a storyline.

Canon says the hdAlbum EZ software helps reduce the amount of time needed to select shots from a large collection of photos, as well as create and edit a photo book.
The app also has a built-in function to automatically capture still frames from video files.