Nikon Australia has announced mid-September availability of the entry-level D3400 APS-C fomat DSLR, along with VR and non-VR versions of a new 70-300mm telephoto lens. 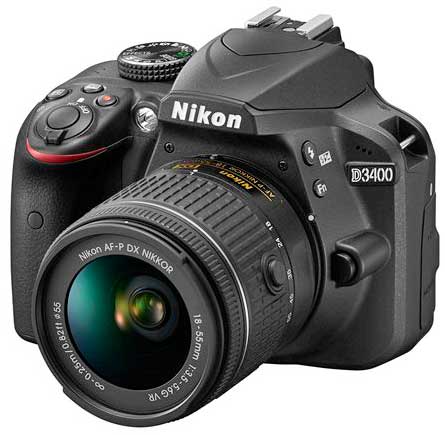 Nikon says the D3400 is for users ‘accustomed to shooting with their smart devices’ which must be almost everyone! It’s the first low-cost DSLR enabled with SnapBridge connectivity, which automatically transfers all photos taken with the camera to a smart device via Bluetooth. (For sales staff, there’s devil in the Snapbridge detail: Only JPEGs reduced to 2 megapixels can be transferred automatically. RAW/TIFF data and movie data cannot be transferred.)

The D3400 has a 24-megapixel CMOS with no optical low-pass filter for maximum detail.

‘With new and improved features such as an intuitive user interface, the D3400 is designed to give users greater freedom in image capture and video content creation,’ said James Murray, director, Sales & Marketing, Nikon Australia. ‘This entry-level DSLR is perfect for new photographers and connected users, offering consumers always-on connectivity for sharing images, in real-time across their social network of choice.’

Other features
– ISO from 100 to 25,600;
– Increased battery life  enabling capture of approximately 1200 shots with a single charge;
– Captures up to 16 shots in RAW format during continuous shooting at a speed of up to 5 frames per second;
– Dedicated Guide Mode (as in D3300), and a suite of retouch and special effects options;
– Monocoque structure for a more compact and lighter camera (than D3300), with smoother and more rounded edges for comfortable handling during shooting.