Fujifilm has announced the GFX 50S – a 51.4-megapixel medium format mirrorless camera – the first in its new line of GFX medium format cameras which it claims delivers the highest image quality in the company’s history. 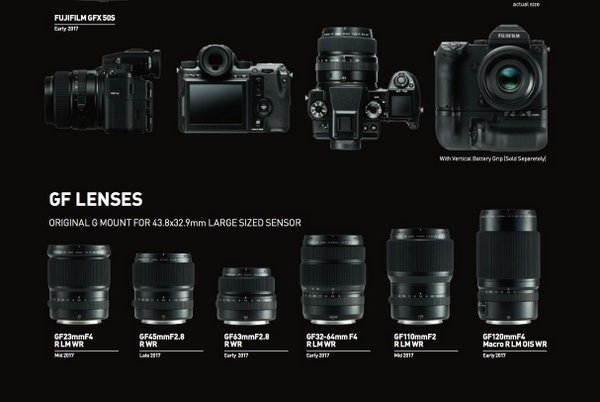 The new system has a 43.8 x 32.9mm sensor and a new large diameter G-mount, for which Fujifilm has developed six lenses under the Fujinon GF lens banner.

Fujifilm is calling the camera a ‘game changer’, saying it will ‘revolutionise’ the concept of medium format cameras with its light weight and compact form.

It has similar dials, buttons and grips found in X series cameras but has a detachable electronic viewfinder which can be removed when using an external monitor or wanting to reduce the systems weight.

It has a X-Processor Pro imaging processor which reproduces colour and tones at an ‘extremely high level’.

The first three lenses will be available from the start of 2017, while the remaining three will be released mid-to-late 2017.

All lenses feature an aperture ring and have a new C (command) Position on the ring to enable aperture adjustments with the Command Dial on the camera body. They are dust and weather resistant, handling temperatures as low as minus 10 degrees

Additional accessories, such as an optional adapter to fit the viewfinder in at any angle and a Vertical Battery Grip for enhanced functionality during portrait sessions, will also be available.